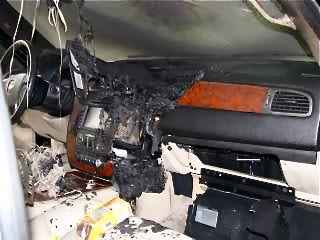 Back in 2003, Madelene had lost her father due to a massive stroke at the age 55. It was a traumatic time for all of us, because it was all so unexpected since he appeared to be in great shape and the best of health. Madelene then took a leave of absence from work to recover and regroup herself. In her line of work, they provided her with a company car, to which she used everyday for business and personal use. She had to give that up and her mom told her to just use her dad’s car for now. In itself, it felt awkward and sad to drive around her dad’s car, but at the same time, it comforted her as well. In the process of everything going on, she was also moving back in with me because we had separated for a few years and we were working on our relationship. She had a ton of her belongings in that car from clothes, old vinyl records from when she was a DJ back in the 80’s, a laptop that I got her for Christmas and a very old tiny bible that her grandmother had given her that she carried around with her everywhere.

For some reason or other, one evening while coming back to the house, she decided to leave her belongings in her car for just another night and remove some more clothes instead. She left all the valuable things still inside the car. We didn’t live in a high traffic area so I wasn’t too concerned. As long as the car was locked up and safe, what could go wrong? The next morning we were having coffee, watching TV while it was raining outside. The fog was so thick that you couldn’t even see the property any longer. I then noticed that it seemed as though we were in a cloud-like fog. I nudged Mad and said, “Look at that - the fog is so thick!” Then we heard my mother screaming outside, “Deb! Mad! Deb!!! Mad!!! Come out here now!!!” We rushed downstairs with our pajamas on and found Mad’s car (her dad’s car) was on fire. Mad picked up a garden hose to only find that a trickle would slowly turn into a drop. She then backed up and just stared at it. My father came out, hopped on his backhoe and began to puncture the top of the car so that it would release the air and fire trapped inside so that it wouldn’t make a huge explosion. We called the fire company and they all came rushing down the driveway to only have my dad in the way with this huge monstrosity of a machine gutting out the rest of her car and finally pulling it away from the house. The flames got bigger and the car was nothing but a charred frame on melted wheels. 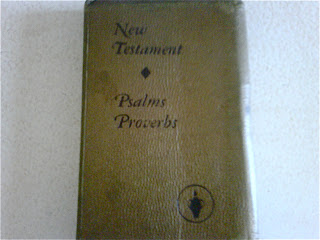 While watching this huge blaze, I noticed tears streaming down Mad’s face. I knew immediately what it meant and just stood next to her, hugging her, knowing that this was another sentimental thing in life being taken away from her. The car itself didn’t mean anything, but the fact that her dad was driving it weeks ago made the pangs of grief even more intense. After the car had cooled off and it was out of the way, she went inside and found all of her belongings either charred or just melted. All the expensive items were fried. The laptop I got her was a puddle of titanium. All of her classic records that were now at a much higher value were all gelled up, seeping out from the covers. The one thing she was able to salvage was the little old bible that her grandmother had given her with her favorite prayer that was inserted inside that was older than the hills. 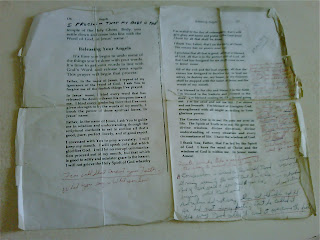 This is the prayer:

"It’s time you begin to undo some of the things you’ve done with your words. It’s time to get your words in line with God’s word and release your angels. This prayer will begin that process:

Father, in the name of Jesus, I repent of my ignorance of the Word of God. I ask You to forgive me of the foolish things I’ve prayed.

In Jesus’ name, I bind every word that has released the devil or drawn his weapons toward me. I bind every binding force that I’ve ever given strength to by the words of my mouth. I break the power of those spiritual forces, in Jesus’ name.

Father, in the name of Jesus, I ask You to guide me in wisdom and understanding through the scriptural methods to set in motion all that’s good, pure, perfect, lovely and of good report.

I covenant with You to pray accurately. I will keep my mouth. I will speak only that which glorifies God. I will let no corrupt communication proceed out of my mouth, but that which is good to edify and minister grace to the hearer. I will not grieve the Holy Spirit of God whereby I’m sealed to the day of redemption, but I will give glory and honor and praise to the Lord Jesus Christ for all that shall be done.

All of the evil and the bad report, all that the enemy has designed to deceive me, will lead me astray, to destroy me, my home, or my finances shall be stopped with the name of Jesus and the words of my mouth.

The Greater one is in me; He puts me over in life. The Spirit of Truth is in me; He gives me divine wisdom, divine direction, divine understanding of every situation and every circumstance of life. I have the wisdom of God.

I thank You, Father, that I’m led by the Spirit of God. I have the mind of Christ and the wisdom of God is within me.

In Jesus’ name.
Amen!" ~From the book, "Let Your Angels Work for You"

I still see Madelene every morning with this bible and reading her little prayer insert marked up with notes and other little scriptures that were jotted down from years ago. But imagine: every single thing in that car was charred up and melted down to nothing. The only thing standing out was the bible and her favorite prayer. That’s why I believe that the bible is powerful in many ways. There are stories such as bibles stopping bullets from penetrating people while having it let inside their jacket pockets. What explains every single item in that car demolished, except for this one special book?
Debra Pasquella miracles power of the bible