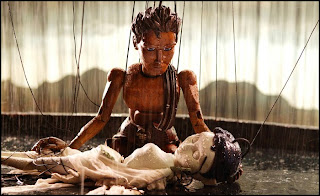 In the past I understood it more. I experienced the feeling of being in the grips of an ultimate control freak, or perhaps, the ‘emotionally kept’ woman who was scared to death to be herself, always wondering when the next explosive emotional time bomb was going to explode and fly off the handles for any given reason. Memories of hiding silly things, such as voice mails from my best friend that could have been interpreted as something else. “Well, why’d she say it like that?” It would always be my fault. I was always in the wrong. I’d end up hiding practically everything around her, including the “real me”. I ended up being someone else and crawled into a shell of fear.

I had lost myself for a while before I finally realized that the “real me” was dying to emerge from this Stepford Wife that I was created into. I’d find myself lying about the smallest of things, as opposed to the “real me” being very bluntly honest. “This is me, take it or leave it.” I missed that sonnvabitch that used to tell it like it is. I missed her so much that I brought her back full force, and with that, came eternal damnation from a vicious and scorned woman. Hell hath no fury - but I jolted that fury out with a good ol’ reality slap. What makes a person want to have complete control over another human being while being in a relationship? Insecurity? Fear of becoming powerless? Do they think that it’ll make a relationship better if one is the superior? The adrenaline of being in control must be the answer. The power to have someone be so submissive, so scared---maybe that’s it----people would rather be feared than loved. Or, maybe in a psychological view, it stems from a lack of love from childhood. I have no clue. I just wanted out.

“Love is patient and kind. Love is not jealous or boastful or proud or rude. Love does not demand its own way. Love is not irritable, and it keeps no record of when it has been wronged. It is never glad about injustice but rejoices whenever the truth wins out. Love never gives up, never loses faith, is always hopeful, and endures through every circumstance.” ~1 Corinthians 13:4-7

This, I have with Madelene. I don't remember anyone in my romantic past being patient and kind. Most were all jealous or boastful and of course, some were quite rude. They all demanded their own way and were irritable. They’d all drudge up the past and fight over things that were already resolved. They were extremely happy when they had “won” the fight. They would give up, lose faith and left as soon as the winds changed or if I was going through bad times. There’s a quote that I love from Marylin Monroe that says: “If you can't handle me at my worst, then you sure as hell don't deserve my best.” I think that speaks volumes whens someone only loves you when things are going smoothly, ie: conditional love. It is what it is.
I’ve always been in love with Madelene. I finally realized I loved her even more on a deeper level when she was sick in the hospital about three years ago. I thought to myself while holding her hand tightly with both of mine, “I’m always going to take care of you. I’m never going to leave you unless it’s my time to leave this earth.” I remember saying that in my mind as she slept off the morphine that kept her somewhat painless. I never wanted to see Madelene in pain like that ever again. As we both repeated after the minister, “To love you in sickness and in health.” I stood by my word and never looked back. That’s what true unconditional love is: to be there for the good times as well as the bad. People seem to give up so easily when things are going rough. People want to control one another and make them complete string puppets for their amusement or maybe for a lack of better words, for their own self-esteem and ego.

With the base of friendship being the foundation for any relationship you can't go wrong. Anything can be resolved at that point. The slightest thought to control your partner is a reflection of how you feel about yourself. If you’re lacking self-esteem and need an ego boost, I’m sure you’ll gain pleasure from pulling the strings that your partner is tied to. If you love your partner with absolutely no conditions, you’ll learn to cut the strings and let them dance on their own.
breakups control freaks Debra Pasquella healthy relationships unconditional love