Trying to Debunk the Paranormal 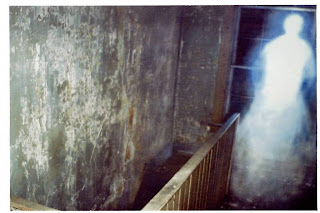 Some people believe in the paranormal and others are skeptics. Religious or people of faith tend to sway away from that topic and usually feel that it is very bad to communicate with the deceased, due to what the bible says about it. I’ve always believed there were ghosts only because I’ve experienced some weird happenings myself in my lifetime that just cannot be explained. Everything can be debunked though…everything. It is fun to think it was real.

Since I’m far more sensitive to the paranormal than the people who are close to me, I always refrain from telling them most of what I see and let them tell me what they see or experience. For example, when I lived in the apartment upstairs from my parents’ house, there was an older woman who wore a grayish housecoat with white hair. She was tall, lanky and of course, an apparition. I wasn’t sure if I was the only one seeing her. She mostly stayed in my old bedroom downstairs. I’d see her from the corner of my eye, walking from the living room into the hallway of where my bedroom was. She seemed timid and didn’t like to be noticed all that much, from what I could tell. I never said anything…until one day my father said something strange in his loud Brooklynite voice:

“Yanno, darez’ dis lady walking ‘round da’ house in a nightgown. I went ova’ to take a good look atter’ and she hid behind the couch like she was scared!”

I asked him if she was young or old, just to confirm.

Now, my father’s a ~big tough Italian no bullshit~ kind of guy. For him to tell me he saw exactly what I’ve been seeing is absolutely amazing. He could have just remained quiet and assumed that dementia was setting in, but like myself, this wasn’t his first experience witnessing spirits in that house.

While Madelene and I were lying on the hammock outside on the patio, the same lady came up to the screen door and took a peek at us. I saw her right away…and so did Madelene.

“Did you see that? Who’s that?” Madelene said, thinking it was an actual person. I was shocked that she even saw her. Madelene is more the ~down-to-earth logical need all the facts~ type of person.
“Did you see her? Did you see her?” I was getting all excited because now I knew it had nothing to do with my insanity.

Days later, my mom started seeing the same apparition, however she always had an explanation of who it was and why they were here. She explained that it was the woman who first owned the house who also used to see apparitions, but of Jesus in my old bedroom. (No wonder I’m such a Jesus freak, huh?) My mother wasn’t disturbed by it at all, since she has a lot of intuitions and is also very sensitive. A few times, my mother and I had the same dream and woke up explaining to one another about the details of it. Her and I used to jump into the same exact dreams and we were able to tell one another what we said and would be able to confirm it. We have a very strange connection in that regard, which is why I believe her so much. And, she’s not phased by any of it. I’m not sure what it means or what kind of spiritual gift we have, but it’s always interesting when it does occur.

Even in other people’s homes, I can sense things. I used to stay at a friend’s apartment a lot a couple of years ago. While working on a project on my computer one late afternoon, I kept sensing something mischievous and I also want to say “young”. I stared at my computer because the feeling was getting stronger and stronger. I was trying to write my first sentence in word document, but the first words weren’t written by me. As I kept staring, I saw with my own eyes these words type out one by one: b-o-o-! I chuckled and said out loud, “Oh come on, don’t do this to me right now!” I was never scared, because the energy was positive. It was an old 5 family Victorian house with a lot of history to it, including a massive fire years ago. It was rebuilt and redesigned somewhat.

Then my friend moved into a nicer and bigger apartment a few towns away. Even though this new apartment was cute and cozy, there was a sense of darkness that I couldn’t explain. The negative energy I sensed was so strong, that it brought on a lot of arguments and bitter spats between us. (This is my opinion about it though.) A few months later, after thinking it was just a bad sensory problem on my part, I was watching T.V. with my friend in the living room, when I noticed a black shadowy man walk by the dining room area. I looked over at my friend – not a flinch. She kept focused on the T.V. I watched as it moved from one side of the wall to the other. It was just a silhouette of a big and broad man. I decided to ignore it and chuck it up to just being tired.

That same night, I slept out on the couch as my friend was sound asleep in her bedroom. Each time I closed my eyes, something would fall out in the kitchen area. I walked in, being the brave ghost hunting soldier that I am and noticed that my friend’s refrigerator magnets were dropping one by one. Eh- no big deal. I noticed a spoon lying right near the toaster. As soon as I went back to the couch to close my eyes once again, I heard the spoon fall. I walked back over, but the spoon was gone. I looked around and noticed that it jumped from one counter to another.

Now it started to freak me out. I was up all night. When I got drowsy, magnets would fall on the floor from the refrigerator again, waking me up and scaring the living hell out of me. I’m usually not afraid in this type of situation, but this was a very dark feeling and it felt like “anger”.

Ever since the day my friend moved into that apartment, we did nothing but fight. Before the day of July 1rst of 2007, the day she moved in, we hardly ever fought and always enjoyed one another’s company. I don’t want to put complete blame on something that can be debunked and given factual reasoning, however in my own personal opinion and gut instinct, it wasn’t just us ruining our friendship. The tenants before that who were a couple moved out because they had a bad break up. That apartment was the darkest place I have ever been to. I was always scared to tell her about my experiences in that place, because she had to sleep there, but sometimes I just had to. During a heated argument, I asked her to pray with me, in separate rooms. I even went as far as secretly sprinkling holy water my mother had given to me all around her apartment. I burned sage as well, and covered the smell up by cooking and heating up cinnamon. All of these home remedies that people tell you to do didn’t work for this place. It got worse, to where I saw the shadowy figure all the time. I never said anything to her at that point, because the anger and bitterness was increasing and eventually our friendship had to end, last October.

Call it ‘cooky-wacky’, but I took every measure to rid that place of darkness, but it never worked. One year later, while talking to someone who knows the apartment complex inside and out, I was told that there was a horrific murder that took place inside that very apartment.

I wonder if that’s the cause of the darkness and bitterness which still dawdles around?