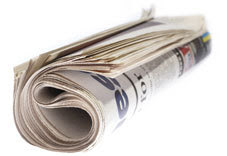 With the wedding bells coming to a halt and life beginning to go back to normal, I hear the hum of political jibber jabber on every news channel, personal blog, radio station, ----oh and my local newspaper. Yes, I read newspapers and I can tell you the sources too, unlike Palin.
Most of you know I was 100% for the McCain/Palin ticket. The more and more Sarah Palin speaks, the more I cringe. At first, I loved her. She rocked! I know that every politician lies, but for the love of God--------be a good liar! My father used to always say, “If ya gonna steal---steal big! Get yourself an armored car and run!” I’m sure all the ink from the money would spew all over my face like a fricken octopus, but probably well worth it.

Think about this: Sarah Palin isn’t fit or prepared to become our next president. Yes, I said “next president” because we all know that she’s literally one heartbeat away from the presidential seat. She can’t even name one newspaper that she reads. Her response was, “Ohhhhh, many.” She ran around that bush as if one of her ex-gay ministry convicts were chasing her. All newspapers have a lean towards the ‘left’ or ‘right’, and some you really can’t figure out because they want to cater to both. I’m sure if Palin did answer that question, she would be criticized for her love of a good democratic newspaper. I honestly believe that’s the reason why she didn’t answer.

Every question she gets hit with is too hard for her or she tries avoiding the truth. She can’t lie. Maybe it’s the Christian part that does this to her, but if you’re going into politics, be prepared to be the BEST liar ever. Can you imagine Palin speaking for our country in that “Fargo”-like voice? Nope. Can’t do it. She may look hot in a skirt, as good ol’ John already knows, but I need brains to go along with my good looking women.

The McCain/Palin ticket lost my vote.

I vote for Biden. Well, I really can’t. I refuse to vote for Obama due to links to terrorism, lack of experience and racial issues that have been known to come up to the surface, but many people I talk of are worried that if Obama does win, he won’t be in office long due to our Christian extremists and their fondness of Biden as well. Put 2 & 2 together and you have a disaster. I just don’t feel safe with Obama. I don’t believe he would be adamant about facing our enemies and protecting our country.

I refuse to vote. In my opinion, this election has horrible candidates who aren’t ready. McCain is, but is Palin? Obama isn’t, but Biden is.