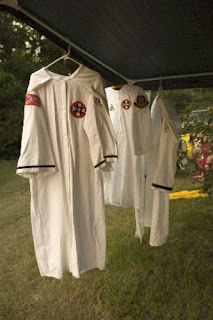 People never mention “white supremacists” because they’re hardly among us…or are they? In fact, there are so many of them among us that we don’t know about. Many are discreet and go about life like we do. Some people share their views, but don’t participate in violence towards African-Americans. Besides their claim to be “Christian” for most of them, their religion is much more than a title---it’s hatred towards human beings, period. They have no tolerance for anyone other than Caucasian, heterosexual people. None.

When I read what happened on CNN’s website, it left a chill down my spine.

"Federal prosecutors charged two men with plotting a "killing spree" against African-Americans that would have been capped with an attempt to kill Sen. Barack Obama while they wore white tuxedos, federal officials said Monday." ---read more.

This isn’t the first attempt from these types of people either. This is an ongoing “mission” to be planned and carried out. Although CNN reporters say that the plot could not be pulled off—my gut instincts say that it will eventually. These aren’t just people who hate the possible “new president”; these are people who have had an ongoing hatred with African-Americans. If it were a gay president running for office, he or she would be in the same danger too.

A few months ago, while speaking about politics with a friend who happens to be African-American, she stated that she and her family are voting for McCain, simply because they do not want to see Obama assasinated, even before he possibly gets in. She stated that they’re happy and proud of how far he has already come. But is that fair? Is it fair to just say, “Okay, you’ve come this far as a black man, now step down because you’re in danger”, and never let a black man in the White House? But, I do see her point too. They’re vote is for McCain out of fear, but the fact is, no president is safe.

Will you vote out of fear?
Barack Obama John McCain The KKK white supremacists