Another Reason Not to Vote 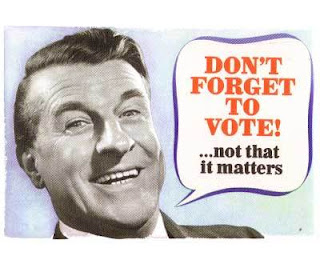 I’m so politically exhausted. I feel like screaming out of my apartment, “I HATE EVERYONE”, like a maniac running out of a psyche ward, but my neighbors would most likely call the guys in the white coats to come after me. What happens days before the election that people get so passionate and so vulgar with one another that it comes down to political blows and insults right into name calling? What are we trying to do?

You vote for Obama.

He votes for McCain.

Another refuses to vote.

Some vote for Paris Hilton.

Why can’t we just secretly have our political views, vote for who we want and just be happy with that, instead of attacking one another? Are we trying to change people’s minds? Are we trying to convince ourselves that our choice is the “right” one? Or are we just trying to be right?

In the end result, whoever wins, whichever candidate gets the royal crown, we all come together as a country regardless. Or do we? Does anyone still have passionate debates anymore after the elections are over? Remember when Kerry was running along with Bush? Oh, the debates were heated up just like this one. Everyone was chanting, “Kerry! Kerry! Kerry!” He was all the rage. I really thought he would win. Then, as rumor has it, many people’s votes were thrown out due to incorrect name information between driver licenses and how they have written their names on their ballots. Read here for more information. Thank you, Nick for pointing this out. I’m truly scared that our vote doesn’t count.

Aside from not liking the two candidates, (and let’s be real, it’s Obama against Palin), I'm wary about what happens to our votes. I am still on the fence about voting this year.

Yes, people have died for their right to vote, but I’m sure they would turn in their graves if they knew our votes didn’t count.
What do you think?
Barack Obama Joe Biden John McCain politics Sarah Palin vote