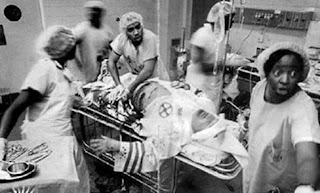 Yesterday was quite a day. The morning started out ok: had breakfast with my partner, cleaned the house, did some work and right after a phone conversation with a friend, I started to get severe chest pains. I’ve had many types of chest pains before- but this one was different. This started from my chest and made a beeline all the way down to my hands. Every jolt traumatized me. I finally collapsed and thought I should call 911, but instead I called Madelene. The last time I called 911, they charged me $500 for a ride down the road. No thanks.

Madelene picked me up and we drove 10 mph to the hospital. I love Madelene dearly, but the woman drives like an old bitty. It’s her heart that counts, right? Or is it mine??? Anyway, we’re slowly making our way into purgatory, or I should say, the ER when she comes up with this question: "Do you think it's gas?" This isn’t going to look too good because now I’m getting irritated by her questions.

Surprisingly, they rushed me in right away. Usually, the hospital staff sits and stares at you while they file their nails and pop their gum, jotting down medical information from you before admitting you. They treated me like some celebrity in there, rushing me from one nurse station to another. Then they gave me my own private little section and put on the good ol’ ass robe, as I call it. The gown was light blue with ugly paisley designs. They hooked me up to these little electrodes – the EKG machine and another nurse was taking my blood pressure while another nurse was wrapping an oxygen tube around my face and up my nose. As I’m hooked up to a million things, another nurse comes in with two cups – like in a psyche ward: one with water and a small cup with a pill.

I thought it was going to be something good. The 5th nurse came in and took 6 tubes of blood from me, and then, two x-ray technicians came into my section rolling this monstrosity of a chest x-ray machine in.

The nurse gives me a look and a smile and says, “Honey, that doesn’t matter, there are tons of ways you two can go about having a baby.” While she’s going on with her gay equality speech, I realized she was a lesbian herself with the ~almost~ crew cut hair style and rainbow key chain.

“I know, I know, I just wanted to stifle the ‘are you pregnant' questions." I replied. She takes the forms and puts these heavy led panels on top of me and tells me to take a deep breath.

The big problem with this hospital is waiting for the test results. We sat there for 6 hours before we got them back. While Madelene and I sat there staring at one another like a coupla’ buffoons, you couldn't help but overhear people talk. And, it’s amazing how so many people think their conversations are private, while all that’s blocking everyone are cloth curtains.

Through spurts of blood curdling screams from the psyche ward patient next to me being handcuffed to his bed yelling, “I’m gonna fekking kill you after I get loose you a-holes! Get me outa’ here! AHHHHHHHHHHHH”, I heard a doctor on the other side saying, “I just can’t vote for a black president. I just can’t do it. Being in my line of work, you see the majority of them and it’s hard for me as a democrat to place someone who will endanger this country.”

I look at Madelene’s response. Nothing. She obviously isn’t a good eavesdropper as I am.

He goes on: “It’s like a new fad where everyone gets this ‘change bug’ and goes crazy by wanting to fit in. This guy is going to win because people don’t want to appear as a bunch of racists.”

This is a well-educated doctor. Does it make a difference?

A nurse chimes in with the same sentiments. I can’t believe what I’m hearing. I truly believe that half this election is going to be based on pure racism, for both sides. One screams, “Don’t let the white man run again”, and another screams, “I don’t want a black president!”

I’ve been hearing this a lot lately, (even in the comment section of my previous post) and especially now that it’s down to the last days before election time. I just can’t get over that there are people that are admitting to their racism, but maybe that’s a good thing. We know it’s still out there, which is sad. I guess people will never 'change', even if “change” runs for president.

I’m ok though. The blood work, EKG reading and x-rays were all fine.

Diagnoses: stress.
(Although I am posting a lot about my dislikes about this election, I still have not chosen a candidate or even made the decision to vote yet. I do not lean one way or the other, but feel passionate about the reasons why people are voting.)
Barack Obama chest pains EKG emergency room Joe Biden John McCain Palin politics racism