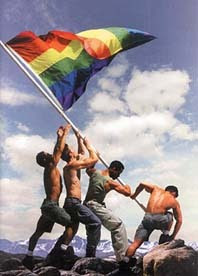 A lot of people say it doesn’t matter. They say they don’t care and ‘to each their own’, but the truth is, they do care, or at least they’re curious about it. There seems to be a major fascination with the unknown, and sometimes, there’s a bigger fascination with something that’s known all to well to them. When hit between the eyes with the question that tugs on their own sexuality, they pull away and say it doesn’t matter, or deny anything that has any involvement with them. There’s a saying that whenever somebody hates something about a particular person, it usually has a lot to do with whatever they hate about themselves. Do you find this to be true? I hate stubbornness in a person. The reason for that is because I’m stubborn myself. I don’t want to be beaten at my own game. (Probably a bad example), but you get my idea.

Repressed feelings can only be washed up ashore in a negative light. It comes off as defensive, combative and usually holds a sword of pain. Instead of avoiding what they hate, they draw towards it more; they focus on the very thing they detest. They mock and degrade whoever holds the one thing that the offender possesses: homosexuality. There are some people who are very comfortable in their own skin who aren’t afraid to touch upon issues regarding homosexuality. That’s another story. But when people who bash gays and lesbians for their orientation, it goes beyond the normal type of mocking. It hits upon the very issue that they struggle with themselves.

Religion. People brought up in certain faiths are sometimes raised with the mindset that homosexuality is a bad thing – it’s detestable to God. Even if a believer does hold this as truth, if he/she is not gay, they won’t focus totally on the issue. There are many other “issues” to tend to other than homosexuality. But, when you get somebody of religious standards bashing and mocking the homosexual community, it most likely has everything to do with their insecurity with their own sexuality. They’re not ‘trying to be more like Jesus’----they’re literally judging one another and throwing stones at everyone who seems to possess their similar qualities.

I had a person email me and ask me which church she should go to, since she’s gay and is also a believer in the trinity. I gave her a few options for the New York City area, and advised her to focus on God only while worshipping, and focus less on the people who are in there. She was scared of being judged by others. I suggested that she didn’t resort to other “lenient” religions, (which will remain nameless for now), and start with new age or other beliefs that may lead her astray from Christ. These “Christians” that she dealt with in the past judged her, ridiculed her and made her feel like less of a person. Reminder: Jesus would have never done that to someone.

Do you think religious homophobes, the ones who focus so much on homosexuality, are the ones that are repressing their own ‘cross to bear’?

Or, do you think that these people are genuinely trying to help homosexuals from a future of fire and brimstone?
bigotry Christianity Christians gay bashing God homophobic homosexuality