Do you believe that everyone has a purpose in life? Is it possible that some people on earth are just taking up space, with no reason to be here at all? People with faith in something larger than themselves, tend to believe that life is one big experiment, or that we, as people, need to learn and evolve from doing good instead of evil. It’s been said that it’s easier to hate, lie, cheat, steal, and to be unmerciful, rather than to be the total opposite. Being good is harder. 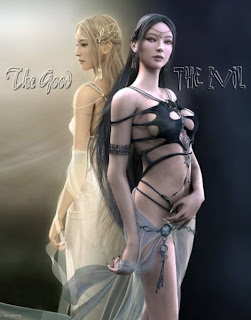 What’s good in people’s eyes? Most of all, what’s good in God’s eyes? Do you believe in God? If you do, then the biggest commandment is to love God with all your heart, and to love those around you. What does loving other people mean though? Does it mean you have to like every single person that walks on the earth? No, however, it means to treat others as you would yourself---the golden rule. It’s nice to live by, but is it realistic? I mean, we’re only human, right? There are going to be stumbling blocks along the way. The most difficult thing is to love your enemies. This doesn’t mean you have to call 1-800-FLOWERS and get them a bouquet, but wish them well and pray for them. Loving someone who does not love you in return is the most difficult thing. Hating them is easier. Cursing them is easier. In the heat of the moment if arguing, we sometimes lose our tempers, but again, we’re all human. We all make mistakes. Do we still take the easy road and continue to hate?

It may be giving the person the benefit of the doubt. It may be forgiveness and a change of heart. Or, it just may mean letting it go and moving on. It depends on each situation. In the aftermath of what’s been said and done, what’s been accomplished? Does it feel ‘good’? Do you feel ‘good’?

Again, what is good?

For me, it’s guidance from the Lord. It’s correcting me when I’m wrong. It’s admitting that I’m wrong. It’s knowing that I’m human and that I have no willpower without the help of God. It’s ‘good’ to realize and know these things about yourself. It’s a relief to understand the concept of needing God in your life. For me, my life without God is a reckless one. It’s chaos and uncontrollable reactions rolling down a huge mountain gaining more and more debris, until it finally crashes and explodes into tiny little pieces.

So what’s good about that?

It’s good to know that when we crash and burn, we learn from it and rebuild ourselves back up again. We’re most likely not to get into that same situation if we realize how bad it was for us. We’re smarter. We’ve developed coping skills of how to avoid the ‘crash’. I’ve been there. I’ve crumbled into a million pieces, but with God’s help, He’s rebuilding me up every single day.

To have never had the experience to learn from it all. To have never evolved from the person you once were, to someone who has gained the conscience of God through life trials. To not know that everything that has happened in your life was for a purpose; for a reason. To not gain the knowledge and the wisdom of God and to not know that you’re loved by God. To never learn forgiveness, because we’ve all been forgiven due to our faith in Him.

So, do you believe that everyone has a purpose in life? What’s your theory on why we’re here- regardless of faith or no faith- why do you think we’re put here on this earth? Some people get discouraged and think that God or (the universe) is this mean and wrathful force tugging at us all the time. If you really think about it, if you were God, would you tell your creations why they were put here on the earth? Or would you let them roam around, learning all they could, trying to develop better character? It's like fish trying to comprehend algebra. We can't fathom the meaning of it. What about the yin and yang? Is it possible there’s a reason for those people who are evil? There are two forces in the world that work against each other. There are also two forces that lie within ourselves that are at odds with one another.


Please take a look at Belladonna's post back in August. Thank you, Bella, for giving me the post link for this. It really touched on an important issue! You'll find this blog to be very interesting.
1-800-FLOWERS forgiveness God Good and evil hate love universe