- April 19, 2007
Have you ever wondered why police and other authorities wait until the last minute until something occurs? We call the police, thinking that there may be a threat to someone’s life, or even our own, and they simply say, “Well, unfortunately we can’t do anything, until something has taken place.” They won’t look into it, because they think it’s a waste of time. 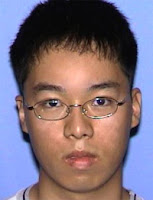 What about a troubled student, Cho Seung-Hui? People knew he was troubled and a possible threat, yet they literally couldn’t do anything about it…until it was too late. Shouldn’t threats be taken seriously? Shouldn’t the scare of someone with mental illness, to that extreme, be something to be afraid of? Or do we just sit back and watch it unfold? I don’t get it. Cho Seung-Hui even went as far as attacking Christanity. He wanted to be seen like Jesus Christ when he went down. So, the comments I got the other day regarding his relationship with God were right. He didn’t have a relationship with God- he attacked God and everything that Christianity stands for. There was absolutely no love in his message- only hatred for those who surrounded him.

We wait until the crime has been committed. We wait until the emotional turmoil of a madman has literally exploded into a thousand pieces. Even when someone says they’re going to kill themselves- a cry for help in a suicide attempt, sometimes we don’t even pay attention to it, or even consider the fact that they’re serious. If the seed has been planted, it’ll be sure to grow if it’s kept nurtured.

Studies show that if someone even talks about suicide, they’re most likely to carry it out. Some think that people who are suicidal are only trying to gain attention from others. Maybe some are, but “all” should be taken seriously.

Signs to look for:

There are so many signs I could list, but some of these listed above can be common for some people. I found myself in depressive states, where I was too tired, or didn’t get enough sleep and lost interest of some of my hobbies. It is a very general list, but when all of them are combined, or even ‘some’, it can be a warning signal for them to get help. It’s important to read the words they write as well. When someone is in a deep depression, they usually express themselves better in written form, whether it be in a journal, an online blog or their letters and emails to their friends and family. It depends on how they go about writing. A lot of us tend to say deeper things, rather than speak them. It’s easier for some reason.

In my own experience, my grandfather committed suicide. I don’t know the exact reasons why, but I know he had a lot of health frustrations that led him into a deep depression. On my mother’s side, my grandmother was manic depressive. She was on medication, which didn’t really help her all that much. She checked into a hospital to get help, but unfortunately, it made her worse. I’m against going into clinics that ‘try to’ help depressed people. Those places can only make you worse in my opinion. It’s all a business if you ask me. There’s nothing better than the help of your friends, family & loved ones to get you through rough patches. Professional help depends on if your doctor fits the needs of your condition. Not all doctors are good. Most of all, the best help is getting it from God, if you do practice a religion.

But it’s not that easy. It’s easier said than done. Once in a depression, a lot of people will ‘choose’ to isolate themselves, becoming unavailable to everyone. They have no desire to talk or communicate with anyone. Regardless of the problem, they feel that it’ll never go away. It’ll never get better. Hopelessness sets in, and it can either snowball downhill, or dissolve with help- however they choose to get help. If they don’t want help, then that’s the tricky part.

If you know someone who’s depressed, make sure they have your support. Make sure that you’re there for them, and that you take every word they say seriously. Listen to them and try to understand where they’re coming from, instead of arguing with them that their thoughts are irrational. It’s “their” thoughts. In their mind, it’s not irrational. Stand in their shoes for a moment and look into their world. It’s much different. Let them know how much they’re loved, and how many people they’ll affect if they take their own life. Give them a taste of reality and what it would be like without them in the world. It’ll get them thinking. Maybe you’ll be the one to help them out of this sinkhole they’ve created…or in their minds, what other people have created.

And if you’re the one depressed, tell a close friend that you trust. Confide in them and let them see the world you see through your eyes. Try to explain what it’s like to be you. Most of all, try to express what it is that makes you not want to live. What bothers you the most? Why are your days filled with sadness? What can they do to make it different? And most of all, what can you do to make life better?

I know, because I’m there from time to time. I can relate. I totally understand what my grandmother went through- God bless her soul!
This video deals with VT and the massacre. It sends a good message at the end of the song if you watch it all the way through.
Cho Seung-Hui depression manic depressive massacre medication mental illness psychiatry psychotherapy suicide