Trust in the Lord with all your heart; do not depend on your own understanding. Seek his will in all you do, and he will direct your paths. ~Proverbs 3:5-6

Our own understanding is not enough. We need more. I need more. When your trust in God becomes genuine, more contingent, then your faith brings you to a whole new level of a different type of understanding. Questions that we raise, “Why did this happen God”, will soon be a matter of relying on God’s plan. God sees the big picture, while we see just a small scope of it. We pray, but sometimes we pray ‘hoping and wishing’, instead of ‘expecting’. If you pray without faith, and I talk about faith in the terms of not ‘believing’ that God will come through with it, then it may not be answered. Pray and expect. It’s as if you ask God for something and think, “Well maybe He’s not able to do that kind of thing…” You underestimate him basically.

“You didn’t have enough faith,” Jesus told them, “I assure you, even if you had faith as small as a mustard seed you could say to this mountain, ‘Move from here to there,’ and it would move. Nothing would be impossible.” ~Matthew 17:20

Acquiring faith may be hard for some. Some people develop their faith through testimonies, miracles or through the teachings of other people. The best way to gain faith is to have a close relationship with God. Prayer, meditation and being around other believers keeps a stronghold on your ability to rely on God’s promises. You won’t have to doubt anymore, you’ll know for yourself through your own beliefs, that God is real. Consistent closeness to God keeps your faith growing stronger and stronger to the point of “knowing”, instead of just believing.

There are many people who believe that obeying the law and doing good deeds will get them a fast ticket into heaven. Wrong. Without a relationship with God, none of your good deeds will be noticed. It’s not done with God’s blessings. In the bible, Paul told Peter something that most people cannot fathom.

“You and I are Jews by birth, not ‘sinners’ like the Gentiles. And yet we Jewish Christians know that we become right with God, not by doing what the law commands, but by faith in Jesus Christ. So we have believed in Christ Jesus, that we might be accepted by God because of our faith in Christ-and not because we have obeyed the law. For no one will ever be saved by obeying the law.” ~Galatians 2:15-16

There are way too many so-called “Christians” that tell us we’re going to hell because we’re gay, or we’ve committed sins and that we’re not right with God. Who are they to criticize us, when God is the only one that can judge us? It’s hypocritical because we’re all in this together. Never listen to a mere human tell you about your destiny with God. They have absolutely no right. But, if they are sharing their beliefs with you, in a manner that doesn’t condemn you, then that’s okay. Sharing your beliefs is much different than casting people off to hell, when you don’t have the authority to do so. It’s basically like me arresting someone for robbery. It’s not valid, because I’m not a cop!

What about the “immoral woman” in the bible?

“Jesus Anointed by a Sinful Woman” 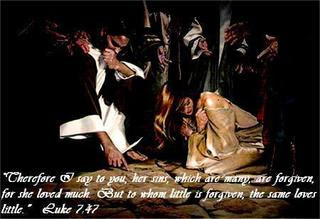 One of the Pharisees asked Jesus to come to his home for a meal, so Jesus accepted the invitation and sat down to eat. A certain immoral woman heard he was there and brought a beautiful jar filled with expensive perfume. Then she knelt behind him at his feet, weeping. Her tears fell on his feet, and she wiped them off with her hair. Then she kept kissing his feet and putting perfume on them. When the Pharisee who was the host saw what was happening and who the woman was, he said to himself, “This proves that Jesus is no prophet. If God had really sent him, he would know what kind of woman is touching him. She’s a sinner!” Then Jesus spoke up and answered his thoughts. “Simon,” he said to the Pharisee, “I have something to say to you.” “All right. Teacher,” Simon replied, “go ahead.” Then Jesus told him this story: “A man loaned money to two people—five hundred pieces of silver to one and fifty pieces to the other. But neither of them could repay him, so he kindly forgave them both, canceling their debts. Who do you suppose loved him more after that?” Simon answered, “I suppose the one for whom he canceled the larger debt.” “That’s right,” Jesus said. Then he turned to the woman and said to Simon, “Look at this woman kneeling here. When I entered your home, you didn’t offer me water to wash the dust from my feet, but she has washed them with her tears and wiped them with her hair. You didn’t give me a kiss of greeting, but she has kissed my feet again and again from the time I first came in. You neglected the courtesy of olive oil to anoint my head, but she has anointed my feet with rare perfume. I tell you, her sins—and they are many—have been forgiven, so she has shown me much love. But a person who is forgiven little shows only little love. Then Jesus said to the woman, “Your sins are forgiven.” The men at the table said among themselves, “Who does this man think he is, going around forgiving sins?” And Jesus said to the woman, “Your faith has saved you; go in peace.” ~Luke 7:36-50

Through her faith- and only by her faith, she was saved.

On this day, God gave us His only Son. Jesus died on the cross for our sins. He took away the old law and gave us freedom of choice. He knew we as humans could not live without our sinful, carnal nature. It was too hard for us. Jesus came down to earth to fully grasp this. He understood the struggles we had, because He went through it Himself. So, knowing what we went through by manifesting in a human body, He has taken away the old law, and instilled faith in us. If we believe that Jesus took away our sins by sacrificing Himself, then we’re saved.