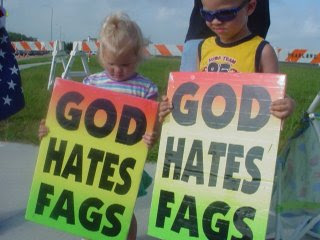 It starts out small. Sometimes it starts out when they’re just a baby. It depends on when the seed was planted. They call themselves “Christians” and speak the words of true hatred. They teach their children to hate and curse others. They twist the bible and reference scriptures left and right, that have no relevance whatsoever to what they’re trying to communicate. How do you recognize the seeds of hateful people? By their words. Their words speak a lot about their character. A person’s credibility relies on their words. Their actions are primarily focused on condemning and judging. Their target: homosexuals.

Here are some scriptures that are thrown at homosexuals:

Leviticus 18:22 (Whole Chapter) “Do not practice homosexuality, having sex with another man as with a woman. It is a detestable sin."

This is the old law. If this were to still be applicable, then eating shellfish would be detestable, having a clean-shaven face would be a sin, and sitting next to a woman on the same couch who is menstruating would be a sin as well. Galatians 17:21 proves that the old law no longer applies to Christians.

The people who shout this scripture to the gay & lesbians also seem to be missing a very valuable portion of this passage. In the next verse, it says this:

Verse 11 says: "And that is what some of you were. But you were washed, you were sanctified, you were justified in the name of the Lord Jesus Christ and by the Spirit of our God."

Now look at this next scripture that they’ll force-feed you, in order to sway you away from loving someone of the same gender.

Romans 1:26-27: “Even the women turned against the natural way to have sex and instead indulged in sex with each other. And the men, instead of having normal sexual relationships with women, burned with lust for each other. Men did shameful things with other men and, as a result, suffered within themselves the penalty they so richly deserved.”

Even before that verse, there’s another verse that clearly states what’s been happening in this book.

Romans 1:24 “So God let them go ahead and do whatever shameful things their hearts desired. As a result, they did vile and degrading things with each other’s bodies. Instead of believing what they knew was the truth about God, they deliberately chose to believe lies. So they worshipped the things God made but not the Creator himself, who is to be praised forever. Amen.”

Which sin is greater? Regardless of whether it’s a sin or not – (which I fully believe with all my heart it’s not), all of us sin. This is the reason why God gave us His only son to die for us on the cross. He saved us from our sins. He knew we couldn’t make it here without Jesus’ sacrifice.

Many Christians live life in fear. A healthy fear of the Lord is good, but when you fear other people’s judgments, telling you that hell is in your future, who do we believe? God is the only judge.

This is where religion gets scary. People plant the seeds of hate within their minds, due to twisting scriptures and claiming that they’re ‘fighting for their God’, when actually, they’re fighting against their brothers and sisters. We are all in this together. Take for instance, the Phelps family. They believe that all gays are doomed to hell. They protest with picket signs at funerals and parades displaying hate.


What would Jesus do?


Let’s just say that homosexuality is a sin. First of all, no one has the right to judge and ridicule them. What about the immoral woman in the bible? It’s about faith- and not anything else. If you fully believe that Jesus died for you up on the cross- you are saved.


“Jesus Anointed by a Sinful Woman”

"One of the Pharisees asked Jesus to come to his home for a meal, so Jesus accepted the invitation and sat down to eat. A certain immoral woman heard he was there and brought a beautiful jar filled with expensive perfume. Then she knelt behind him at his feet, weeping. Her tears fell on his feet, and she wiped them off with her hair. Then she kept kissing his feet and putting perfume on them. When the Pharisee who was the host saw what was happening and who the woman was, he said to himself, “This proves that Jesus is no prophet. If God had really sent him, he would know what kind of woman is touching him. She’s a sinner!” Then Jesus spoke up and answered his thoughts. “Simon,” he said to the Pharisee, “I have something to say to you.” “All right. Teacher,” Simon replied, “go ahead.” Then Jesus told him this story: “A man loaned money to two people—five hundred pieces of silver to one and fifty pieces to the other. But neither of them could repay him, so he kindly forgave them both, canceling their debts. Who do you suppose loved him more after that?” Simon answered, “I suppose the one for whom he canceled the larger debt.” “That’s right,” Jesus said. Then he turned to the woman and said to Simon, “Look at this woman kneeling here. When I entered your home, you didn’t offer me water to wash the dust from my feet, but she has washed them with her tears and wiped them with her hair. You didn’t give me a kiss of greeting, but she has kissed my feet again and again from the time I first came in. You neglected the courtesy of olive oil to anoint my head, but she has anointed my feet with rare perfume. I tell you, her sins—and they are many—have been forgiven, so she has shown me much love. But a person who is forgiven little shows only little love. Then Jesus said to the woman, “Your sins are forgiven.” The men at the table said among themselves, “Who does this man think he is, going around forgiving sins?” And Jesus said to the woman, “Your faith has saved you; go in peace." ~Luke 7:36-50

Your actions don’t mean anything if you don’t have faith. This woman displayed faith to Jesus, whereas the Pharisee didn’t. She was forgiven, in despite her sins.

Christianity is much more than just obeying the law. It’s having faith and love for Jesus. It’s loving one another and accepting each other ‘as is’---to not judge and ridicule for what you may think is wrong. God’s job is to judge. People are trying to fill God’s shoes. That’s quite a task to take on. They live such stressful and hard lives.

“All of you should be of one mind, full of sympathy toward each other, loving one another with tender hearts and humble minds. Don’t repay evil for evil. Don’t retaliate when people say unkind things about you. Instead, pay them back with a blessing. That is what God wants you to do, and he will bless you for it.

For the Scripture say,

If you want a happy life and good days, keep your tongue from speaking evil, and keep your lips from telling lies. Turn away from evil and do good. Work hard at living in peace with others. The eyes of the Lord watch over those who do right, and his ears are open to their prayers. But the Lord turns his face against those who do evil.” ~1 Peter 3:8-12 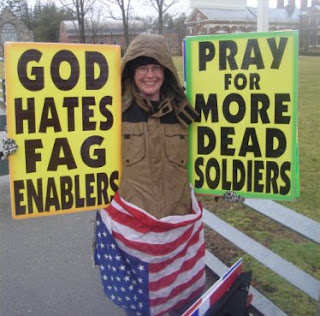 What is evil? Is evil loving another person of the same gender? Or is evil people telling others they’re going to hell? They protest with picket signs saying, “God hates fag enablers”, “Pray for more dead soldiers”, and “Fags will go to hell!”

That’s evil. Those who preach with a forked tongue, like my friend Mark, will hopefully understand that when you speak about God, it’s best not to curse at other people and judge them. God knows everyone’s heart and He is the only one who judges righteously. It’s people like Mark, who are the small seeds of the people who kill for their God. They’re quick-tempered and full of wrath. They have no mercy upon anyone. I wonder if he’ll get mercy when it’s his time to be judged. He’s not far off from the mindset of the Phelps’ family.

Remember, no one can judge you, but God. The worst sin of all is to hate God. If you have faith and rely on Jesus’ sacrifice as your salvation, then you are saved, whether you’re gay, straight, bi, trans, or even confused. God loves you more than anyone on this earth can!

1 Timothy chapter 4 tells us, “Now the Holy Spirit tell us clearly that in the last times some will turn away from what we believe; they will follow lying spirits and teachings that come from demons. These teachers are hypocrites and liars. They pretend to be religious, but their consciences are dead.”
Christianity gay hate crimes homosexuality lesbian Phelps sin