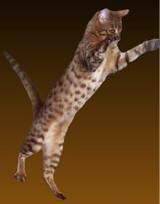 Total waste of a roaring tiger (Bengal cat) and a big vicious dog (Golden Retriever). There’s a huge dilemma going on at my sister’s house. This crap is baffling and mysterious. The average person could have easily overlooked this. But it all came to a head when something obvious was found.

My sister walks into her house after a long day of work. She sets her keys on the counter and decides to grab some food to cook dinner. She notices that a few of her canned goods were gone. She thought, “Hmm, maybe I used them and forgot about it…” Whatever. She continued to prepare dinner and notices that there’s coffee left in the pot. She doesn’t make coffee in the morning and neither does her boyfriend. So who made the coffee? It then trickles back to the thought of, “Who took my canned goods?”

Okay, aside from that, sis has to use the “ladies’ room”. She calls it that because she forbids her boyfriend to use the one in the bedroom. It’s hers. She has claimed it. No man can enter her office. This is off limits to those who have a penis. Out! The one in the hallway is the “men’s room”. This is where her boyfriend finds solace and peace from the everyday stressors of life. This is his throne. But occasionally, sis will access it for better lighting to put on her make up. Not fair you say? Dare to tell her that.

Anyway, she makes her way into her bathroom, and discovers the most horrific thing someone can imagine. It was almost as bad as walking into a shopping mall restroom and finding a package of goodies wrapped up in toilet paper. Yep, someone crapped big time and ran. A case of a “shit and run”? If that wasn’t enough, she was repulsed over the fact that there was only one square of toilet paper used. So now we’re on the lookout for a man with skid marks hyped up on Columbian coffee and possibly carrying a few cans of baked beans.

I think it’s time for sis to invest in a Rottweiler. 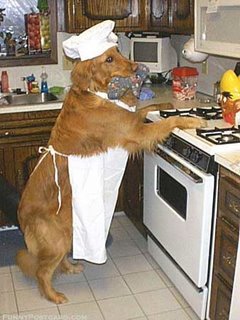 We have a feeling the Golden Retriever may be the culprit.