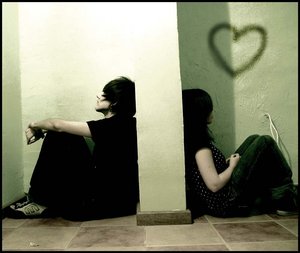 What’s the proper etiquette when a break up is taking place? What do we say to the ex or what do we expect from the ex? Do we say anything at all or do we simply just pretend nothing ever happened? I’d like to say it depends on the relationship and if the two people involved can engage in a cordial friendship. Can two lovers demote one another back to being friends? What if the relationship never started at as friends? See, there’s the problem right there. Any successful relationship has the foundation of friendship. Those who started right off the bat in a lustful and sexual way will most likely see negative results in the end. Or am I wrong about that?

The main question is, when do we finally let go of the ex? Do you remain in contact for a period of time before you part ways? Or do you linger on and torture yourself of what ‘could have been’ until you’re blue in the face? There are different types of people. You have your types of people where they hang on as long as they can. They don’t want to let go. Any communication from the ex will give them a glimmer of hope – regardless of how the ex feels. Is this self-torture? Or is it perseverance? They say love never gives up, but sometimes you have to walk away in order to keep your self-respect.

I’ve been on both sides of the spectrum. I’ve held on way too tightly when my ex and I broke up. I wanted constant contact. I wanted to be friends still. But, I wanted our friendship to go back to its original form. (That was only for me to know though.) But evidentially she knew that too. It’s tricky to try to nurture a friendship that was once intimate. There are a lot of complications that can lead to resentment. I’ve learned from past experiences that the only thing that helps with this is time. You need time to heal. The other person needs time to heal as well. Without that healing process, things that angered you before will come right up to the surface. You need all that static to wash away before trying to establish a friendship with the ex.

Stereotypical but true, most lesbians are best friends with their ex-girlfriends. It’s no secret that women have wonderful and close bonds with one another. I’m blaming it on estrogen. But the complications come in when the new girlfriend is like, “Well why are you always hanging out with her and calling her?” The girlfriend will insist that it’s “just a friend”. But how do they know that’s the truth? What if there’s an affair brewing? What if other things are being planned that’s not being told? Who wants to be jaded anyway? So our self-defense mechanism goes on and we start lashing out once the ex is in the picture.

The funny thing is, it’s rare to see heterosexuals still hanging on to the ex while with their new boyfriend or girlfriend. It has to be a very odd and rare situation if this occurs. But with the gay community, they have adapted this system of keeping the ex and they have it down to a science! Let’s admit it, we all have ‘baggage’ – who doesn’t? But when you start dating a packrat, then it’s time to reevaluate the entire situation at hand. I used to get upset when my girlfriend held on to precious photos and letters from her ex. But in reality, this is her past. Her past is what sculpted her to be who she is today. Who am I to tell her what she can’t keep from her past? I wasn’t in the ‘picture’ back then – so I can’t tell her to throw away old precious photos. It’s not right.

I seriously believe that insecurity plays a huge role when it comes to dating a girl who has an ex in the wings. What are you insecure about? Do you think your partner doesn’t love you enough and has thoughts of going back to the ex? Have you had past experiences that prove your theory to be true? We all have had our share of relationships that gave us grief due to cheating, verbal/physical abuse and/or lack of communication. Whatever the reason was for the harsh break up, never lose your self-respect. When an ex doesn’t call you, it doesn’t mean that you’re not worthy of being contacted. It means that the other person needs to heal. I used to think my ex thought I was a total loser when I tried contacting her. When I didn’t hear back from her, I thought, “She doesn’t think I’m worthy enough, does she?” And I was wrong. She was healing in her own way and on her own time. Eventually, we became good friends and started talking again. I totally understood once she explained it to me. I really learned a lot from her. Her maturity in keeping me at a distance was a great move. If she didn’t do that, I probably wouldn’t have healed as fast as I did. So I thank her for being strong.

So what’s my blabbering point here? I guess it’s just from my past experiences that I wanted to share with you today about break ups and how to handle them. I handled them wrong in the past. I couldn’t let go. But, if you truly love someone, you let them go; you let them be free. If they come back to you then you know it was meant to be. A friendship can develop from there and maybe…just maybe you can reunite as a couple again. You never know.
at January 25, 2007