Trying to See Past the Fog 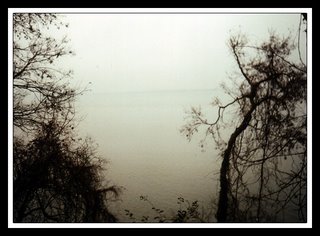 A pile of rubble in the middle of the room. It’s making me claustrophobic and irritable. It’s all my miscellaneous worries, fears and misfortunes stacked up right before me, in the proverbial sense. There’s a ton of cleaning up to do before the holidays. I feel like I’m being tugged in so many directions. Guilt, fear, depression and anxiety have all taken center stage. I prayed to God for something positive to happen. He was able to give me a happy thought for the meantime, just to tide me over. It worked and I went on about my day. Today’s a new day though. I need His help again. The constant imbroglio consisting of family and friends as well as my lover has me in a bit of a quandary.

Bleck! I think it’s the time of year, to tell you the truth. I tapped into the posts that I wrote this time last year. I realized that I was in a gloomy state of mind, and ranting about depressing things. I even displayed a picture of how it looked outside- the same scene that I’m viewing right now. It’s foggy, rainy, dark and gloomy. I went to see my therapist the other day. He said to me that this is the time of year where people are most likely to commit suicide or at least attempt it. November becomes darker during the days much earlier. It’s typically a rainy month.

Sad, rundown, listless, hopeless, weak, fatigued, not caring about things I enjoy, outbursts, rebelling against those I love, and angry are all things I feel right now. (It sounds much like the symptoms of depression on an antidepressant medication commercial.) It’s too much for one person if you think about it. I’ve lost trust in people. I was taught to never trust people; that people would always disappoint you, but God would never. It sounds so pessimistic, doesn’t it? I was never one to be this negative, but I’m feeling it a lot right now. No one’s responsible for my happiness and wellbeing. I know that. I’m the only one that’s responsible, however I’m not doing a very good job at it. Maybe I just don’t care anymore.

A nice gesture as, “What can I do for you” will send me over the edge responding as, “I have no fricken idea what to do for myself!” Sure, I can send advice and suggestions to other people who are feeling down, but why is it that I’m the only one left not knowing what to do about my own depression? I’m lashing out to those who are trying to genuinely help me.

I really need to read the book I wrote and published last year. I mean, I give all this great advice about depression and other topics and yet, I have no idea what to do about ‘me’. Maybe it’s just a phase I’m going through, or maybe it’s just how it is...how it’s going to be forever. I know things could be worse, I realize this, but at the rate of the stagnant pace I’m going, I feel I’m not going to give it much more effort. I may soon give up. Or maybe I’ve given up already. Somebody told me today that I already threw in the towel.