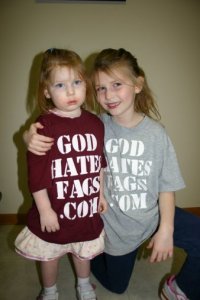 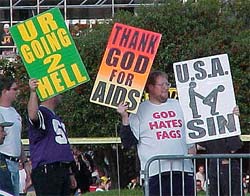 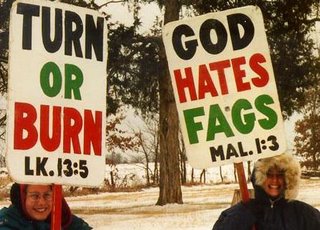 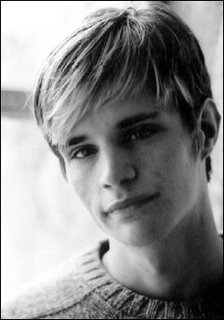 Matthew Shepard beaten to death because he was gay. 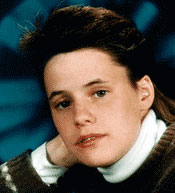 Teena Brandon (or Brandon Teena) was raped and killed due to the intolerance of her lifestyle.

…”Sadly - The only thing Deb and the "Gay Christian" community is doing is 'loving' and 'tolerating' people STRAIGHT to hell.” Dani says.

Isn’t that what Jesus did? He loved and tolerated those who sinned. We’re all sinners- regardless.

“Jesus Anointed by a Sinful Woman”

One of the Pharisees asked Jesus to come to his home for a meal, so Jesus accepted the invitation and sat down to eat. A certain immoral woman heard he was there and brought a beautiful jar filled with expensive perfume. Then she knelt behind him at his feet, weeping. Her tears fell on his feet, and she wiped them off with her hair. Then she kept kissing his feet and putting perfume on them. When the Pharisee who was the host saw what was happening and who the woman was, he said to himself, “This proves that Jesus is no prophet. If God had really sent him, he would know what kind of woman is touching him. She’s a sinner!” Then Jesus spoke up and answered his thoughts. “Simon,” he said to the Pharisee, “I have something to say to you.” “All right. Teacher,” Simon replied, “go ahead.” Then Jesus told him this story: “A man loaned money to two people—five hundred pieces of silver to one and fifty pieces to the other. But neither of them could repay him, so he kindly forgave them both, canceling their debts. Who do you suppose loved him more after that?” Simon answered, “I suppose the one for whom he canceled the larger debt.” “That’s right,” Jesus said. Then he turned to the woman and said to Simon, “Look at this woman kneeling here. When I entered your home, you didn’t offer me water to wash the dust from my feet, but she has washed them with her tears and wiped them with her hair. You didn’t give me a kiss of greeting, but she has kissed my feet again and again from the time I first came in. You neglected the courtesy of olive oil to anoint my head, but she has anointed my feet with rare perfume. I tell you, her sins—and they are many—have been forgiven, so she has shown me much love. But a person who is forgiven little shows only little love. Then Jesus said to the woman, “Your sins are forgiven.” The men at the table said among themselves, “Who does this man think he is, going around forgiving sins?” And Jesus said to the woman, “Your faith has saved you; go in peace.” ~Luke 7:36-50

Fundamentalist Christians scare me. Extremists of any religion scares me, because they’re a potential danger to those who are different. They have absolutely no tolerance for anyone who doesn’t fit their standards of being a “Christian” or whatever religion they stand for. Look at 9/11. Extremist Muslims killed for their God. Look at all the hate crimes committed, such as Teena Brandan. Two men brutally raped and beat her up, because she was a transexual. Matthew Shepard- killed and murdered due to his orientation; due to intolerance for homosexuals. How far does it get when one feels the need to “kill off” homosexuals, or those who are different?

It goes with any “differences”. Whether you’re black, Jewish, Muslim, gay, homosexual or in an interracial relationship, people will find a way to ridicule you and possibly hurt you. Has the world become so insecure with themselves that they feel the need to hurt those who don’t live as they do? Some say that the real meaning of being a homophobic is out of insecurity of being a heterosexual.

In my opinion, hating those who are different from you stems from hating something within yourself.