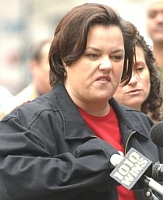 As a gay person myself, I’m totally appalled about what Rosie O’Donnell said to Kelly Ripa. Rosie basically pulled the “homophobe” card out. It all happened when Clay Aiken was co-hosting for Regis on “Live with Regis and Kelly”. He put his hand over Kelly’s mouth because she was talking over him. Kelly got offended, and Clay said, “Oh, now you’re mad at me,” and Kelly responded, “Well I don’t know where that hand of yours has been!”

Rosie thinks it was geared towards Clay being a homosexual, as she made that clear on “The View”. Kelly explained that due to her having kids, Clay shaking hands with everyone of his fans and the fact that it’s flu season had her worried about her hand over her mouth.

She is totally right. Now, as I stand—as a gay person with OCD---I am applauding Kelly for standing up for herself! I cannot stand it when gay celebrities pull out the ‘gay card’, just as though some people of different cultures will pull out the ‘race card’. Kelly would have said it to the most gorgeous straight man, if he were to do the same exact thing that Clay did to her. Rosie thinks Kelly is a homophobe. Come on!

What do you think of all this?