Nun of Our Business 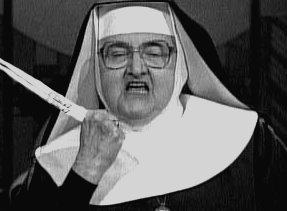 At an early age, I was waking up early on Sunday morning trekking to church with my neighbors who had five other kids around my age. My parents rarely went, nor took me. They were non-practicing Catholics. Most of the time, I found myself asleep. I couldn’t stay up. The entire process of Catholicism had you standing up, sitting down, standing up, sitting down, kneel down, sit down, kneel down, sit. And then, not only did they make the ‘sign of the cross’, but they even did some other little sign language that I wasn’t familiar with—and they synchronized when they did this. It was eerie. The priest would sing a monotone “Our Father” with the rest of the church goers. It sounded scary, much like what you would see going on at a Satan Worshipper’s church. They had that gloomy way about them, and I just couldn’t get into it.

My first experience going to an Assembly of God church for Christians, I was amazed how everyone was so enthusiastic. People came up to you, greeting you with hugs and welcoming you inside their place of worship. The first hour was singing and praising God. The second hour was the pastor giving us a wonderful message from God. I felt God’s presence in that church. They even had different people speaking in tongues, as well as a person to interpret what was just being spoken. It was so much different from what I was typically used to. I liked it.

Backtrack to when I was still in the Catholic Church and attending CCD at night, I always knew that there was some barrier between the nuns and myself. One of them hit me so hard with a ruler on my wrist, only because I raised my hand to ask if I could use the restroom. They were bitter and angry nuns. They all had stone faces, and walked around with an air of importance. Sure, they’re married to the big guy upstairs, but it doesn’t mean to treat people like absolute crap. I’m sure anyone who has went to a Catholic school has a story about a bitter nun. I can only imagine why they’re bitter.

Then news broke out about our priest who molested many young children in his parish. We were all stunned, because we went to this priest for confession. He didn’t like the ‘typical confession booth’ set up. He wanted you to come inside this one room, where there was a cot that looked much like a bed. He patted the mattress a few times, to indicate he wanted you to sit down with him. I felt weird about it, and ran out of there. I don’t know what told me to run—but I did. He had a strange look, and it wasn’t normal to sit next to the priest that I listened to every Sunday...on a bed. I didn’t say anything to my mom, only because she would have thought it was silly of me to think that was strange—or so I thought.

Eventually, the priest retired, and he went to prison for quite some time. The church that he worked at, stuck up for him, trying to convince authorities that this wasn’t true. (They knew it was true, because one nun admitted to witnessing the crime.) These were the people my family and I looked up to. These were the people that were ‘better’ than us, who told us right from wrong. How can this happen? Why did they let a pedophile engage in unwanted sex with a child? The trauma these children went through, even years later was devastating. It affected them in their adult lives as well.

How can this happen? People are weak. People are human, but there is a point where the nuns witnessing this should have said, “This isn’t right,” and went to the authorities. This was a prestigious church that the entire town went to. Nothing bad can happen here. It’ll cause a bad reputation if word got out. It was 'none of our business' so we were told. This is a church that we went to every Sunday! How can this be none of our business? This was a man we listened to for enlightened messages! How can this be...none...of...our...business?

“Well why didn’t the children speak at the time of the abuse?” A lot of people asked.

Children at that age think it’s their fault. They’re also extremely embarrassed by it. They think they’ll get in trouble if they say something so outlandish. A priest did what??? And then the poor kid would get punished for telling a ‘fib’. It’s sad, but that’s how it went down in the town I grew up in. They waited until they were in their mid to late teens. They were questioned on why they waited so long. Eventually, more and more kids came out to tell their story.
at September 28, 2006