- September 13, 2006
This time of year, we seem to be all fragile. We’re vulnerable and scared. We don’t know what’s waiting just around the corner. On edge and insecure, we go about our daily lives. We live in fear, but we choose to not show it. We keep on keeping on... Daily routines of our lives keep us from thinking the worst possible scenario: a terrorist attack. Do we walk around afraid all the time? Or do we keep going about our business as if nothing ever happened? It’s hard, especially living in New York, we all fear the same thing.

Last Saturday evening, I went out with a bunch of friends for dinner in the West Village in NYC. We were sitting outside at this restaurant/café type of place, eating, drinking and enjoying live entertainment. New York was full of life; full of zest and excitement. Everyone was out and about enjoying the last few days of the warm weather. As we sat at our table enjoying our cocktails, we heard loud ‘BOOMS’ from a few blocks away. I looked around, and everyone’s face just dropped. I looked at the people next to us, and their face seemed to have concern written all over it. It wasn’t a normal sound you heard in New York; it was the sound that everyone feared. Again—it blasted away, as though someone was using dynamite.

In the distance, my friend noticed lights flickering; making a halo around one of the buildings that was standing it its way. Apparently, it was a firework display. Although they were fireworks, they sounded much more like explosives. We were relieved to know it was just that—and went on with our dinner.

We were able to laugh again and concentrate on catching up with one another. The music inside was beautiful; streaming out into the streets, and everyone was in good spirits.

After a few Ketel Ones and a few beers thrown back, we tried hailing a cab at midnight. I didn’t know if it was me or if the cabbies didn’t seem to notice my arm extending way out into the middle of the street—but no one was picking us up!

“Taxi! Taxi!” I yelled out, hoping one of them would see me. Nothing. After numerous efforts to catch a ride, I saw a rickshaw. There was a very skinny man cycling down the street with a cart on the end—almost like a buggy without the horse. 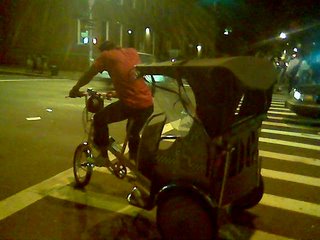 “Hey! Over here!” I yelled out, giggling over the fact that this was so out of my character. He came cycling towards us, and we hopped in the back of the buggy. Can this guy take us on? It’s not like we’re two skinny chicks wearing a size 2 here. He starts to peddle, and I begin to laugh. His struggle to get us ten blocks ahead was a mission to be seen. This guy was weaving in and out of cars, passing by taxis and even hopping on the sidewalk---barreling through people! He was really flying on this thing. With each curb he jumped, our little buggy went for a ride of its life. I was laughing so hard, that I couldn’t breathe! My friend took her camera phone which can record a short video and filmed this: (It's very grainy due to it being on a phone cam.)

Anyway, after ten blocks, the poor skinny man stopped. I was still laughing. It was ten dollars, but I felt that a tip was in order. I gave him twenty. I had to—beads of sweat were pouring out of this guy. He really worked hard to get us from point A to point B. Who needs a fricken gym when you got a job like that? I think I’ll be applying for this career. Not only do you have fun, but you get to make money while you work out. Can’t beat that!

I guess with all the qualities that New York City has to offer, we do seem to put aside our fears and anxieties of the ‘what ifs’ and the concerns of another terrorist attack. If you really think about it, anything can happen anywhere. We still will never forget the dreadful day of 9-11, however we can still enjoy the wonderful treats that Manhattan has to offer. Life’s too short to remain fearful, and New York’s too much fun to let anxiety take over and prevent us from enjoying this awesome city!