Taking the Good With the Bad 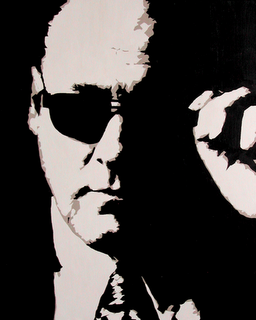 In a blink of an eye, my father can demonstrate a calm, easy going man, or a raging bull full of chaos. It’s tricky trying to talk to him, because you never know what he’s going to agree or disagree with. On top of that, never, ever, and I mean never…talk about politics with this man. He leans so much to the right that it’s scary. After a few gin martinis, he’ll lean to the left for support. His political views are worse than Hitler’s. Now, what I am about to tell you, please take with a grain of salt. My father’s logic and reasoning is neither sane nor meant for educating our children.

Dad. He’s Archie Bunker, Tony Soprano and Leatherface all wrapped up into one. Lovely, right? I just adore him.

Anyway, here’s the lowdown on each of the following alter egos he has:

Archie Bunker: Very racist, but claims he has many Jewish and black friends. He hires the Puerto Ricans all the time at the homeless shelter, so why would anyone think he’s a racist? Those Mexicans are wonderful workers! Then it gets even scarier. His political views on what Bush should do. First of all, he absolutely loves loves loves President Bush. He believes that Bush should go into Iraq and every ‘Muslim’ country that threatens our nation…line them up…and ‘whack em’. Italian for “kill”. No one wants to hear this. It’s crazy.

Tony Soprano: Arrested for racketeering. The FBI raided our home and took away mom and dad. Traumatic for a 16 year old girl? Naw, that’s when alcohol came into play. Dad has placed lovely souvenirs in the driver seat of his enemies. (A dog’s head.) Every Italian restaurant around here knows dad, because they all went to the same “country club” as he did. (Federal prison)

Leatherface: Dad loves telling stories. He’s not shy. Poor Amy got stuck listening to him go on and on about stories that would make any ‘good Christian’ cringe. There was a time where dad got upset over my sister’s boyfriend for saying he would pull the plug if ever, (God forbid) my sister was sick and in a coma for years. This goes back to the Terri Schiavo case. My dad is very protective over us. His choice of words were something like this, “Dat’s ma’ dawta’ ya bastard! Who da’ f*ck you dink’ you’re messin’ wit’ here? I’ll gut ya like a deer! I’ll rip ya’ heart right outa’ ya chest you f*cking slob! I’ll tear ya ear off and cutya’ jugular!” It goes on and on. He won’t stop until you leave. When he gets mad, it turns really ugly—especially threatening any of his daughters. His face gets really red, and his eyes turn yellow. No shit—yellow. He has hazel eyes that gleam a greenish color, but when he gets mad, they turn yellow.

My father and I are a lot alike, except for the racial and political views among other things. I can’t go there with him. Too stressful. We’re the comedians of the family. We’re entertainers and love to have company over the house. My mother? She absolutely hates outsiders walking into her home. My father and I will do this little skit on Thanksgiving or any given festive holiday involving too much family...and way too much alcohol. It’s how “fuggedaboudit” can be used for absolutely anything.

“That guy is a little light on his feet, huh?”
“Fuggedaboudit!!!”

“You think you can handle that excavating job, dad?”
“Fuggedaboudit!!!”

“What happened? Did mom just yell at you?”
“Fuggedaboudit!!!”

“Do you think you’re overcharging these customers?”
“Fuggedaboudit!!!”

Now here’s where this ‘tough guy’ becomes a big mush. One day, as I was cleaning my upstairs apartment, I noticed something strange happening in the backyard. We have residential and commercial property, due to the excavation business. My dad’s able to hold all his bulldozers and backhoes on his lot. He doesn’t have to rent space from anyone. Our property is ‘grandfathered’ for this.

Well, in one section of our yard, are the tractor trailers and the trailers that are left there for storage. Yes, some would call it a white trash scene, but it’s beautiful landscaping on the other side. We try to hide that little area... Anyway, I see my father walking out towards one of the trailers with a huge Italian hero in his hand. I then noticed the trailer door opening by itself, and then I realize that it was a homeless man waiting for his lunch. He was storing homeless people in his empty trailers so they could be warm and have food. My mother would have never, ever let this happen. If it was up to my father, he would store the homeless in his own house. I’m not sure if that sits well with me.

God. My dad believes that God is all love and that God accepts me, and my lifestyle. My father was so overwhelmingly accepting when I came out. We were both watching the gay parade in NYC on television one day, and he looks over and says, “Can ya believe these fairies??? Look at ‘dem, will ya?” I looked over at him and said, “Dad, you had four daughters. Three of them are with men. Don’t you think one of them will stray the other way?” He was silent for a moment, and then looked at me. I was expecting an outburst of lewd and judgmental remarks.

And that was that. His issue on God vs. my lifestyle is amazing to me. He believes that God loves all of His children. I’m grateful that he was so easy to open up to. He has to be the most generous man ever—but a lot of times, he gets burned in the end by friends who use him. My dad and I are huge tippers. We love people, and we love giving…without expectations of a gift in return. He’s a remarkable man with a huge heart…just don’t get on his bad side!