- August 29, 2006
Yesterday was a trying day. As I’ve written before in my previous posts, my current psychiatrist has a personality of a rock. Granted, his words of wisdom that flow out of his mouth only once a year should be cherished, but the fact still remains, he sits there like a zombie and doesn’t say anything at all. If he does, it’s, “So when do you want to reschedule?”

Finally, I found a new doctor. I’m trying him out. Madelene came along with me for the ride. We walked into this small office full of people waiting. I approached the receptionist’s glass window and she gave me a ton of papers to fill out. You can’t help but hear everything that goes on in that office—it’s that small.

“No! We fit you in for 4pm this afternoon! Other than that, if you want to cancel this appointment, it won’t be until October…..No! I can’t!......What?......I’m sorry, you’ll just have to do the best you can!.....Well I’m so sorry to hear that.” The receptionist screams into her phone as she covers up the mouthpiece, looking in my direction as if she was going to say something. She whispers to me, “I’m sorry if I sound rude, but this patient cancels 90% of her appointments, please forgive me.”

Why is she apologizing to me? And why do I have to know about this woman’s appointment problems?

Then I see him. The doc. He comes out, and says, “I have your charts—I’ll be back momentarily!” He seemed as though he was a very high-energy kind of guy, short, stocky, a bit overweight and Jewish. The beanie gave it away, along with his full grown in beard. I believe he was orthodox---he didn’t have any curls or thick coke bottle glasses. I didn’t care; I just wanted a good psychiatrist.

Then the door opens from behind me. “Hi,” the doc says, trying to surprise me from another entryway. I wasn’t amused. Just get me into the office and help me please!!!

The office was beautiful actually. He sat me down on this huge couch that literally sunk my ass down to the floor. It was too comfortable. I knew I was going to have trouble getting out of this sofa.

“You don’t even know what we go through around here. Our patients are constantly calling in and canceling, which is why we’re having a problem with this one girl. We used to be upstate for a while, and recently moved down here. And now she can’t get a ride, or she’ll take a bus here, but says she doesn’t have money to take a bus…yet she has money to pay for the five medications I prescribe to her.” Doc says, with excitement in his voice, as his beanie flies across his desk. He gracefully picks his beanie back up and places it back on his bald spot.

“So why are you here today, Deb?” As he’s looking at my charts that explain my very reasoning.
“Anxiety and panic attacks plus depression episodes.”
“How long have you had this?”
“Since I was sixteen years old.”
“Repeat after me…Red banana…75 Washington Street…and freedom.”
“Red banana, 75 Washington Street, and freedom.”
“Good. I’ll ask you to repeat those again at a later time.”
“What does this mean…People in glass houses shouldn’t throw stones?”
“References to hypocrites.”
“Say the months of the year backwards.”

Okay, so now I feel as though I’m doing some sort of sick sobriety test. I knew it was some sort of IQ test. I’ve been told by one psychiatrist before that my IQ was too high to have any sort of mental problem. To me, I think people with mental disorders have more of a intellectual outlook on the world. There’s a fine line between insanity and intelligence.

Long story short…or short story long….I explained to Doc that my anxiety attacks has lessened throughout the course of the years, however my bouts of depression seems to last bit longer. I still have a touch of agoraphobia, but I’m pretty sure I can zap that one, since I’m able to go into a grocery store without passing out.

Doc kept writing…and writing…and writing…and writing. Then his cell phone rings with a strange song. It was his physician’s office. He was scheduling a cholesterol and blood pressure test. He went on and on about how his wife kept nagging him to get this done. His friend recently had a stroke and he doesn’t want to be part of the statistics, as he kept munching on his Frito Lays. Then the woman he was talking with on the phone made an appointment with him. It was a business trade off that lasted a whole twenty minutes.

What is with these doctors taking calls on my time??? I am happy to report that after his phone call, he apologized and said he would give me twenty minutes extra. That was nice—but what if I had somewhere to go after that? Unreal.

Then he went into his life story about his wife worrying about his health and how the Goldberg family tree was dwindling off due to bad food and overeating. Why do I need to hear this? I’m a very compassionate person when someone is talking to me about their health--but for the love of God this is my time! I’m paying YOU to tell me about your health problems? I’ll send him the bill in the mail.

“Well, it sounds to be that you have bouts of depression with some highs to go with it. This is called bi-polar II. What that means is, you don’t experience abnormal highs, but your lows last longer than usual. I’m prescribing Lamictal to you.” He says, as he’s already writing out the script. His beanie fell once again, and he gracefully picked it up, placed it back on his bald spot as if nothing happened.
“Isn't that an anti-seizure medication, Doc?”
“It can be used for that…This medication will stabilize your moods and reduce the amount of highs and lows you are experiencing. Now, the one thing I must tell you, is that you may get Steven Johnson’s Syndrome from this.”
“Steven Johnson’s Syndrome?” I asked.
“Yes, it’s a syndrome that occurs with this medication. It starts off as a rash, then goes into lesions, which can eventually turn into blisters in your mouth that go straight back into your throat. This syndrome can be very fatal if not treated immediately. Get medical attention right away if you experience this.”

Deb’s anxiety goes way up! I can’t believe this guy was giving me some weird ass medication that’s going to make my skin look as though it’s inside-out. He then reached over in his closet and took out a huge case of this medication to give to me.

“Please start off slowly with this. It’s very important you don’t go right into the recommended dosage. If you do, you will get this syndrome. Now can you repeat the three things I said to you before please?” He says, as his beanie fell right into my lap.
"Red banana, 75 Washington Street and freedom."
"Very good. See you next month."

I didn’t want to reject his script right there. I wanted to walk out and think about this suicide pill before making any decisions.

I explained to Madelene what these new pills may do to me. She was shocked and told me her friend almost died from this! Why is this doctor giving me a medication that will make me have anxiety? Why would any doctor risk the chance of their patients getting this syndrome? I’d rather live with my mental disorders and anxiety, rather than take something that’ll literally kill me. Look at these photos below. I know these photos may be alarming, but think if you had to take this medication. 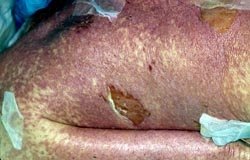 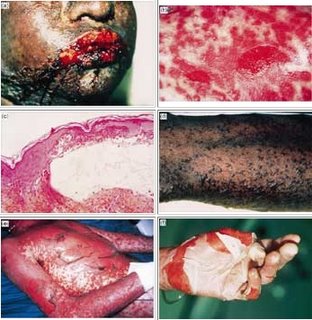 I seriously think there are no ‘good’ doctors out there. The more I go to these doctors, the more normal I feel. From a psychiatrist that doesn’t say one word in our session, to a hyperactive Jewish man who has diarrhea of the mouth with a bouncy beanie. I don’t know which one is worse!


This is going to be me in a psyche ward soon...rocking back and forth humming like a mental patient, cutting out little paper people. Don't let me get this far guys! Help me! I need a good doc!