The Raging Sea and PMS 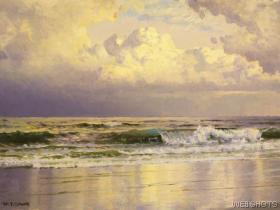 Don’t do it. Don’t say it. Don’t think it. Don’t touch me. Don’t keep asking me the same questions over and over again. Just don’t. What? What? I can’t hear you!!! Are you speaking another language, because you’re not making sense!? The words out of your mouth mean absolutely nothing to me. Nothing. Stop making all that noise! I can’t take it! What are you talking about again?

From the slightest crinkle of a candy wrapper to a question that goes beyond what you’re willing to answer—your mind is in complete disarray of any rational thinking that may have taken place just a week prior. Your brain is ‘fuzz’. It’s static electricity sending out electric vibes; striking innocent people in its path. Don’t go near it. Stay far, far away. It’s a force to be reckoned with.

Inside the life of a PMS victim (I’m speaking of the person PMSing) life can take a very strange turn. From being happy, going out having fun and spending time with loved ones and friends, to staying home watching sappy Lifetime movies drinking a huge cup of tea with a box of Kleenex by your side in case you start bawling like a big baby. Hormones are dangerous. They alter a woman’s mind. This can also turn for the better. Hormones during this time may have their partners ‘satisfied’---due to the levels of testosterone flowing higher one moment. Cherish that moment. It’ll be over before you know it.

People get the initials “PMS” all confused with the concept of menstruating. They’re totally different. PMS is ‘pre-menstrual syndrome'. This usually occurs during the week before a woman starts her period. They’re like a time bomb waiting to explode. Their system is filling up with not only blood, but with raging out of control hormones and feelings of rage, anger, sadness and resentment. This all leaves once the woman is ‘relieved’ of her tension.

Please be warned of the following foods if you take a woman out who’s PMSing:

1. Chips
2. Tortillas
3. Sushi (with soy sauce)
4. Bloody marys
5. Soup (of any kind due to the amount of sodium)
6. Olives (do not order her a martini)
7. Anchovies (this includes antipastos and pizza)
8. Hot dogs
9. Salamis
10. Smoked salmon/lox (cured with salt and sugar)

Salt (sodium) bloats the woman up, making her feel tense and irritable. She even may have an overwhelming desire to drink tons of water—to which brings more bloating due to the water retention that the salt contributes to.

Here are some good ideas to feed your PMSing woman if she wants to go out:

1. Steak/burgers or anything with red meat (iron)
2. White wine (people actually think red wine is better due to it’s color, but white wine is better because it has more iron levels in it—red wine is just ‘sweeter’.)
3. Chocolate (this lets the woman feel better due to lack of blood)
4. Clams/mussels (loaded with iron)
5. Liver (tons of iron)
6. Spinach
7. Chicken
8. Fish
9. Brussel sprouts
10. Coffee/tea (caffeine is a known pain reliever)

These are all foods and beverages which have helped me feel better, as well being researched. My girlfriend went through a lot of problems due to having fibroids on her uterus which has to be removed eventually. She went through a rough time with excessive bleeding and had to get a D&C—(dilation and curettage) which left her weak. Her blood level was so low; it was almost close to having sickle cell anemia. Through research and doctor’s advice, I had to feed her all of the things above in the second list. I never thought clams were loaded with iron.

On May of 2005, we went to our beach house in the Hamptons, and we were worried because she was expecting her period during that time. The doctor said that if it got ‘alarming’ (hemorrhaging-type) to seek immediate medical help. We were on edge as soon as she got her period.

I made delicious chicken livers sautéed in onions, a baked potato along with a spinach salad. We made short work of the wine, which she had to drink in moderation, due to the alcohol thinning out her blood. I picked up some clam chowder from the local fish market down at the bay, and bought some chopped meat for the next night to barbeque.

I watched her like a hawk, and she seemed to be fine. The amount of iron I was pumping into her system made her stronger. It wasn’t ‘alarming’—thank God. We sat and relaxed on our deck which overlooked the ocean. I think the mixture between the calmness of being on the ocean and the rich in iron foods helped her a great deal. In fact, it was one of the best vacations we ever had. We relaxed, sat by the fire while there was a huge storm outside. Gale force winds and high tides were tumbling down on the beach, making our house rumble with each crash of a wave.

In the morning, I let her sleep in, while I made some coffee and sat outside on the deck watching the beautiful surf. The waves were practically reaching under our deck. In the bedroom, you can hear every little crash that the waves made. Our sleep was so restful, and our days were relaxing and stress-free.

At night I gave her excitement. We were drinking wine, and we had a huge fire going in the living room. I went to stoke the fire a little, but instead of grabbing the stoker, I grabbed the dry, straw broom. I almost burned the house down.

One evening while it was midnight, we took our wine and went down to the beach to sit and watch the ocean while the moon was full and bright. I got so drunk, I ran out into the ocean with my jeans on splashing around. If anyone knows me---they certainly know that I don’t even approach the beach at all. I FEAR the beach—even though I’m a good swimmer in a pool. Many stories about sharks reaching the shore and people getting sucked away by the riptides have me sitting on the dunes! That night, I had no fear. Madelene was laughing, but she kept an eye on me. That poor girl and the stuff she has to put up with!

The one major difference between Madelene’s cycle and my own, is that she doesn’t get the PMS rages. She never really seems depressed—the only thing that gets to her is the fatigue. Either she hides it well, or she’s just a unique woman. We balance each other out thankfully, and she puts up with my wacky hormonal imbalances.

We’re both very helpful to one another when we go through this. People laugh and joke about PMS, but let me tell you—it’s more serious than one may think. If you never experienced the extremes of PMS and the problems of what women have to endure while menstruating, it’s quite alarming sometimes. From hormonal wackiness to medical problems that need attention. For me, I get severe cramping that sometimes have me curled up in a corner somwhere crying hysterically. The pain is usually treated with 800 mg of Motrin, however, at this point it sometimes doesn't work. I may have to take other measures and talk to my doctor.

The complexities of a woman are fascinating to me. I wouldn’t have it any other way. I think that’s what compels me to women in general. They’re much like the ocean. Their waves change overnight, from high tides to low tides. They’re unpredictable, which keeps me on my toes. I just hope one day I don’t encounter a tsunami.