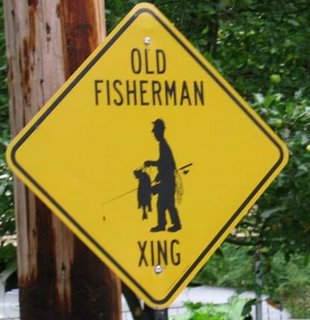 These things really happen to me. I’m not even exaggerating. Once again, Amy and I are out to dinner enjoying a bottle of wine along with some delicious Italian food. We were seated next to the window that overlooks the lake and a very busy street. There was a nice older Jewish couple behind us talking up a storm. They looked as though they were in their mid-fifties and seemed as though they’ve been married for a very long time. I tend to eavesdrop on other people’s conversations sometimes when silence hits my own table, but I’m not as bad as my mother. Her antennas go up right away, even if you’re telling her the most exciting story—someone at the other table has a better one to tell.

As I overhear the couple talking about their grandchildren’s bar mitzvahs and such, I notice outside that a car stopped right in the middle of the street without putting their hazard lights on. Cars were passing, beeping like crazy and going around him from the left, as well as the right side of the vehicle. Then, an old man walks out, with white hair, a long white beard that looked like he was some old fisherman out from the cape. This man looked like some captain of a ship. He staggered inside the restaurant, possibly for some help.

“Can anyone tell me where 54 E 21rst St is?” He yells out, across the bar of the restaurant. The location he was searching for was the road he was on. We knew this guy was either drunk off his kilter, or just senile.
“Sir, you’re on that street. Just keep going down the road and 54 should be on the end.” The bartender explained, as she was shocked that this old man didn’t realize he was on his own street.
“Well do ya’ have a cigarette? I really need a cigarette!”
“No sir, I’m sorry, I don’t.”

The old man continues to walk towards the door, but realizes there are people dining inside the next room. He decides to trek inside. The lady behind me leans her chair back and whispers to me, “Do you think he lost his way inside the restaurant?” I leaned back more and said, “I think he’s really drunk…I can’t figure this one out.” We both start chuckling because it was just so awkward.

On the top of this elderly man’s lungs, he screams out to the rest of us, “Do any ovya’ have a cigarette? I really need a cigarette bad!” Everyone turns around and nods ‘no’ to the old man. “Well, that’s good! You don’t smoke. That means y’all very healthy! Enjoy your night!” He says, as he staggers back outside into the chaos of cars backed up behind his old clunker. Moments later, a patrol comes by, and leads him back to where he was going. I guess he wasn’t drunk—he was just disoriented. I kind of felt bad for this guy.

After one Frangelico for me, and a coffee for Amy, we decided that it was time to leave. It was 10pm, and the evening was absolutely beautiful. We went back to my house, and sat near the pool where the moon reflected brightly against the water. As we were talking and laughing about the night’s events, we hear a growl from beyond.

“What’s that?” I ask, looking around my yard for any bears. We’ve been known to have bears around this area.
“Sounds like a car or an old truck, Deb.” Amy says, as the growl became more animalistic.
“No. That’s a bear!” I said, recognizing the rumble of the beast’s angry territorial warning sound. Then I heard loud barking from behind my gate. I couldn’t see too well, but it looked like my neighbor’s Rottweiler. For some reason, I had my keys and cell phone on me. I never do this when I’m home just hanging out in my yard. Luckily, I had them. I went to go exit on the opposite side of where the dog was snarling and barking at us, but he decided to run fast over to where I was going to exit. Amy runs over to the corner of the pool and grabs a huge shovel. Why the hell did we have a shovel there in the first place? Thank you God!

I start dialing my parents’ number. No service. What the??? I try again… No service. This has to be just my luck tonight! Then, finally I get through, and my father. (known to have ceased many dogs in his day if you rummage through my archives) He comes out with a huge metal pick. I have no idea what he uses this God awful thing for…but chances are, I don’t want to know.

“Get ata’ here ya rat bastard! I’ll keel ya --- ya sunnova’ bitch! God damn dogs!” My father screams out, as he’s waving this awful looking metal pick around like a crazy man.

As the dog approaches the gate and gets closer to the flood lights, I notice that it was a black lab puppy. This is what I was afraid of? He was a hyper little thing. I told my father it wasn’t a big deal, I just thought it was the Rottweiler from next door, because it was dark out, and he appeared larger for some reason.

I opened the gate, and the dog rushes in jumping on me. I played with him a little, and then he nipped my hand. He was aggressive, but only playing. I ran inside and sat on my deck upstairs with Amy to watch this dog roam aimlessly through my yard.

And people wonder why I have a drinking problem… 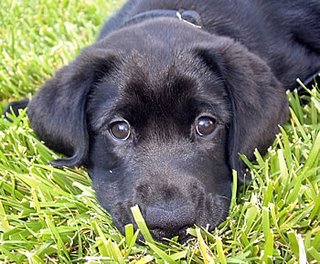 BEWARE OF THIS VICIOUS DOG! Chances are you'll get licked to death...