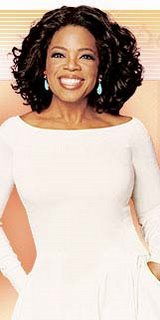 When you’re in the spotlight like Oprah Winfrey, it’s hard to get away from paparazzi who will publish absolutely anything and everything they can get their hands on. It’s a huge business for the tabloids to receive incoming news of someone ‘coming out of the closet’ or some big star having a hot steamy affair. It not only hit tabloids and other ‘entertaining smut magazines’, but it has also trickled into the news.
They first speculated Oprah was gay just because she made an appearance on The Ellen DeGeneres Show. Come on, is that ridiculous or what? Many celebrities have appeared on Ellen, but it doesn’t mean that they are homosexuals.

“Since my appearance on the Ellen show, there have been rumors circulating that I'm gay. I've addressed this on my show, but the rumor mill still churns...The latest development in the rumor saga is that I'm supposed to be doing a coming-out interview with a major news magazine. I'm not." ~Oprah

Rumor has it that Oprah’s lover is her dear friend of thirty years. They’re like sisters. They’re together a lot, so they pinned Oprah's old friend to be ‘the lover’. Even if Oprah was gay, in my personal opinion, I feel she should just leave that to anyone’s imagination. Let them run wild with the rumors and have fun with it.

Sometimes, when a well known celebrity comes out of the closet, they lose a lot of their fans for many reasons. Some may have radical Christian views, others feel that they’ve been lied to, and some are homophobic and can’t fathom such a thought as their ‘idol’ being gay.

When Ellen first came out of the closet, not only did she lose many fans, but she even lost her show on NBC. It was sad to see her go, but her role on the television show she appeared in was a ‘straight woman’. Now, you may disagree with me, but she came out at the wrong time. People were relating to her, and there are many people who treat television as ‘their real world’.

If someone is an aspiring actor or actress, be yourself, and act whatever role you’d like. Just don’t expect to play the straight guy and walk out of the closet years later with a big surprise for everybody. The entire world isn’t going to agree with you. Remain quiet if the secret of being gay has been silent for this long.

Ladies: Would you lose respect for Brad Pitt or Colin Ferrell if they decided to come out with the big news that they’re gay?

Guys: Would you lose respect for Angelina Jolie or Charlize Theron if they came out as lesbians? (I know I would be thrilled to know if Charlize was gay! Although it may mean I have a snowball's chance in hell getting her to go out with me...)