- November 17, 2005
Yes, it does mean what it appears to be, but more so in a diagnostic way. Seasonal Affective Disorder (SAD) is a form of extreme mood cycles that usually strikes most people in the winter season. The day is shorter, leaving us with little time for sunlight—which is essential for our source of vitamin D. Ultra-violet rays gives us that vitamin D to give us that ‘happy feeling’… I usually hide out in my gym this time of year, and use their tanning beds. That helps a great deal---it’s the same as being out in the sun for fifteen minutes. People actually go out and purchase one of those florescent lights especially made for that purpose. People will sit in front of it to feel its affects. 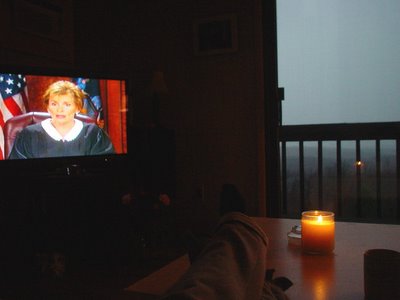 I felt the affects of SAD yesterday. So not only do I have OCD, ADD, & PMS, I now have SAD… Anyway, it was such a dreary day. The rain was nonstop, and the atmosphere was gloomy. I couldn’t focus on my work, and ended the day at 3pm. I grabbed a nice cup of green tea, jumped into a pair of oversized sweatpants and sat down on my couch, watching Judge Judy. I needed someone else to vent for me, and she was the one to do it. Just look at her face---it’s enough to just plead guilty- even if you didn’t do it. These poor souls get the wrath of Judy as she crushes their souls deep into the ground.

In a strange way, this makes me feel better about my life. Her anger is what makes me think, “I’m okay…I’m not that mad.” I’ll even flip over to COPS for a sick source of entertainment…Just looking at all these poor souls getting busted in their dilapidated housings, wearing nothing but boxers and a dream—it’s enough to make you either feel very sorry for them, or feel very sad about how the world is ending up. Everyone is on crystal meth these days. Crack is out—crystal meth is in. What ever happened to good ol’ pot? Not that I’m a fan of drugs, but is it me—or are people getting more and more hooked on bigger and better stuff? This stuff doesn’t even relax you—it’s supposed to not make you sleep for days! Who would want this? Just spend the night at Starbuck’s under their taps.

Another frightening drug is heroin. The thought of putting a needle to my arm scares me half to death. I had a close friend of mine that had a problem with heroin. Her weight dropped all the way down to eighty-five pounds, and her face was all withdrawn. Seeing her made my heart break. She’s a good person, with a huge heart, who also had a huge addiction. She had to go on methadone to wean off. Once she was clean, she decided that she no longer could live here, in New York, because she knew way too many contacts. Her dealer lived right in the Bronx, and she needed to break loose from this vicious cycle, or she would die. She now lives in Florida with her girlfriend of eleven years, and has not been using. Her drug of choice these days are coffee, cigarettes and alcohol. At least it’s ‘legal’ and less harmful.
Right now, I just hope my friend is doing okay over in Florida, as she says she is… She’s also of Christian faith, and has inspired me many times.

“We can rejoice, too, when we run into problems and trials, for we know that they are good for us—they help us learn to endure. And endurance develops strength of character in us, and character strengthens our confident expectation of salvation.” ~Romans 5:3-4

Do we all have our little addictions? Whether it be drugs, alcohol, food, the internet and unhealthy relationships—to even sexual addictions? (Hmm… Some of you—don’t answer that last one!) It is true though---sex can be an addiction. I’m talking about the reckless kind; the type where it’s with strangers to get that thrill they seek. It’s a thrill seeker. Even with unhealthy relationships---the addiction---or the ‘drug’ if you will, is ‘thrill’… if the ‘thrill’ is gone, then there’s no more fun. They need more, or move on to the next drug, and/or victim.

I must admit, my addiction is alcohol. No, I’m not that stumbling drunk you find in the bushes knocked out cold in your backyard…(well sometimes) I’m the type that no one would suspect. I’m the girl that can drink five to seven glasses of wine, still be standing, still be talking coherently, and yet I am absolutely ossified. I’m the undetectable one. I can walk into a pub, drink eight to ten pints of black and tan beer, and still be walking, after my friends have three, and stumble all over themselves.

They stereotype alcoholics as “clumsy and disoriented”…We come in all forms...What about those who have their wits about them; their tolerance has built up to an all time high? They’re not considered, ‘alcoholics’? Many of my posts have stories of waking up to a delicious bloody mary to cure a hangover...HELLO???

No, I decided not to go to AA…I refuse to sit on cold steel chairs drinking coffee out of Styrofoam cups eating baked goods and listening to stories of drunken pasts. I’ll be sober alright, but I’ll be one fat chick!

You all remember when I told you about the diet race Madelene and I are on, right? Well, *hehe* I’m winning!!! Apparently, our diets aren’t bad…not at all. We eat veggies, lean meats, and everything that you should eat on a diet. Why were we gaining weight? Alcohol. I have been sober for two whole weeks, and I have lost a total of five pounds. Okay, five pounds isn’t an awful lot, but it’s still enough to keep me motivated. Keep in mind, I haven’t been exercising due to my back, and I haven’t been doing anything different, other than not drinking, and slightly cutting back on portions—which I wasn’t a huge eater anyway to begin with.

So how can alcohol be fattening?

#1. I weighed in at night. Worst time to even attempt such a thing.

#2. Lots of beer will drain you out. The next morning, of course you’ll be lighter, but watch weeks to come---you’ll bulk up.

So this raises the question of, “How come some people can drink drink and drink, and not gain a single pound?”

Everyone’s different. Everyone’s metabolism and body breaks down food and sugars differently. For me, my body cannot tolerate sugars. I would hear, “I can’t believe it-- she hardly eats a thing, she works out two hours per day, and she is not skinny!” It baffled me too. I couldn’t understand why I was on a plateau and couldn’t get off it. I maintained the same weight- didn’t lose, didn’t gain---until I stopped working out due to my back. I’m happy to say that I am back into my old jeans. Keep your fingers crossed and say a prayer that I continue this new healthy lifestyle. Any tips or advice is appreciated. I just need to know how you can go out and have fun, without the alcohol involved.