Competing With a Man

- November 07, 2005
“You’re such a cocky little bastard! I can’t believe you think you can get any girl!”
“It’s true, Deb. Women never say no…they just don’t.” Derrick says, as he chugs the last of his beer down.
“Derrick, you’re a good looking guy, but to have a mindset where no woman would ever turn you down just sickens me you freak.”
“You’re just jealous because you have a disability—you’re a lesbian.”
“No sweetie…That’s my advantage. Remember, a woman knows what a woman wants.” I said, secretly getting fumed under my skin with his snide remarks.
“I guess we will have to just test this out.” He suggested.
“Don’t come crying to me when I have the girl you want, in my arms.”
“Uhhh-huhh…” I rolled my eyes at his conceited attitude.

I start putting on my jacket and grabbed my keys. Derrick always came over every Friday night to hang out for a beer or two, and then we would head off to the club nearby. We were best friends, but we had this competitive nature about our friendship. It was sometimes fun, and other times—just fricken annoying as hell. He was a very good looking guy. In fact, he looks much like Romey! (Sorry Romey, had to add you again in yet another post…)

We walked in the club and headed straight for the bar to get our meds. We scoped out the scene and we were ready for our little game. I was prepared to win—only because I wanted him to be defeated. I would go to any lengths to do this…even if it meant ‘cheating’. Unfortunately, there was not one person I knew at this club that I could convince to play this stupid and immature game. Madelene and I were dating, but ‘casually’ at that time. I was twenty years old, and Madelene had just turned thirty. I can’t believe all the crap she put up with back then. Hell, I can’t believe all the crap she puts up with now! She met us at the club along with her other friends. I told her about this ‘game’ and she was laughing.

“Oh yeah…incoming baby!” Derrick zooms in on his victim. An amazing looking blonde chick with a sculpted body. I actually had my eye on this girl for quite some time. I always checked her out when I was at this club. She never gave me an inkling that she may be bi-sexual or a lesbian at all. Her hair was straight, light blonde, and a little passed her shoulders. Her eyes were crystal blue; you can almost see your reflection in them. Her face was soft, and her lips were full, soft looking, and just too damn tempting.

“Oh yeah, you’re losing, Deb—big time! She’s walking over to the master…”
“Okay…let’s see this.” I said, as I sipped my beer nervously, watching her walk over towards us slowly.
“Don’t wait up for me…heh.” Derrick says, in this cocky little voice.
“Yeh—whatever.” I reply…almost envious over his testosterone. She must have been picking up his pheromones. Fricken men!

Derrick and I just stood there still; waiting for the lucky winner to be chosen. Derrick was to the left of me. She walks right over to us, and passes Derrick.
“Hi, I’m Sarah.” She reaches out for MY hand. Without saying one word back to her—she pulls me close to her and says, “Dance with me.”
I quickly look at Derrick with eyes that said, “SUCKER!!!” I was so happy! Was this set up? I don’t get it! How can I be at a straight club, and a straight girl wants to dance with me, instead of my gorgeous friend Derrick? This was so unheard of, and so bazaar—I loved it!

There we were, on the dance floor. Her body intertwining with mine, moving with mine, as if we were one. Men circled around the dance floor to see what was going on. This club never had ‘that kind of scene’. Was she doing it just for the attention? Did she already know I was a lesbian? What gives? This is too good to be true! I was so shocked. Each time we moved, I glanced over at Derrick as he was nervously chugging away at his beer. He was peering at me with jealous eyes. Oh the sweet revenge! I was in heaven.

“Come with me.” Sarah says, as she pulls both my hands and directs me off the dance floor.
“Let’s go in the bathroom.” She suggests. 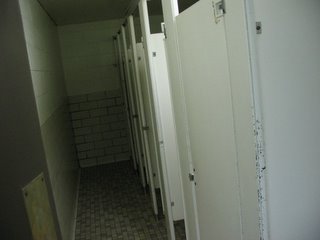 We pass Derrick, and I gave him an evil smirk.
“Oh Derrick, don’t wait up for me, we’re going to be in the bathroom…”
He shook his head and just walked over to the bar. I didn’t know why she wanted to go in the bathroom, it was usually packed full of hens primping and stuffing their bras with God knows what. There were only five stalls, and about thirty women waiting on line. It was always like that.

“Let’s go.” She says, as one of the stalls opened up.
“Oh, no, that’s okay, I’ll wait for you.” I suggested…now being a little chicken.
“Nooooo, come in with meeeeeee.” She says, in this whiney sexy voice.

She pulled me in and shut the door behind her. She tried kissing me—but I didn’t want to. I was under attack! This was only to take my friend down a notch or two. I really didn’t want to go through with this. I never wanted ‘just sex’ with a woman, especially while other women were doing the ‘pee dance’ outside on line waiting. Women can get very upset if you’re in there two long—especially if they know something else is going on.

Guys---don’t be disappointed, but I dodged every kiss she threw at me. She then decided that she really needed to go to the bathroom.

“Don’t open that door!” She shouted, as she realized that I wanted to get out.
“Stay! I just have to pee!”
“Okay….” I said, as I turned myself around so I didn’t have to watch. What was wrong with me back then? Who knows…

Then I heard words that were so out of the ordinary…

I slammed the stall door so hard against the wall while flying out of there, that I nearly crushed two women near the vanity. I got the hell out of there, as if I were on fire. I ran so fast, my curly hair turned straight! I ran out, over to the bar where Derrick was. He was on his fourth shot, and ready to go out on a ledge somewhere at this point. 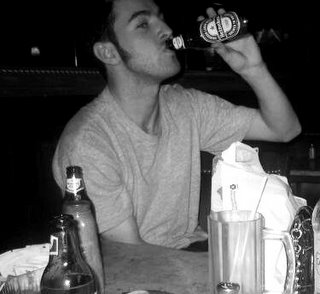 I walked away. I didn’t know whether to laugh or cry. I ran to Madelene. I told her the story and she was half laughing, but shocked and appalled by it all. I then see Madelene heading over to the bathroom, right when Sarah was walking out.

"Don’t you ever go near Debbie again! If I ever see you even near her---ughhh!” She couldn’t even get the rest of the words out, because Madelene isn’t a violent person. Madelene walked back over to me, and Sarah went back to where her friends were at the table.

“You okay?” I asked Madelene.
“Yeah, I just hate when women think they can get whatever, whenever they want…especially when it’s you.” Madelene started chugging her beer nervously, like the rest of us were all doing all night.