Josh Duggar's Public Apology to All Gays and Lesbians 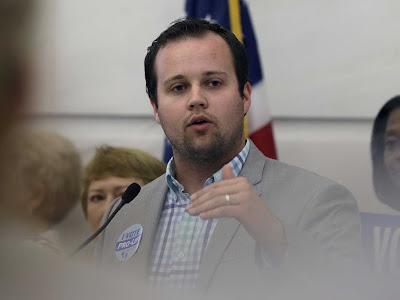 When someone apologizes once they've done something wrong, is it more sincere if they say it after they've been caught or if they sat you down and told you what happened before you found out? Or does it even matter? Apparently, Josh Duggar apologized over on their website and admitted he was being a hypocrite after he was caught on Ashley Madison. I love the edited version of Gawker's apology from Josh. Priceless. 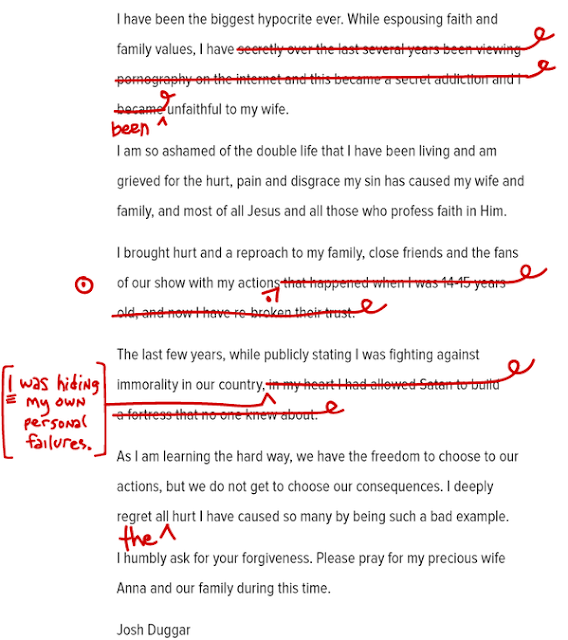 Forgiveness is a wonderful thing and maybe his wife will after some time, but I keep thinking about the differences between an "oops" and an intentional hunt for an extramarital affair. When you're 'out there' on websites looking for an intentional sexual encounter, that's much different than say if he met some girl at work and they had some sort of romantic encounter and then regretted it. None are OKAY, but one is a bit more forgivable. Hey, we're all human, right? Would this be considered more of a sexual addiction rather than a "mistake"? 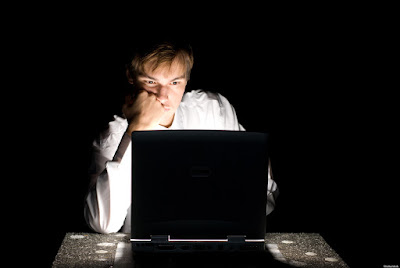 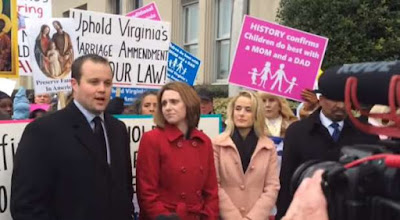 Will Josh Duggar continue to condemn gays and lesbians now? I want to touch upon this subject once again to let my LGBT community know that just because you love someone of the same gender does not mean that it's a sin. The twisted verses that most right winged religious people will rattle off about are meant to control society -- a more "moral" (ha) society. 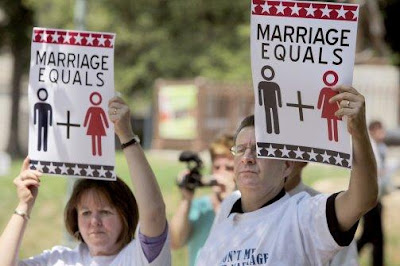 There is of course the hypocritical portion of this side show circus that just boils me over. And it's not just Josh Duggar -- it's many conservative right-winged religious nuts who love to condemn those who are gay and lesbian. I was really taken aback when all of these Christian conservatives were sticking up for Josh saying that we should forgive him after hearing about how he molested his sisters. Yes, we should forgive him, but we should also look at his judgments towards other people who he considers "sinners". And now that his sin was brought to the top of the Ten Commandments of adultery, I wonder if he'll be a bit more lenient to those who are in the LGBT community.

I bet you any amount of money that Josh is going to still comment about gays and lesbians with something like, "Well, I repented for my sin as an adulterer, so I am forgiven, but you're still sinning!" First of all, being gay is not a sin. What they are referencing to is the promiscuous nature (as Josh is so familiar with) that leads people to believe that all homosexuals are going to hell. In Romans they spoke about the random promiscuity that ran rampant and how men got bored of women and women got bored with men so they went with the same sex. They were having orgies and going with anybody. They weren't "gay" -- they were promiscuous. 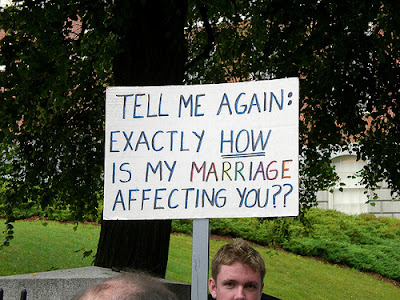 The story of Sodom and Gomorrah (which they all seem to reference to) is about rape -- not homosexuality. In the Bible, God says that He's going to destroy cities of Sodom and Gomorrah, if two angels cannot find any good people within the towns. Once the angels arrive, a kind man named Lot invites these angels into his home and entertains them. This angers the cities' men, and the men rallied outside of Lot's home, wishing to do "perverse actions" to these male angels. Moments later, the two cities are destroyed by fiery rain. Many anti-gay Christian ministers use this passage to say that this is an example of God’s wrath against homosexuality -- as if the men of Sodom were all gay, and all trying to "be gay with" these male angels. Historians and sociologists tell us that gang rape was a very common form of brutal humiliation of the subjects, in the ancient Western world. The Sodomite men did not come to Lot’s house to have monogamous, committed, loving relationships with the male angels residing there. They came to rape these angels. Also, MULTIPLE parts of the Bible (Luke 10: 10-13; Isaiah 19: 13-14; Jeremiah 23: 14; Ezekiel 16: 49; Zephaniah 2: 8-11) tell us that God despised the greed and their wickedness toward outsiders as their sin, not that fact that men wanted to “have sex” with men.

Homosexuality was listed as an “abomination” in Leviticus which is the Old Testament. Christians/Catholics no longer go by the old law. If you go by the Old Law, then stop eating shrimp scampi or lobster. This poor dog's going to hell.

You know what’s also a sin? Not shaving your beard, sitting next to a woman who is menstruating or getting a tattoo. In the trinity-based religions, Jesus died on the cross to abolish the law and save us from sin. No one will ever be saved by “obeying the law” — as it says in the scriptures.

Read that last sentence again: "For no one will ever be saved by obeying the law.

In Corinthians it has a mixed interpretation. Interpretation is key. Just as it says in the first Corinthians about sexual immorality: “Don’t you know that those who do wrong will have no share in the Kingdom of God? Don’t fool yourselves. Those who indulge in sexual sin, who are idol worshippers, adulterers, male prostitutes, homosexuals, thieves, greedy people, drunkards, abusers, and swindlers—none of these will have a share in the Kingdom of God” ~1 Corinthians 6:9-10

Some Christians will fire this off to the gay and lesbian community as a warning that they’re not getting into heaven. But, they fail to read off the next verse: “There was a time when some of you were just like that, but now your sins have been washed away, and you have been set apart for God. You have been made right with God because of what the Lord Jesus Christ and the Spirit of our God have done for you.” ~1 Corinthians 6-11

Ok, enough religious blabber for one day. But you catch my drift. There are so many sins in this world and yet the biggest sinner (the one with the most skeletons in their closet) are usually the ones who point out everyone else's flaws or thought-to-be flaws. I believe it falls under "psychological projection", when somebody is guilty of a particular "sin" and points their finger at someone else for doing the exact same (secretive) thing they do. There is something definitely psychologically demented about that type of thinking and behavior. It's just like when someone doesn't feel good about themselves and thinks they're less than attractive -- most likely, they will put down and insult other people out of their own insecurities. I don't know if it 's to make them feel better about themselves or if misery just loves company -- but it has been psychologically proven to be true.

So next time you're faced with the urge to judge somebody else, think about your own shortcomings. Think about why the judgment you have formed in your mind came about. This goes into various other areas, like someone pointing out "oh he or she gained weight" or perhaps they made fun of the way someone dresses or even their ethnicity -- why would they care so much? I never understood the motive of speaking so negatively about people you don't even know. My point being: I had always thought that the root to homophobia stems from being a homosexual themselves. But now I'm thinking that there's a more deep seated problem, like the one on the Top Ten Listed Commandments of that big book they read called The Holy Bible. Thou shall not commit adultery.

After Josh apologizes to his wife and family, do you think he'll apologize to all of the gays and lesbians who are faithful to one another?

So here is my "edited version" of Josh Duggar's apology to the LGBT community. Enjoy. 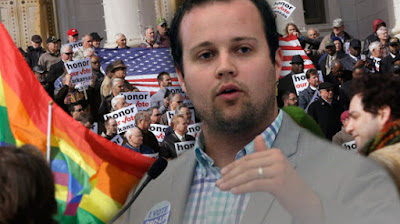 "To All Gays and Lesbians,

I have been the biggest hypocrite ever. While espousing faith and family values, I have been secretly over the last several years been viewing pornography on the internet and this became a secret addiction and I became unfaithful to my wife.

I am so ashamed of the double life that I have been living because I said so many negative things toward the LGBT community. All of those faithful same-sex couples heard my horrible comments toward them, as well as condemning them to hell.

Please forgive me for calling you sinners. The last few years, while publicly stating I was fighting against immorality in our country, I realized that the immoral one was me — not gays and lesbians. As I am learning the hard way, we have the freedom to choose to our actions, but we do not get to choose our consequences.

I deeply regret all hurt I have caused to so many gays and lesbians by being such a bad example. I humbly ask for your forgiveness. Please pray for my previous wife Anna and our family during this time.

This apology was rigged and edited by Debra Pasquella. Josh Duggar is not responsible for any tactful apology whatsoever to the LGBT community. This was a spoof. Thank you.


For more of Deb's articles, please visit: www.debrapasquella.com or join her on Facebook and Twitter. Check out her cooking blog for some of her famous recipes!
at August 20, 2015