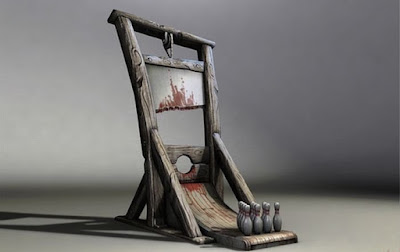 There have been countless stories lately about young children are being raped. One girl who happened to be 11 years old got pregnant by her rapist, and in her country, she had to wait out the full 9 months to give birth. I think once a grown man has either raped a child or an adult woman, he should castrated. Plain and simple. It should be known that once you rape someone, you will lose your nether regions, preferably very slowly with an extremely blunt knife.

But what about those who are just sexually fasciated by children? That's rape in itself!

How can anyone -- anyone -- watch anything remotely sexual if it has to do with a minor? How can a grown adult want anything sexual with a child? I just don't understand it. See -- I can understand some guy in his early 20's dating a girl who is in her late teens. "Statutory rape" is mostly enforced by disapproving parents. When I was 16 years old, my first boyfriend was 25. I did not look 16 nor did I act it. My parents even allowed for our relationship to continue because we were both mentally compatible. But what about these pedophiles that seek out child porn like Jared Fogle? Remember that famous pitchman for Subway? He lost 200 lbs from eating sandwiches (God knows how) and he became famous, made millions from being the Subway icon. Interesting... According to the New York Times, he's being charged with According to the documents, Mr. Fogle was charged with receiving and distributing sexually explicit images of minors and traveling across state lines to pay for sex with minors. 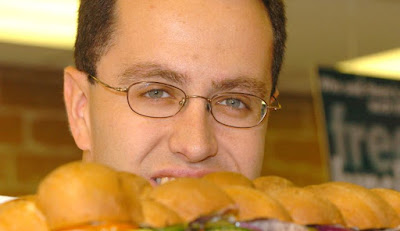 The article in The New York Times reads, "The news of Mr. Fogle’s plea came over a month after investigators raided his home in the suburbs of Indianapolis. Mr. Fogle’s name had been associated with an earlier case related to his nonprofit organization, The Jared Foundation, which encouraged healthy eating habits in children.

In that case, Russell C. Taylor, 43, the former executive director of Mr. Fogle’s Jared Foundation, was charged in May with seven counts of production and one count of possession of child pornography.

Mr. Fogle is also charged with using websites to arrange for sex acts with minors, and of traveling to the Plaza Hotel in Manhattan in 2012 to pay for sex with a 17-year-old girl. He later told the girl that he would 'really make it worth her while' if she set him up with someone younger. He is accused of frequently arranging his travel plans to coincide with such pursuits.

On Wednesday, local media outlets reported that Mr. Fogle’s wife, Katie, said that she would divorce him. 'Obviously, I am extremely shocked and disappointed by the recent developments involving Jared,' she said through a statement, adding, 'My focus is exclusively on the well-being of my children.'"

Remember Josh Duggar -- the antigay reality TV star and "traditional marriage" Christian family guy? He was busted for molesting his own sisters not too long ago when he was younger. A lot of right wing conservatives had given him a free pass and had forgiven him and said it was okay because blah blah blah blah it was so long ago. It was okay, because now he could still focus on those filthy dirty heathens he calls gays and lesbians. But let me get this straight: So Josh is a firm believer that being gay ruins the sanctity of marriage, but molesting his sisters and being on Ashley Madison doesn't? Last week while I was watching the news about how some hacker busted into the Ashley Madison website (a hookup site for married people) -- I knew that without a doubt, we were gonna find out something juicy. I hate to say that I was a bit joyous over the fact that Josh Duggar was caught -- but only because he's such a hypocrite. Most of these antigay conservatives have skeletons in their closets as it is. I was sure that Josh must've been secretly gay or maybe some kind of creepy pedophile since he's extremely antigay and had molested his sisters in the past. But he's just an average schmo cheating on his wife with other women. I admit, I would've been more entertained if he was looking for a "hot guy" over on Tinder. But atlas, another revealing story has reared its ugly head once again. Let's see him preach about how gays are ruining the sanctity of marriage now. Isn't adultery on the Top Ten Commandments? Strange, because homosexuality isn't.

But I digress. Going back to that creepy sandwich eating pedophile -- I just wish they would enforce castration on any man who sexually preys on children. I also include the same punishment for rapists. And with this creepy Duggar guy -- it just really gets my goat when I hear conservatives bitch and moan over same-sex marriage and yet they're online hunting for extramarital affairs with the big ol' molestation badge under their belt.

So Josh and Jared walk into a bar...

For more of Deb's articles, please visit: www.debrapasquella.com or join her on Facebook and Twitter. Check out her cooking blog for some of her famous recipes!
at August 19, 2015