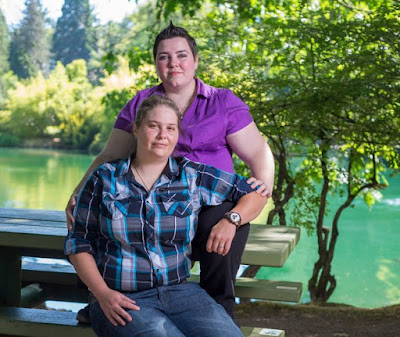 This is the very first time that Rachel and Laurel Bowman-Cryer spoke out about the owners of Sweet Cakes Bakery in Oregon. The story is sort of making more sense as it all comes to a head. Rachel's mother was getting remarried back in 2009. They had ordered a cake from Melissa Klein, the owner of Sweet Cakes and said it was "to die for". Everything was a success. I guess in passing conversation (small talk) -- Klein mentioned she would love to cater for them again if need be. Melissa Klein is in business -- she wasn't socializing. Every business owner will encourage people to use them again. That's totally normal. But what happened here was a bit different. Melissa Klein didn't realize that Rachel had a female partner.

Fast forward 2013, Rachel and her mother went into Sweet Cakes to cater for Rachel and Laurel's upcoming wedding. She was greeted by Melissa Klein's husband, Aaron.

Rachel tells the story below... 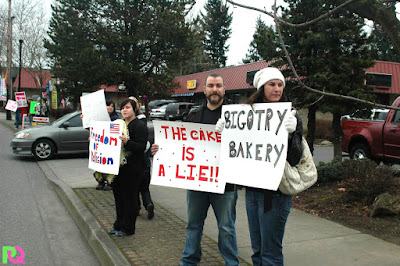 "Aaron stated, 'To get started, we need to get the bride and groom’s name.' And I just kind of giggled a little, and I think maybe she didn’t tell him and he didn’t know. I was like, 'Oh, it’s two brides.' And he put his clipboard down and he just said, 'Well, I’m sorry, but we don’t do same-sex weddings here.' I kind of laughed and said, 'Are you kidding?' I really thought he was joking with me, like just trying to give me a jab or something, and he was like, 'No, we don’t do same-sex weddings.' And I just sat there kind of stunned. I was just humiliated that this happened in front of my mom, whom I spent all these years trying to convince that we deserved equal accommodation, and we deserve rights, and we deserve to be able to get married. I was crying and she was trying to console me and say, 'Don’t worry, we will find somebody that will make you a beautiful cake.'"

I have such mixed feelings on this. On one hand, you have these two amazing girls who just want to get married and have a simple cake baked for them. Big deal, right? But the problem is, these owners may have had such huge religious convictions that made them feel as if they were "sinning" (although I believe homosexuality is not a sin), so it would go against their God. Fine. But where does the discrimination stop? Is it discrimination? There are many people who feel that "freedom of religion" is going to be abused and used as a bigoted way to discriminate and say, "No, sorry. We don't cater to same-sex weddings."

I guess maybe I'm more of a peacemaker, because I would just say, "Ok, that's fine," and trek myself over to another baker who would cater to my event. It's a tricky thing here, because back in the day when black people were being kicked out of diners and coffee shops because of their skin color, it was downright discrimination without 'god' to back it up for them. The Bible that most folks believe in says that being gay is a sin. And that's their belief. I read the same Bible and understand that homosexuality is not a sin. That's my belief and that's how I interpret it. Religion is very tricky. Being black is not a sin -- I mean lately, it seems like it is with all the racial issues and police brutality going on. That's very disturbing in this day in age. But for most Christians, being gay goes against their religion.

So do we push them around and say, "Bake me a goddamn cake?"

What I would do is first say, "I understand," and then give my business to someone else. Is that being a pushover? Or is that simply respecting another person's belief and turning the other cheek? I mean -- don't get me wrong, deep down inside I do feel that it's discrimination, but I'm not going to toy with someone who is opposed to my lifestyle. That's their choice. And yes, I do believe that my lifestyle was a choice, along with the genetics to push it in that direction.

The judge ruled that Klein's business was not a religions institution under the law and called it out for what it is: discrimination. I have a huge problem with the lesbian brides receiving $135,00.00 for being rejected when they could've just walked to another bakery. I mean -- how can you sue someone for just saying "no"? Maybe this will show business owners that they can't just pick and choose a sin and cast off their judgments so freely.  Maybe this was the final example that needed to be set so that we don't go backwards in society as we did 50+ years ago?

So I sort of sympathize with both groups. I would have walked away and let them hold their beliefs, but what would that mean years to come for other gay and lesbian couples who want to do business with heterosexuals? Here's what really scares me: The Republican-led House has approved the Michigan Religious Freedom Restoration Act, which essentially states that people do not have to perform an act that would violate their sincerely held religious beliefs. This means that EMTs, medical staffers and ambulances do not have to assist patients with life-saving treatments due to their religious beliefs.

So what do you think? Should we let our bakeries have their cake and eat it too? Or should we push further, so that this doesn't trickle down to religious people denying our rights to have medical assistance?