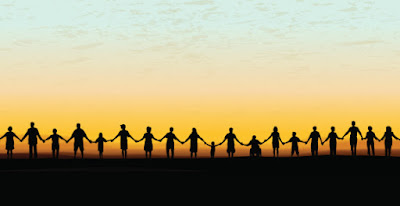 There's nothing wrong with being proud of who you are and what you stand up for, whatever the race, nationality or creed it may be. On a religious standpoint, religion is based upon historical events, along with faith-based "gods" and mythologies. That's even hard for me to type since my faith in God is very strong. My "faith" is my "truth", but I also know that my faith may not be somebody else's "truth". And that's OK. When does it come to the point of madness, when someone pipes in like a child, "Na-na-nana-na, my religion's better," and they go straight for the jugular in order to hurt somebody else's theological views or the lack thereof? Many conservative Christians are getting more vocal since two major events have taken center stage: 1. Same-sex marriage and 2. Caitlyn Jenner's outing.

As a writer for the LGBT community, I have never seen such ugliness in all my life. I have never seen so many Christians become these little evil demons spreading seeds of hatred all over the net. They feel safe because they're hidden behind a computer screen, but what happens when they blast their hatred up on a public post? What do their family and friends think of their bigotry? Well a Kingston college professor found out the hard way when he posted,


"It's the queers they should be hanging, not the flag!" 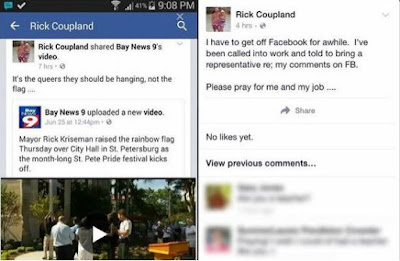 A St. Lawrence College professor has landed himself in hot water after a violent homophobic Facebook post. Rick Coupland, a full-time professor of business at SLC in Kingston, Ont. shared a Bay News 9 video of St. Petersburg Mayor Rick Kriseman raising a pride flag to start the month-long St. Petersburg Pride festival. Above the video Coupland wrote “It’s the queers they should be hanging, not the flag …”

Later Coupland posted “I have to get off Facebook for awhile. I’ve been called into work and told to bring a representative re; my comments on FB. Please pray for me and my job ….” (Sic)

The posts came within days of SLC Brockville unveiling its new Rainbow Way on July 14.

“Rainbow Way is the newly painted pathway on the Brockville campus that celebrates our LGBT staff and students and is a visual representation of the College’s inclusive community,” the SLC Facebook post said.

Kelly Wiley, director of marketing and communications at SLC, spoke to the Whig-Standard on behalf of the school. She said the school received a complaint about Coupland’s post, but did not say if it came from a fellow staff member or a student.

“We are aware of the situation,” Wiley said. “We’re currently conducting an investigation … because this is a personnel matter I really can’t comment further about the complaint, nor about anything beyond the fact that we are doing an investigation.”

In an email to the Whig-Standard, Coupland did not wish to speak about the investigation.

“Let me get through my meetings with the College on Monday and Tuesday,” Coupland wrote. “I’ll probably get back to you after then.”

Wiley said SLC has its own set of policies and code of conduct that will be reviewed during the investigation. “We have several policies that apply to the conduct of our employees,” Wiley said. “This includes the fact that we adhere to the Ontario Human Rights Code, we also have harassment policies, a policy around outside activities of college employees, and our collective agreement.

“Those are all policies that certainly guide the conduct of our employees, and are going to be part of this investigation.”

The Ontario Human Rights Codes, enacted in 1962, prohibits the discrimination of people based on their sexual orientation amongst 13 other protected grounds. Wiley said Coupland is still employed at SLC.-----read more here. Courtesy of The Province 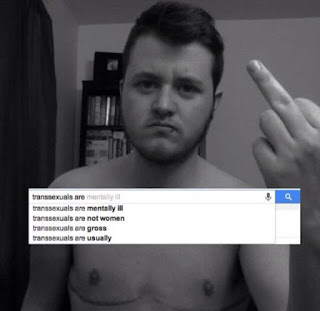 Maybe this next comment or should I say, "assumption" on my part can be seen as "judgmental", but whenever I see people bashing one another over who they are, no matter what it is -- it shows me that there is something lacking in their lives. Most conservative antigay people are usually not educated, and if they are, they lack any sort of social filter that would enable them to communicate like a human being. Another "assumption" that I have seen come to pass, are antigay people coming out of the closet as homosexuals. Repression brings out anger and denial. It also can bring out the real person hiding underneath that religious blanket. It's interesting to see the reason why conservatives attack gays, lesbians and transgenders. But seriously, doesn't reek of a hidden agenda? Doesn't speak volumes about who these people truly are? Even when Caitlyn Jenner came out, everyone was throwing darts at her! "Oh 'he' has no remorse over killing a woman!"  --- They said zero about her being transgender or spoke about how she accomplished a lot in her life other than to call her a murderer for an accident that could've happened to any single one of us. I call that the straw man argument. 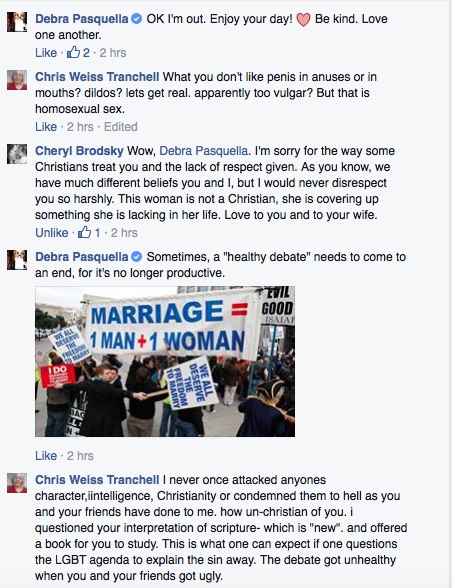 There are some people out there in this world, much like Chris Weiss Trancell. She had given me some Scripture to read, telling me that I was going to hell due to my lifestyle. When I showed her my interpretation of the Scriptures, she said I was "cherry picking" -- even though I was giving her the original derivation of the written text. She wanted no part of it, so I tried ending the argument with one of those, "We'll have to agree to disagree," type of peace offerings, but she snapped, making lewd comments about sexual acts and how homosexuality is, or thought-to-be in her mind. Chris got upset and said something totally bizarre that had nothing to do with the topic. She said, "What, you don't like penis in anuses or in mouths? Dildos? Let's get real. Apparently too vulgar? But that is homosexual sex." I knew right there that there was some sort of mental disability or regression that I wasn't willing to entertain. That's something for the professionals to deal with. But what would make a 'seemingly' nice older lady lash out so violently like that? First of all, people's misconceptions about homosexual sex is way off. And the other thing is, why do these sort of people only think about sex when homosexuality is the topic? They don't see two women being lifetime companions or two men growing old with one another. When heterosexual couples get married, they think about them being together, having children and growing old together. They rarely bring up sexual acts or whatever they prefer behind closed doors. That's their business. 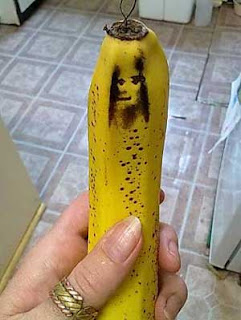 It's also our business.

Many Christians feel that they are being pushed into silence regarding their bigotry. Well damn straight you are (no pun). Bigotry in any form is not going to be tolerated. Your "freedom of religion" does not mean you can bash people that you don't think are going to "heaven". Your belief, your "mythology" of what you think is true is just a faith-based opinion from a book that has been translated over and over and over again. The one thing I find ironic about Christians who enjoy bashing gays and transgenders is that they all claim that they're loving, meanwhile, they're saying that they should hang themselves or make disgusting sexual assumptions about them, and then have the audacity to call it "Christianity". #WWJD? Well, I'll tell you what would Jesus do. He'd weep for these people. They are not Christians, but Satan's spawns. This also trickles down into teaching their own children how to hate and harass others who are homosexual or transgender. I blame Christians for the attacks and abuse of the LGBT community. The sad thing is, I'm Christian! But the Christianity I stand behind is the one where Jesus said, "Thou shalt love the Lord thy God with all thy heart, and with all thy soul, and with all thy mind. This is the first and great commandment. And the second is like unto it, Thou shalt love thy neighbour as thyself." 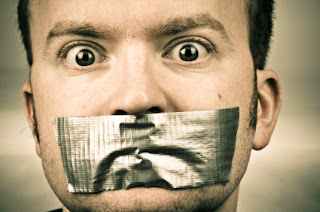 They're doing everything but.

But, we already know who won. Love won. We have won the fight over these bigoted people's fight to shove us back into the closet. They want to hide the true meaning of the Biblical scriptures and make sure that we never speak again. They want to discriminate and call it "freedom of religion" and kick us out of their businesses and/or refuse medical emergency procedures on us, if they do know that we're gay. This world is getting uglier and uglier by the minute and it's not going to stop. The conservatives are angry and they want revenge for humans having equal rights. They better get to know God more, because what they're doing is the devil's work.