Anonymous Calls for a "Day of Rage" for Sandra Bland 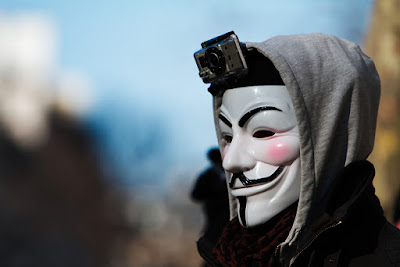 How can Sandra Bland rest in peace when we're having another racial war in her name? But let's face it -- the war has already started. I took to Facebook with my previous article regarding Sandra's story and stated my opinions. For one, I think what the officer did was wrong. Plain and simple. He should have deescalated the situation, not blow it out of proportion. But who is in the wrong in the bigger scheme of things? First off, I was raised (yes, as a white girl) to never disrespect authority. It has nothing to do with being black, white, Christian, gay, straight or other. It has to do with respecting those who are in command to protect and serve us. Given the fact that we are all human and we all have some sort of hidden stash of raw emotions brewing, some of us just 'lose it' when it's the last straw that broke the camel's back. Is it right? No. But does it happen? Yes. 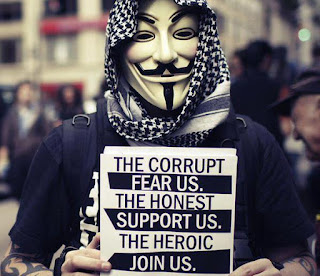 Whether we like it or not, due to the defiant behavior of Sandra Bland, the officer lost his marbles and swung the car door open against her will. Don't forget, racial tensions are already elevated when it comes to a white officer and a black citizen -- on both sides. My question is: why would you challenge an officer who is already on guard as it is about racial issues? There are way too many people shoving their phone cams in police officers' faces and not complying with what's asked of them. They're not doing it because it may be "their right" -- they're doing it to show 'Merica how corrupt and brutal our cops are. And no doubt, there are many corrupt and racist cops out there -- but not all of them. What if you were to get someone who had no racial issues to begin with and you decided to start resisting every single command you were asked to do within reason? Whether you are black or white, you're going to be detained.

Even Anonymous calls for a "Day of Rage" and took to Youtube and Twitter announcing their #RAGEFORSANDRA -- a protest to arrest Officer Brian Encinia. If you think the protests and riots were bad before, think of all the horrific riots times a hundred. Take a look at this video below. If you can't view it, please click here.


As we head into the "details" of Sandra Bland's death, it does seem very suspicious that she would commit suicide when she knew she was getting out. Even if she was suicidal, in my very own opinion, it doesn't seem logical. But neither does a temporary situation appearing to be a permanent one in the mind of a very depressed person. They ruled out homicide and concluded that she committed suicide. Like I said before in my previous post -- everybody seems to have a forensic degree since they're trying to figure out how she died. But then you have to ask, "Where were the video cameras? Where were the witnesses?"  The person in the cell next to her said she heard no signs of a struggle. Can we believe that? Can we go on what the police department tells us?

When I posted my feelings on my Facebook page, I had a slew of black women telling me, "Well, you're not black so you have no idea." No, I'm not black, but I do have compassion for those who go through such horrific ordeals. And the fact that I stand strong in my stance that anyone who disrespects an officer will find that it doesn't end well. You'll either be arrested or worse off, dead by a corrupt nut job of a cop who lost his marbles. Is it worth your life to act tough and shove your phone cam in their faces? Is it worth your life to say "no" to everything the officer asks you to do? Is it worth your life to prove a point to America that this world is in fact, corrupt? I was thinking -- maybe Sandra Bland can be our new hero dying for a desperate call to action to stop police brutality. Maybe we needed someone brave like Sandra Bland to show everyone how bad it really is. So next time you're pulled over and you decide to be rude to a cop, be sure that it's your life you want to risk. You've seen it all too often how "accidental" these deaths "seem to be".

Another thing that sort of irritated me were all the black women on my Facebook page getting the facts completely wrong. "Well, she pulled over for the officer and didn't use her signal. He pulled her over for nothing."

Wrong. Officer Encinia pulled Sandra over because she zoomed out of the parking lot, right through a stop sign without signaling. That's when he made the u-turn. It's on 1:11 of this video. It's factual. See, I have a huge problem when racially motivated lies and exaggerations are used to incriminate someone. Yes, I do believe what this officer did was wrong, but I do not believe what she did was right either.

Then it got worse. I have a disclaimer on my page saying that I will not tolerate any abuse or verbal attacks (slurs) agains one another and that I would delete, report and ban whoever it is that made the statement. Most of the people I banned from my Facebook page were black woman using racial slurs. I was so shocked over this because it just shows us how much we're lacking as a society. I do feel that we are in the midst of a total breakdown of society. There was a video of Sandra Bland going on about racial tensions and stated that white people probably only have like 1 or 2 black friends.  She had an axe to grind with white people and softened it up by stating "she wasn't a racist" -- but but but.  She encouraged her black viewers to challenge cops and to know their rights. Yes, know your rights, but be respectful. What she did once the cop stopped her was give him an attitude. Cops are usually accustomed to this sort of behavior. But when does it come to the point of being totally out of control, calling the cop a mother***er and doing everything in your power to piss him off? When does it stop? Unfortunately, she lost her life by being arrested and flung into jail. But what happened next? Nobody knows. That's the scary part. That's the part where I would definitely take two steps back and rethink my decision to "stand up to cops" -- because the way I see it, it's like the mafia. Nobody knows nuttin'. It's a cut 'n dry case of "suicide". 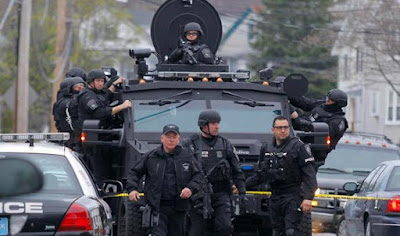 Should I take it even further? Of course I will. You know, we're not too far off from Martial law. For those of you who are not familiar with Martial law, it's the imposition of the highest-ranking military officer as the military governor or as the head of the government, thus removing all power from the previous executive, legislative, and judicial branches of government. In other words, our country will be a complete dictatorship and a breakdown in society. Read more of it by clicking here. It even tells you how to survive Martial law. They seize power, food, fuels and any type of equipment. We're not too far off from this because we're seeing such a huge division of society and of law officials. I'm not one for conspiracy theories, but I do believe that one day this'll happen within our lifetime at least. I especially feel that it there are more destructive riots as we've seen in the past few years, we're going to head into this very dark world of control. They will control everything out of fear -- out of fear of their own society.

If this sounds too far-fetched, please look into it. Google it. Read reputable websites and articles regarding Martial law and how it comes to pass. History repeats itself, this time, it's America's turn. Are you ready?

For more of Deb's articles, please visit: www.debrapasquella.com or join her on Facebook and Twitter. Check out her cooking blog for some of her famous recipes!
Anonymous Brian Encinia Day of Rage martial law protests racial issues Rage for Sandra riots Sandra Bland