May Sandra Bland Rest In Peace 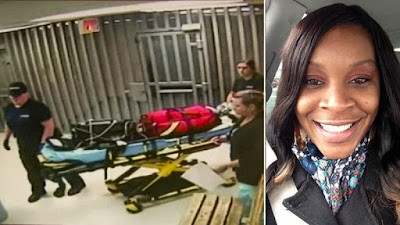 It's the first time in a very long time when I just have to say that I really don't have an opinion. The public has a right to their opinion and a right to lose "Facebook friends" over their psychic abilities to truly know what went down in Sandra Bland's cell. In a matter of days, everyone seems to have gotten a degree in forensic studies and law. We know she had epilepsy, we know she suffered from PTSD and we also know that she was awaiting bail money from her family to get out of jail from such a petty traffic violation. Why would she hang herself? Could it have been because this may have been the last straw that broke the camel's back? Could it have been that she was so sick and tired of being treated poorly by the authorities because she was black? Now I'm starting to sound like a detective like everybody else.

I do have an opinion on something though. I have a very strong opinion about being disrespectful to law enforcement. Even if, your "rights" tell you that it's OK to refuse showing your I.D. or to get out of your car -- do it anyway. When you refuse to do these little things that you think seem so intrusive -- you make the police wonder about your motives. The cop asked, "Would you mind putting out your cigarette, please?" Do it. After all we have seen regarding police abusing their power, why would you take a chance and challenge a cop? Why would you want to anger someone who is already defensive to begin with? It was a petty traffic violation (to which leaves me to believe they have nothing better to do around that area), but fight it in court -- not in the street with a cop who has a gun in his holster. 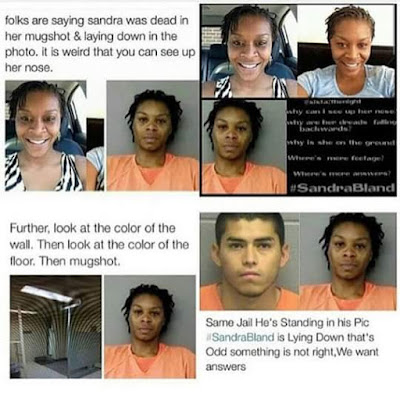 People need to leave the forensic studies to the professionals. Did she hang herself? Was she strangled? Was her mugshot taken while she was deceased? Look at this photo on the left along with the commentary. It's horrifying to even think that this is a possibility! How truly morbid! I hope to God that these assumptions are wrong, but anything is possible. I know a few people who have epilepsy. Stressful situations and trauma can certainly set off a seizure. Did the police panic after she had a seizure and make it look like a suicide so they don't get hit with another blame once again? And of course you have to take into account that someone with severe depression looks at a temporary situation as a permanent one. Have you ever heard someone console a suicidal person? They usually say, "Suicide is a permanent solution to a temporary problem." Many suicidal people cannot tell the difference when they're in such a state. Another thing that bothers me is that there are tons of video cameras everywhere you go, from the street right into every single corridor, office and even waiting cell. Why wasn't there a video footage of her? Why didn't anyone go and check on her after an hour? There are a lot of questions and there are also a lot of answers. 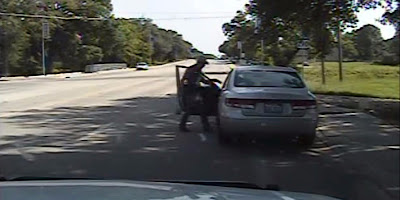 And again, I truly don't have an opinion on this. I am reading and listening to all opinions, reports and assumptions in horror. Even if she angered the cop and resisted her "right" -- her right to refuse to get out of her car -- he should have had self-control and remained calm. It could have been treated much differently. But after she refused to put out her cigarette, he just popped his cork and you can totally see it. You have to think -- you're a cop -- you see this shit every single day. You see insubordinate people in your line of work. What makes this situation any different than another? I don't know what their protocols are, but forcing her out of the car and arresting her is uncalled for to start with. So right there, I guess I have formed an opinion.

This world is so sad sometimes. You have such damaged people on both ends of the spectrum: from those who are in authority who have been abused by the public, to the public who have been abused by the authorities. It's a vicious cycle that'll probably just worsen over time if nothing is done. Everybody is on the defense. Black people don't trust white people and white people don't trust black people. We're dividing more and more each day. Shouldn't it be the opposite? Shouldn't we come together and figure out a solution to this problem? Sadly, and I admit, there is much more racism out there than I initially thought. And while I was viewing the video (and this could be just me) -- the cop was super nice to the lady who was stopped before Sandra. He was making small talk. The only "small talk" he was doing with Sandra was, "Where are you headed off to now," as if she was trying to cross the border. For someone who didn't use their turn signal, why would you even have to know this?

My thoughts and prayers go out to the Bland family. What a horrible and tragic thing, from a petty traffic violation to your very own death. I also have sympathy for this cop who clearly has anger issues to deal with. I've learned that we're all imperfect in various ways and sometimes, our actions can do much more harm than initially thought. Did this cop kill Sandra Bland? I don't think so (physically speaking), but the combination of both the cop and Sandra's reaction toward one another was a lethal one. May Sandra Bland rest in peace. This should've never happened.

Here's the video in full below. If you cannot view the video, please click here.

For more of Deb's articles, please visit: www.debrapasquella.com or join her on Facebook and Twitter. Check out her cooking blog for some of her famous recipes!
black lives matter PTSD Sandra Bland suicide