Polyamorists Want to Put the "P" Into "LGBT" 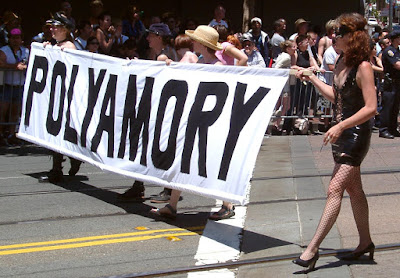 What does it mean to be apart of the LGBT community? They have even gone as far as "LGBTQIA". Most of the 'initialed' community has a common denominator: sexual orientation, gender identity or an advocate or alliance -- people who support our rights. But what happens when someone wants to add to the mix? What happens when someone who is polyamorous wants to add the "P" into the "LGBTQIA"?

First off, let me just explain what all of these terms are. There are many people who do not know what LGBT or polyamory stands for. So bear with me.

Polyamory -- (from Greek πολύ poly, "many, several", and Latin amor, "love") is the practice, desire, or acceptance of intimate relationships that are not exclusive with respect to other sexual or intimate relationships, with knowledge and consent of everyone involved. Basically, non-monogamy.

So what does the entire "LGBTQIA" stand for? 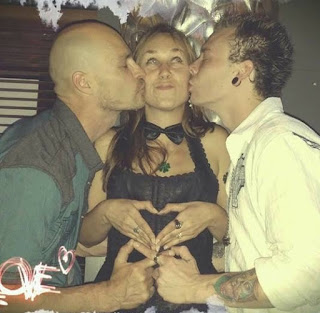 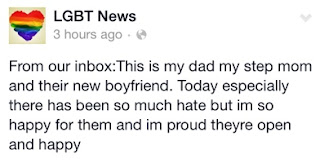 This morning when I logged onto my Facebook account, I noticed a post by LGBT News, which gives me the latest on what's happening and perhaps a few inspiring memes (which I can do without). I saw a post (the picture and description above) that sort of touched a nerve with me. They received an inbox message with someone celebrating their father and his step mother's new boyfriend. You can read that again. I had to read it several times. I started to read the comments supporting this and thought, "Where've we gone wrong?"  As a society -- as a community -- we are trying to show people (mostly conservative 'Merica) that we are worthy of our rights, especially same sex marriage. How is this going to make us look good when it only promotes promiscuity and not a loving relationship between two people? What about the children? What happens when the child sees mommy and daddy go into the bedroom with their new boyfriend? Does this promote a reckless lifestyle for the kids? Is it healthy? I can't see this being good for children to witness. Maybe I'm wrong?

Getting back to the "LGBTQIA": these are defined by characteristics that we as a community cannot help because this is who we are. We gravel at the concept that being gay, lesbian or transgender is a "choice", and yet here are some people who are obviously making the choice to be with one or more persons. In my book, that's called cheating. Yes, they are all aware that they are in some strange triangle relationship (sometimes square, sometimes octagon). I have even heard people say that we were not born to be with just one person. We were meant to be sexual with many partners. For me, I cannot wrap my head around that concept (probably due to my OCD issues), because to me it spells out: D*I*S*E*A*S*E.

I was called, "judgmental".

Fact is, it's none of my business how people want to live their lives. I personally know several people who are in polyamorous relationships. They don't last long. The thing is, we were meant to be monogamous because usually, in a multiple partner relationship, two people in that trio fall madly in love with one more than the other, leaving the third party out. It happens 98% of the time. I don't judge them, but I do wonder where it'll go. I can see a couple of "acceptable" scenarios: the marriage became a little stale, and they took someone into their bedroom to spark things up. OK, do what gotta do, but make sure it is a temporary thing. People who do that usually end up breaking up, or falling in love with the new person. My second "acceptable" scenario is: you're young and finding your way. That is OK. Back in the day, we used to call it "seeing people". I think they may still use the term. I remember being asked, "Well, are we dating or are we 'seeing each other'?" (Which ultimately meant -- seeing other people as well.)  It wasn't called polyamory back then, but it wasn't supposed to be long-term. It was not a three-four-five way relationship -- it was "acceptable cheating". Nobody knew who was dating who and that was that.

Eventually you want to settle down. Most people do. I cannot picture growing old with two wives. I cannot picture having a "sister wife" or catering to more than one woman at a time. And hey -- I went through my "seeing people" days and it. was. not. fun. It's not the exciting picture that it makes itself out to be. It's quite exhausting and dramatic to tell you the truth. So am I really judging people? No. Because I went through this polyamorous phase myself. It's selfish, it's demeaning for the one partner who isn't so into it and it's a sure way to sever ties with one or the other person. It shows a huge amount if insecurity with yourself as well as with your entire life. When I say insecurity -- I don't mean that in a bad way. I mean, the uncertainty of who you are and what type of person you want to be with. It's the fear of not finding Miss or Mr. Right. It's the fear of being alone. It's the fear of people not finding you attractive. There are many underlining issues under the guise of polyamory.

I want to trek over to the misunderstood lifestyle of bisexuality.

The "B" in the LGBT is all about those who aren't strictly attracted to either male or female.  It's more about the person than it is the gender. They get a bad rap, because most think that bisexuals just wanna "have their cake and eat it too". They are seen as polyamorous, when in fact most are just seeking a partner -- "equal opportunity gender" type of thing. They are not promiscuous, they are just people trying to find another "person" regardless of gender. I know many lesbians who roll their eyes at bisexual women and refuse to date them. We're also told, "Never date a bisexual woman -- she'll always leave you for a man."  False. Since I'm not a fan of labels, I am marked with the "L" -- because I'm married to one person who happens to be female. But truly, I am "B" -- because I have dated men and women before my wife. I could not decide based on gender alone who I'd rather be with. I had to decide based on love.

And isn't that what it's about? Love? 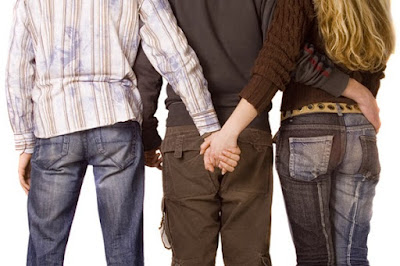 How can you love more than one person at a time? I mean -- you can, but in different ways. There is a type of "love" that's super passionate and intimate -- the kind of love you want to see last a lifetime as well as morph into a contented committed union. Then there is a type of love that's more of a 'nostalgic-ex-partner-familiarity' type of love that seems to linger on, even if in a new relationship that outweighs the old. That's the only time I can definitely see loving two people at the same time. Both are love, but one is in real time, while the other is only past tense-lingering time. (Does that make sense?) If you tell me that you're gaga over two people at the same time, who you are intimate with -- then it is purely sex-driven. Sex-driven relationships do. not. last. very long. They are based on sexual adrenaline. When faced with more of a contented phase, the relationship will end, while the monogamous will be grateful to be in this second phase of love.

You see, my real issue with polyamorous people is that they want to include the "P" in the "LGBTQIA".  No. No. And. No. I say this because we are trying so hard to gain acceptance, gain our rights, gain our freedom to marry whoever we fall in love with. Do you really think that we'll be taken seriously if we have several people under our arms? This is the very reason I don't attend gay pride parades. There are so many gays and lesbians who make a mockery of us. They prance around with hardly any clothes on, some actually performing sexual 'innuendos' on each other (to where they can't get arrested for lewdness) to where you would fear having children being present at one of these events. We're called "perverts" and "heathens" because other people make us look like a bunch of sexually driven animals.

Now at the risk of sounding like a bigoted, religious, right-winged conservative, I'm going to ask a question that may infuriate you. It's the same questions that gets asked by religious people when faced with those who want same-sex marriage.

Sibling/Mother/Father/Child relationships. As sick as this sounds, there are actual pedophiles out there who say that their "child partners" have consented. They want their rights too. Is it too far-fetched? To put the LGBT community into such a category leaves more room for opposition and ridicule. It speaks volumes about the reality of what religious conservatives are saying about most who are gay only because they are promiscuous. And they're out there. But to those who are truly homosexual and just want a relationship with someone of the same gender -- this is what I stand for. This is what the LGBT stands for. Love is love -- but love is not love(s) -- that's just being selfish as well as promiscuous. I'm curious if anyone who is polyamorous claims to be religious or has faith in a God... That's a whole other can-o-beans. There are known Mormons who live this way, so why not right?

For more of Deb's articles, please visit: www.debrapasquella.com or join her on Facebook and Twitter. Check out her cooking blog for some of her famous recipes!
gay marriage gay rights LGBT LGBTQIA love polyamorists polyamory same sex marriage sex