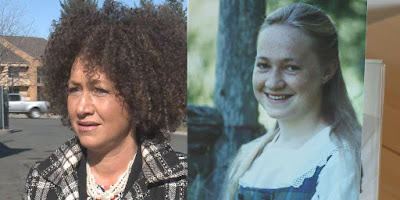 This is the first time I have really been quite confused over something -- well maybe the second, third or fourth time -- but I can't help but wonder what the true issue is. I read the story about Rachel Dolezal. She is the NAACP, civil rights activist in Spokane, Washington who lied about being black. Yup -- read it again. From Jan Brady to Macy Gray -- Rachel has really transformed her entire look, image and overall self. They're calling it "transracial" now. I have never in my life heard of this term before. Part of me feels like a hypocrite for being a transgender advocate due to this story being such a hard pill to swallow. But it is so very different: one is genetically derived from birth while the other is purely environmentally driven and clearly "chosen". During an interview with Jeff Humphrey from KXLY4, she was presented with a photo of her father who was clearly caucasian. They asked, "Is this your father?" She could. not. answer. They even asked if her father was black and she basically said, "I don't understand the question," and then zip lined out of the frame. The look in her eyes after being asked if she was African American spoke volumes. It screamed humiliation. It screamed out all of the people who she falsely represented.

Or did she falsely represent them?

She falsely represented herself. 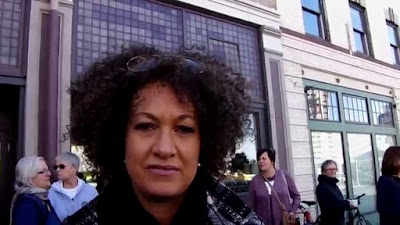 According to Rachel's mother, she is Czech, Swedish, German with some Native American heritage. I can understand if she's an advocate for civil rights, but do not claim to be apart of the heritage and history of African-American people. There's a huge difference. I have a big problem with anyone calling this 'transracial' -- this only makes it worse in arguments used to fight for transgender rights. Transgender people are wired much differently from birth. Being transgender is not an environmentally influenced "choice" -- but claiming to be black when you are clearly white is a choice as well as a lie. She has not only betrayed the people she supports, but she has made a false illusion of herself -- a false identity to which she mutters out words such as "we" and "our" while defending black America. And there are some black people who are very appreciative of her support, regardless of her disguise.

So should we all be upset over this? 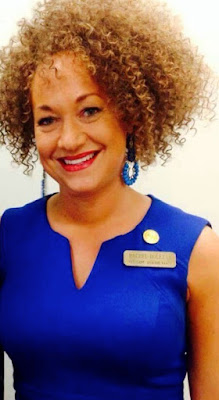 Would this be called "racial dysphoria" or some sort of personality disorder that went unnoticed? I remember back in high school we had a lot of white people who assimilated quite well to the hip-hop culture, wearing clothing that were mostly worn by black people. Some of the white students were harsh and even called them "wiggers" -- putting the letter "W" in place of the "N". And these days, the "N" word doesn't seem to be a "bad thing"-- unless you are of another culture spewing this bullshit out. It's not only offensive, but it's demeaning to your own character to even have said them in the first place. Anyway, back to the "transracial folk" in my day: their lingo and language were all part of what you would hear in a poverty-stricken ghetto, just to be seen as "cool".  These ignorant kids thought it was cool because it was the "style" to do that, without even having the background, the knowledge, the pain, or the suffering of what it was like to have lived in a poverty-stricken environment. You have no right to act the part, especially when your parents just bought you a new BMW.

But should we care? She has done more good than harm for the black community. But there was a reason to her madness. Without a doubt in my mind, this stems from not only being a huge advocacy for the African-American community, but also to conform to an image -- a person with the historical background and experience for the four African-American siblings her parents had adopted. Many people have a hard time with white parents adopting black children due to not fully understanding their heritage and background. Maybe she was doing this purely out of a loving and genuine motive to prove that she was knowledgeable and educated on black history. And she is.

She identifies as a black women in this article below. 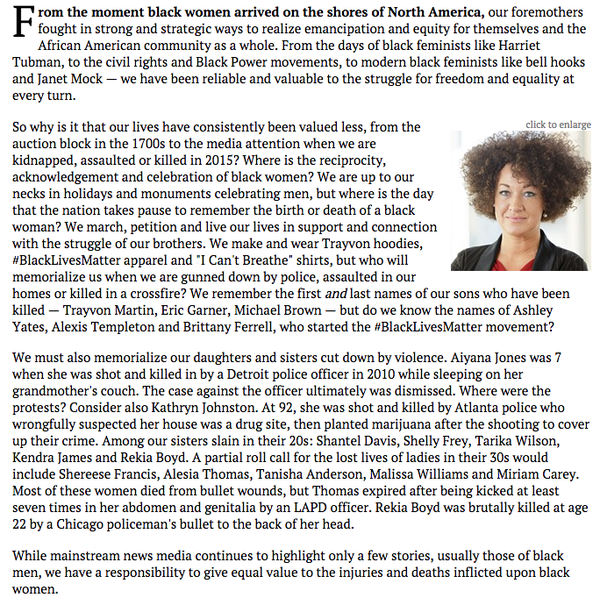 There are a lot of people who are angry over her misrepresentation and there are also people who really don't care, stating that she has done more good than harm. And honestly, I cannot tell you where I stand on this issue. Let's face it, lying is bad, but what if your lies become your "truth"? Sometimes people who lie for so long actually believe it after some time. It doesn't make it right, but we also have to question her motives as well take into consideration that this may have been a psychological issue.

So with that being said, should this really be an issue? Has she truly betrayed the people she supports? She is an academic expert on African-American culture and teaches over at the Eastern Washington University.

And should people be flinging the word "transracial" around?

Would love to hear your opinion. If you'd like to respond, please join me here.

For more of Deb's articles, please visit: www.debrapasquella.com or join her on Facebook and Twitter. Check out her cooking blog for some of her famous recipes!
NAACP Rachel Dolezal transracial