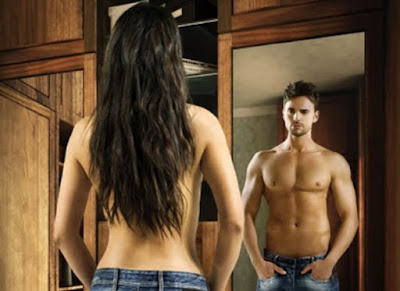 As much as we should be understanding to our transgender community, in return, understanding for the unexposed has to be given too. There's a huge difference between being bigoted and downright rude, as opposed to being curious and inquisitive about the unknown. There are even "rules" about what to ask a transgender person for people who have never come across transsexualism. Given the fact that nobody should ever ask anyone of any gender details of their genitalia -- there has to be some level of unspoken and obvious truths. Nobody seems to care about the 800 lb gorilla in the room. That's exactly how it feels to someone who has never been exposed to the transgender community. So if you want to educate society (to which some believe they should educate themselves, which would be wonderful in a perfect world) -- then why are we super sensitive when asked an obvious question that is clearly driven by basic human curiosity? 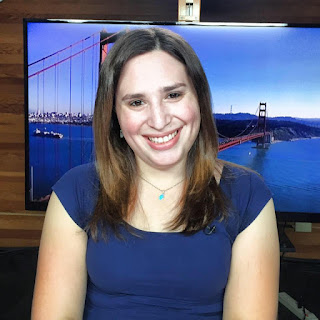 A transgender medical student named, Hannah Elyse Simpson was interviewed on Good Day NY this morning. Greg Kelly stated that he knew there were certain questions not to ask, and if he needed to ask personal questions, he'd have to ask the person if that was okay.

Hannah said, “Well, as a basic rule of thumb, if you’re asking about my genitals, I hope you bought me dinner first.”

Hannah replied, “Well, different people have different thresholds with it. As a medical student, part of my interest is to help educate people on this and be a little more open with my own experiences perhaps than other people might be. But since nobody’s asking you about your genitals, on the air or in private — I think that’s the standard we should go with for anybody else.” You can watch her interview by clicking here.

In my own personal opinion, I don't think anybody should have the audacity to inquire about anyone else's genitals, unless they are perusing a romantic role in their lives. I have even heard from a couple of friends that even that question posed by a potential date is wrong.

People have certain preferences when it comes to an intimate partner. So is it 'out of line' to ask about someone's genitals if you knew for sure that they were transgender? 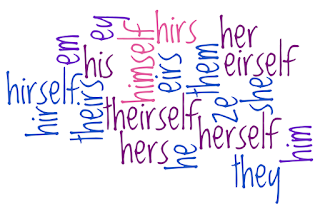 I'm going to give you a personal scenario that I had gone through, but changing the name of course. So "Steve" was a very close friend of mine. I knew him as Steve -- the Steve who was married with three beautiful children. I always thought he was a bit more 'metrosexual' as they call it -- in other words, my gaydar didn't go off, but there was something soft-spoken about his presence. He wasn't gay and he never implied that he wanted to be a woman. After his divorce, Steve came to me as a man with no evident signs of 'changing' and said he was a woman. Back then, I was never exposed to the transgender community, so I had no clue on the proper etiquette, especially using proper pronouns. "Steve" was now, "Stephanie" without any huge changes to her appearance.

During at a get together at my home, I had mentioned that Stephanie was an incredible musician and that he could play almost any instrument thrown at him. 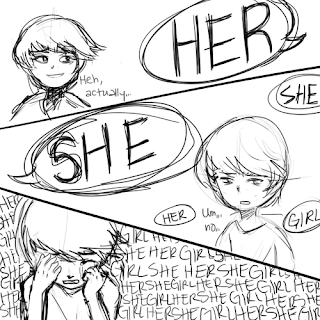 With the uncomfortable silence, came embarrassment and humiliation of hurting my friend. My friends all saw a clear-cut-visible man, and well, so did I. I wanted to be compassionate to her request, but it kept slipping out all the time to the point where I had to pull my friendship back a little due to her beating me to a bloody pulp each time a pronoun was slipped. As she began assimilating well into her womanhood, showing nothing but feminine qualities, it was easier for me to refrain from messing up again. But at this point, I was so scared to hurt her repeatedly -- I was scared to slip up and say, "him" or "his" and "he".  And now, she was clearly all woman -- all 6'3 feet of her. I can't imagine the pain and emotional torture she had gone through between her divorce and people (like myself) not 'getting it' as fast as I should have.

That was my first experience and life lesson with having a friend tell me that they're transgender.

Our friendship came to a tragic end when she lashed out violently at me for no apparent reason. Maybe she was upset over past 'slip ups' of mine, but this was truly uncalled for. I received a phone call the next day with an apology and an explanation that she was not accustomed to all of the hormones she was taking. And believe me -- I can relate to those mood swings. But then I questioned: "Is this really healthy for you?" I'm sure it wouldn't be healthy for her to go back to someone she wasn't, but it was a valid concern of mine. She would dive into deep depressive episodes with periods of psychotic rages. "Steve" never did that before. Stephanie began to develop a lot of emotional and mental issues that could not be tolerated by her loved ones, unless she volunteered to get some help. She refused.

On my Facebook page, a reader named, Lisa Garofalo Allsopp commented, "There are, and have been for a good while, a number of trans-ition vlogs on YouTube that are incredibly honest and informative regarding every question imaginable about gender identity. This one is probably the most poignant and honestly pure answers regarding gender and physiology, for the gawkish and straight-minded. I hope you find it apropo."

This is a very honest video of a young transgender girl talking about her opinion about her gender. Please click here if you cannot view the video below. Please watch it to the end. It's pretty shocking someone who is a transgender female would say this. But I commend her on the right to have her own opinion -- even if it's quite harsh.


Wow, right? Not only would this be a slap in the face for many transgender women out there who have undergone the sexual reassignment surgery, but I can't help all the questions swirling inside my mind. I'm sure everyone has these questions as well. To even use the word "fake" is just harsh. But the thing that makes this "acceptable" is that she is a transgender woman, not a straight cisgender woman who is being downright ignorant. Here's my issue when it comes to transgender people "reprimanding me" on proper etiquette and insinuating how all transgender people think: not all transgender people are alike nor want to complete the physical aspects of their transition. So when "ignorant society" has a question that may offend some, is it possible that they should be given just a little slack when being inquisitive on a very personal matter? Again, in a very perfect world, it would be so wonderful if society would educate themselves. But it's not perfect. In fact, it's so torn apart. So with that being said, maybe the transgender community should speak up more, like the medical student, Hannah Elyse Simpson did.

There is always some sort of "social etiquette" when it comes to talking about anything personal, such as genitalia and asking questions of a sexual nature. Being that I'm a lesbian, (which I hate to label myself with) I've had questions that have literally floored me at times. Questions that were so ignorant I had to hold back and remind myself that some people just don't 'get it'.

In terms of educating society on what it means to be a transgender male or female, I think that it's great that mainstream media is getting more and more public with this, thanks to Caitlyn Jenner. I mean -- don't get me wrong, there have been movies and TV shows that displayed transgenderism, but mostly, people are getting educated about this through the mainstream media. There are times when I have a few questions for my friends who have transitioned and they are so gracious and genuine with me, to which I am so thankful for. I am grateful to have known and still know some wonderful people out there who are transgender -- who actually take the time out and educate me -- who are genuine and sincere friends of mine that I have learned so much from. I've seen their struggles, yet never experienced them. As much as they educated me, I took the time to read up on it and learn more in generalized articles and write ups. But that's not enough sometimes.

We just need to BE.

For more of Deb's articles, please visit: www.debrapasquella.com or join her on Facebook and Twitter. Check out her cooking blog for some of her famous recipes!
at June 02, 2015