Do You Really Believe the Confederate Flag Only Symbolizes "Heritage" and "Southern Pride"? 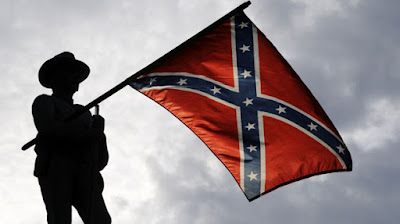 There has been so much chatter on social media about the Confederate battle flag. After the Civil War ended, the Confederate flag symbolized Southern pride and served as a memorial for the soldiers who had died in battle. But we cannot ignore the reason why this flag -- why the Civil War started in the first place. South Carolina was the first to secede from the Union in December of 1860 shortly after Abraham Lincoln, from the anti-slavery Republican Party was elected president. An article in the U.S. History's website states this: "Defenders of slavery argued that the sudden end to the slave economy would have had a profound and killing economic impact in the South where reliance on slave labor was the foundation of their economy. The cotton economy would collapse. The tobacco crop would dry in the fields. Rice would cease being profitable. Defenders of slavery argued that if all the slaves were freed, there would be widespread unemployment and chaos. This would lead to uprisings, bloodshed, and anarchy. They pointed to the mob's "rule of terror" during the French Revolution and argued for the continuation of the status quo, which was providing for affluence and stability for the slaveholding class and for all free people who enjoyed the bounty of the slave society." 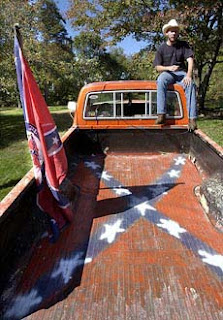 And even with "Southern pride and heritage and a reminder of their fallen soldiers" -- this flag stands for much more than that. It stands for everything we've worked so hard to overcome. It symbolizes slavery, white supremacy hate groups and racism. There are many people who still live in the past, holding up their Confederate battle flag or throwing one up on the back of their old pick up truck. It absolutely is imperative to remove this flag from governmental buildings and in public places in general. But it is also equally important to preserve this time in history for learning and education. Some say the Confederate battle flag should only be seen in museums, and I wholeheartedly agree with that.

Let me ask you something...

When you think of "good fortune" and "well-being", what comes to mind? 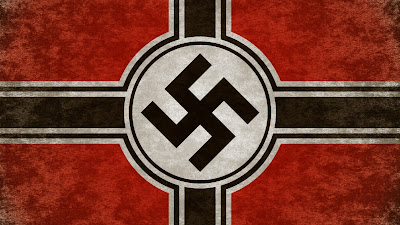 The definition of those descriptions were all of what symbolized the swastika 5,000 years before Adolf Hitler designed the Nazi flag. In the United States Holocaust Museum, it states this: "The motif (a hooked cross) appears to have first been used in Neolithic Eurasia, perhaps representing the movement of the sun through the sky. To this day it is a sacred symbol in Hinduism, Buddhism, Jainism, and Odinism. It is a common sight on temples or houses in India or Indonesia. Swastikas also have an ancient history in Europe, appearing on artifacts from pre-Christian European cultures. The symbol experienced a resurgence in the late nineteenth century, following extensive archeological work such as that of the famous archeologist Heinrich Schliemann. Schliemann discovered the hooked cross on the site of ancient Troy. He connected it with similar shapes found on pottery in Germany and speculated that it was a 'significant religious symbol of our remote ancestors.' In the beginning of the twentieth century the swastika was widely used in Europe. It had numerous meanings, the most common being a symbol of good luck and auspiciousness. However, the work of Schliemann soon was taken up by völkisch movements, for whom the swastika was a symbol of “Aryan identity” and German nationalist pride."

I guess you can see where I'm going with this. The swastika was a positive symbol historically speaking. It is also a symbol of the most horrifying act that has ever took place: the Holocaust. It symbolizes antisemitism, hatred and murder. There is zero tolerance for a swastika to be placed anywhere. So why are some people so adamant about placing the Confederate battle flag up in public? This should have been removed years ago. Unfortunately, it took one heinous crime to open the eyes of many people who were immune to the meaning of this flag -- the real meaning of what it really stands for. I doubt you would ever see an African-American holding this flag up. Hey, it's part of their history too, but it's a grim reminder of what the South initially wanted: slavery. 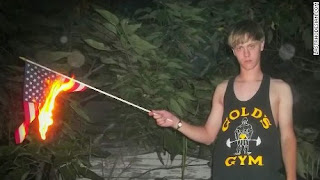 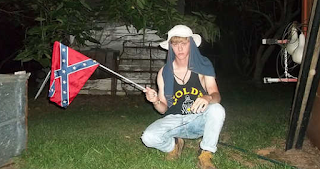 I usually don't dabble in these types of politics, but wha struck me was the tolerance of the racist flag that's been held up for so long. What really upsets me are people who actively stand behind the Confederate battle flag, saying it was just about preserving their heritage and remembering fallen soldiers -- that's all. They want to forget because deep down, they are aware of the atrocities that have taken place. They are aware, that somewhere underneath it all of their excuses, there is some level of bigotry and hatred without having to say it. What type of people do you typically see holding up the flag or has one up on their house, truck or even their lawn? Think. Who held up this flag before shooting innocent black people in a church? Dylan Roof had no qualms about his "Southern pride" and burning up the American flag.

I think as much as we would like to "preserve heritage" -- we also have to preserve respect for one another and realize that there are people who feel hurt when looking at these symbols, and rightfully so.

For more of Deb's articles, please visit: www.debrapasquella.com or join her on Facebook and Twitter. Check out her cooking blog for some of her famous recipes!
at June 26, 2015