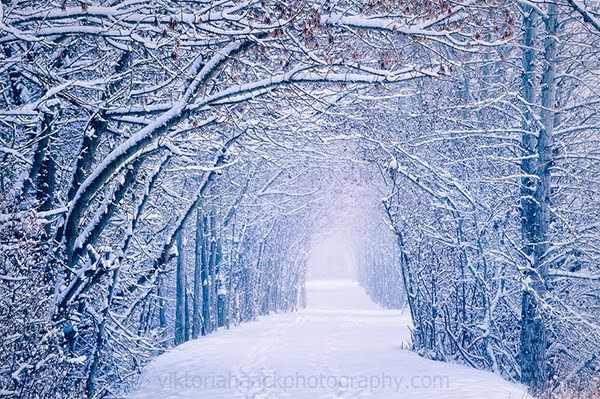 Last night I truly thought I was going to have a hard time going to sleep due to the myoclonic jerks I've been experiencing. Oddly enough, I felt calm, but I had one wicked migraine. On top of that, I had the worst heartburn imaginable, so I couldn't take my Advil due to my tummy issues. I left the bedroom around 11pm. I didn't want to disturb Madelene. I went into the living room, turned off all the lights and kept the outside lights on. I watched the snow come down as it covered all the neighboring trees. It was amazingly bright and so beautiful. I had a cold compress on my head, trying to relieve my migraine naturally. I started to get anxiety, thinking, "What if I don't sleep tonight?" Then, memories from when I was 8 years old came flying through my mind so vividly. I remember it was a beautiful snowy morning, but I couldn't get to the bus stop because the private road on the mountain that we lived on was too icy. Dad decided to drive me into school. We slowly drove through a tunnel of beautiful crystalized trees that radiated rainbows onto the road before us due to its prism effect. The sun was shining and the entire road looked like a winter wonderland. It was the most beautiful scene that I could remember as a kid. I was awed by the spectacular colors and icy crystals that hung low, brushing part of our truck as we drove through. I felt safe because Dad was driving me. I felt happy because it gave me this euphoric feeling -- like wow -- this is a gorgeous day! That feeling, and those memories put me right to sleep. No jolts. No seizures. No anxiety.

The winters were always a huge task, but they were fun and we looked forward to the 'after duties' having hot coffee while sitting by the fire to warm up our frost bitten toes.

This morning, I really didn't expect an amazing wintery scene as I noticed when I walked outside. It gave me another feeling of happiness, even though I was really sick of last year's snowfall amounts. My point is, the visualization that I had last night gave me such an amazing feeling of peace, that it led me to fall asleep without any problems. In a very small way, I kind of doubted visualization techniques, because it wasn't "enough". I needed more to calm my anxiety. I've always felt safe when it snowed. We had our father who plowed us out and made our roads perfect. He chopped wood, brought it in the house and made sure we were supplied with all the necessities that were needed. He was a caretaker and made sure his family was safe and sound. Even at my old apartment, he would chop wood for us, making sure our little place had enough heat God forbid the electric went out. He did that for my sisters as well even when we were all living different places. Dad was the master of keeping everything and everyone in tact and safe. We never worried...until he went into heaven...at least for me.

With winter approaching us, I'm starting to get a little scared of all the downfalls of this beautiful season. Last year, we had over three feet of snow on top of our flat roof. The roof and ceilings were making "popping" sounds and one which woke me up at 4am. It had a grinding sound, as if one of the beams were being pushed beyond its limits. That's when I called a guy to come clean my roof off. I was told not to do this because it was a flat roof, and they can potentially make holes while walking on top of it. It can't be just raked down like normal houses. But they do these jobs all the time for commercial buildings and I couldn't risk the potential dangers of water leaking into the electric, nor the chance of the entire roof collapsing. As I watched the news, there were more than a dozen roofs in our area that had collapsed due to the heavy snow. I wasn't taking a chance, so we flung an emergency $500 dollars to some guy and his friend to chisel the 3 feet of icy snow off from our roof. It was well worth it. Those guys came at 3pm in the afternoon and left at 11pm at night. We had to get more lights for them so they could continue working. They did an amazing job. I'm just dreading this happening again.
Enjoy your weekend of your first snowfall, New York!

For more of Deb's articles, please visit: www.debrapasquella.com or join her on Facebook and Twitter. Check out her cooking blog for some of her famous recipes!
New York snow winter