I Hurt You Because I Loved You 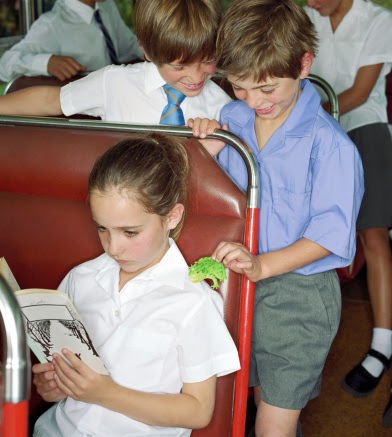 A long time ago when I was around 11 years old, I had this boy named "Mikey" on my bus ride home from school, taunting me and pulling my book bag straps. He wouldn't stop. I was fuming, but also at the verge of crying too. I really couldn't figure out his motive, but in my mind, I plotted and schemed his impending demise, because his stop also happened to be my stop. I made sure to get off the bus before him, so I could sucker punch him right in the face. And I did. This was totally out of character for me - I wasn't a bully or retaliated so violently before, but this time was different. He fell down, but quickly got right back up. My mother was at the bus stop waiting for me, holding her face screaming, "Stop!" He ran up to me and hit me right in the head, as I kept punching him, left-right-left-right. I was so angry that I started to pick up a ton of shale that was on the driveway and started throwing stones at him. Talk about barbaric. The kid ran down the street so fast, that I never really knew what exactly happened.

Facebook is wonderful for reuniting with friends and well, 'thought-to-be-friends'. "Mikey" contacted me through Facebook. He said, "You look beautiful, how've you been?" I immediately thought he may have mistaken me for somebody else, because back in grammar school, I was a tomboy with messy hair and boy's clothes, aside from us being complete enemies. I was awkward and a bit of a misfit. I always thought that was the reason why he was taunting me that day on the bus.

"I just wanted to let you know that I always had a crush on you in school."

I asked about the incident that never left my mind and he responded with, "Didn't you know I did that because I liked you?" And then everything - all the memories after that started to make a lot of sense. Isn't it funny how kids are? How about adults? Why do you think adults play "hard to get" with the ones they want to get? It doesn't make sense, but the psychology behind it does. I also wonder if the same psychological madness applies to those who hurt the ones they love the most? Why do some people feel the need to verbally attack or put down their loved ones, whether the heat of the moment some twisted form of raising their self-esteem by putting someone else down? This can even apply or 'should' apply to physical abuse. Why would you hit the one you love? It just doesn't make sense to me, and yet it does. I know I can be one cranky sonnuvabitch sometimes when my wife doesn't "get me" or understand why I'm having 'this' problem or 'that' problem. Maybe it's the passion behind the friction that makes it blow up even more so, or maybe it's the frustration of someone who is supposed to know you inside and out who fails to understand you. I'm not really sure. Maybe that old saying is true - that there's a fine like between love and hate. You not only have to love your significant other, but you also have to like them. If you don't like who you're with, the love will definitely fade or turn rancid.

Friendships can be quite volatile as well. I've met a few people who seemed to have it in for me. For example, a friend who constantly insults you or criticizes every single thing you do - what's the point? If you're going to be platonic friends, why would you be so critical and insulting? Those are the types of people I don't need in my life. I criticize myself enough as it is. I don't need negative people to bring me down, so why in the world would I want them in my life as a friend? That's not a friend. And I totally understand constructive criticism as far as trying to help or guide you in some way so that your life would improve for the better. And mind you - that better be a longtime best friend of yours for them to even go there. Regardless, we should be more accepting, less insulting and try to seek out a commonality that binds the friendship, not tears it apart.

So whether speaking platonically or intimately, why do some people choose the harder road? Why do they like to test the waters so to speak? Why on earth would someone want to hurt someone they love? And this 'hard-to-get' strategy - does that even work? Has it ever worked? Or is it one big myth? Do we want what we can't have? And if so, why would we want to be with someone who clearly doesn't want to be with us? Is it that our hearts don't know better, or do we just want to challenge ourselves on a whole new emotional level? What do you think?

For more of Deb's articles, please visit: www.debrapasquella.com or join her on Facebook and Twitter. Check out her cooking blog for some of her famous recipes!
abusive relationships hurtful words love one another playing hard to get relationships verbal abuse