Is There Ever a Good Time to Lie? 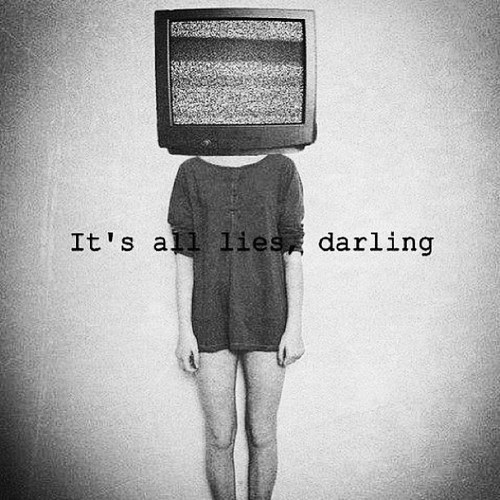 Lies come in all shapes and forms, but nonetheless, they're still lies. If someone omits a portion of the story, is that considered a lie? How about if someone exaggerates a story to look more "entertaining" -- would that be considered an all out lie? I'm sure every single one of us has lied in the past, or still lying in the present, whether reasons for getting out of trouble or just trying to hide certain facts that you don't necessarily want revealed. Some are considered "white lies" while others are just downright dirty lies. I read somewhere that toddlers begin to lie at age 2, which seems way too young in my opinion. 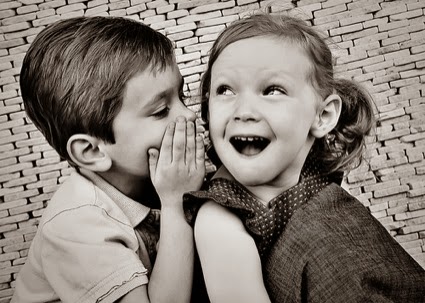 Have you ever met someone who begged for attention all the time? They're the "storytellers" -- the ones who get people gasping from the shocking news they were told and "wowing" others with juicy gossip.  I'll never forget this kid at school. He always had these incredible stories -- everyone was gathered around him like kids around a campfire. We couldn't believe all this kid had seen and all he had went through and of course, all that he knew about other kids. He always started his stories off with raised eyebrows and his hand cupping his mouth as if he were about to tell a dark secret. Then he'd proceed: "Didja' hear about…"  And of course, nobody did.

I recently heard a "far-fetched" story that was confirmed false after running into one of the people involved in the tale. The funny part is, I knew it was a super exaggerated story because this person has told a ton of them before. For whatever reason, I always need to confirm them because I can't get over -- or better yet, I can't understand why she feels the need to tell such outrageous tales. It's not even harmful accusations made - they're just completely false stories. I always question the mental stability and of course, if there are any "tales" about me out there.

People love to hear a good story, but the majority of people don't want to be lied to. I remember this woman who frequents our local bar got so upset with me one day because she accused me of lying to her. This bar is generally a "straight bar", so I don't typically tell people I'm a lesbian unless asked. So one night, as a bunch of us were sitting at the bar, she asked us, "So are you two married? I see you both have rings on." I told her yes and so did Madelene. I just didn't tell her we were married to each other. Now, whether omitting that fact was a lie or not, in my own defense, there were a lot of - how shall I say - rednecks surrounding the general area where we were talking. You either get an all out negative response (sometimes religious rebukes) or you get the ones who look over their draft beer and slur out, "Can I watch?"  So for our own safety, I omitted. Yes, I lied. 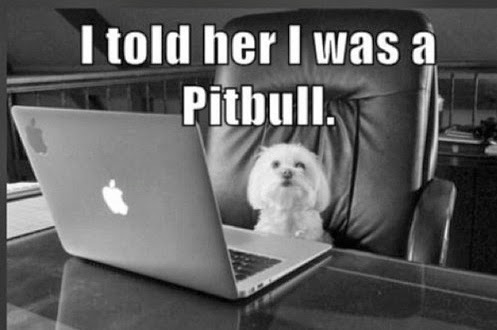 This story is a very interesting one. A good friend of mine got catfished a few years back. She was on Match.com and found someone who had all of her "must haves" in check: from looks, height (she was very adamant on height since she is 5'9), weight, career and interests. After they connected on Match, they started talking on the phone and chatting online on a daily basis. In fact, she fell in love with him before she even met him. They lived about two states away which is why they waited to meet. He was a very busy man and his career took most of his time, so he always made promises such as, "After this month, I hope to come down and visit you." One month turned into two, turned into three and so on, but my friend was just still gaga over him. During a conversation with her, I had asked her if she Skypes with him at all -- or ever spoke to him through a video like FaceTime or any other sources. She said, "No." She only had seen photos and spent long hours chitchatting (and whatever) on the phone. They were "Facebook friends", but his account was very limited, probably due to keeping her on the "restricted list of friends". in this day of age, you don't just chitchat with a photo. I'm sorry --- you must video chat before meeting. That's just something I don't understand and don't trust. Well it wasn't too soon before a friend of his tagged him in a picture at a birthday party on Facebook. (Good 'ol Facebook to the rescue.) I guess he failed to block tagged photos. 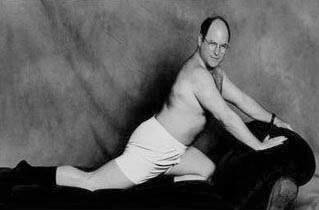 She asked me, "What should I do? I think it's him, but he looks like George Costanza from Seinfeld! There are people all around him though."

"Look at what he's wearing. Does he have a watch? Is he wearing anything special that you can note other than some strange Hawaiian shirt?"

"Yes! He's actually wearing a silver watch with a blue face on it!"

"Tell him your friend works for some watch company, and she had a leftover expensive silver watch with a blue face on it and if he would like to have it. Wait for his reply. If he says, 'Oh I have one just like that!', then he's your guy."

And so…he was. She was even brave enough to push it to the limits and asked him if he owned a light blue button down shirt with a white collar, because she loved those types of custom made shirts. Well it so happened that he had one. She then called him out on the photo and said, "I love the photo of you and your friends at the birthday party!" As relieved as he sounded over the phone, he then said, "Yeah, that's me! I didn't have recent pics to use on my profile." My friend decided to never speak to him again after that. Was it shallow of her? Do you think she should have reconsidered meeting him? He was the total opposite of his photos, in fact, she's even sure that the person in the photos were not him at all.

I'm not sure which type of lie is worse: omitting, the self-defense lie or the exaggerated tale. Do you think one or all of the above insults your intelligence? Would you call the person out on their bullshit or would you just let it go in one ear and out the other?

EDIT: My mom called me after reading this post and said, "Deb, I have a letter you wrote me when you were a little girl. You apologized for lying." (Photo below.)  I guess I'm a liar just like the rest of them. Sorry Mama! 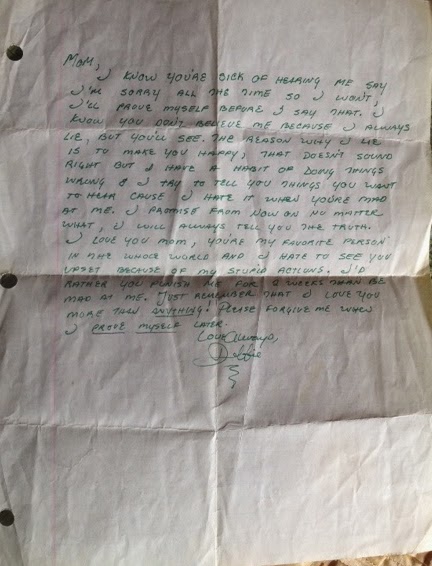 For more of Deb's articles, please visit: www.debrapasquella.com or join her on Facebook and Twitter. Check out her cooking blog for some of her famous recipes!
at March 14, 2014