- February 06, 2014
You may not know him, as most do not. He’s this young Christian rapper named, Mark Felder who goes by the name "Bizzle" who did a rendition of Macklemore and Ryan Lewis’ “Same Love” song. He claims in his lyrics “filled with love” that gays and lesbians were never oppressed and that we oppressed ourselves in our own sin. So not only is he defining his own beliefs and bashing others with his religious propaganda, but he is being quite discriminatory for someone who is black.

And I feel so disrespected that you were so desperate
You would compare your sexual habits to my skin (What?!?)
Calling it the new black
Tell me where they do that
They hung us like tree ornaments, where were you at?
They burned us for entertainment, you go through that?
Mom's raped in front of they kids, while they shoot dad
Ever been murdered just for trying to learn how to read bro? (Nope.)
A show of hands?
I didn't think so
So, quit comparing the two.
It ain't the same fight
You can play straight.
We can never play white
Using black people as pawns for yo' agenda
And these sell out rappers will do whatever you tell em'
Skirts on stages, campaigning for that black vote
Afraid to be blackballed, so they play that role
You were never oppressed, the devil was a liar
The only thing oppressed was yo sexual desire
Keeping yo' desires oppressed is so lame to you
But when you get married, that's what you expect yo' mate to do
It angers you, if I compare you to a pedophile
Cuz' he sick, right?
And you're better how?

Let me just just direct this to Mark for now and remind him of a few things after his comment, or “lyric” about how his people were hung like tree ornaments and mothers raped in front of their kids while they shot dad. While I sympathize with the horrific tragedies of his ancestors, I also wish he would put himself in our shoes, the LGBT community's shoes to see just how we're treated. It's something Jesus would never do and never approve of. Even if homosexuality is a sin, isn't murdering and raping someone a sin as well? Does he think those sins are equal or are all sins the same? Remember, murdering someone made it on the Top Ten Commandments. Homosexuality didn't as well as no mention of Jesus stating anything about it.

October 8th, 1998, Matthew Shepard met his friend Aaron Mckinney and Russell Henderson at a lounge in Laramie, Wyoming. His friends were going to give Matthew a ride home. Instead, they drove to a remote, rural area and proceeded to rob, pistol-whip and torture Matthew, tying him to a fence and leaving him to die all because he was gay. Tied to a fence, Matthew was discovered 18 hours later in a coma by a gentleman who mistook Matthew for a scarecrow.

So Mark, where were you at? Too busy reading your Bible?

What about people who are transgender? Do you think God hates them too? During a Christmas Eve party, two guys grabbed Teena and forced ‘him’ to remove his pants, proving that Teena was anatomically a female. The two men assaulted Teena and forced him into a car. They drove to an area by a meat-packing plant in Richardson County, where they assaulted and raped ‘him’. Yes, did you read that --- they raped “him”, to which anatomically he was a “she”. Teena was later shot in front of her friend’s toddler.

So Mark, where were you at?

I gave you the most popular of all stories relating to LGBT hate crimes, but if you dare to Google and open your mind and that religious heart of yours, you’ll see that the LGBT hate crime here in the U.S. and many other countries are vast and frequent. My whole point about people getting so offended by race, sexual orientation, sexual identity and religion is absolutely pointless in the big scheme of things. You’ll see that we’re all “oppressed” in some way or another. Maybe it’s because we’re black, we’re white, we’re gay, we’re transgender or maybe, we let “oppression” get to us due to what has taken place in the past. You call being a homosexuality “sexual habits”? Well what about your sexual habits? Let’s start there. Do you think all heterosexuals are practicing “good sexual habits”? Is it moral? Have you ever had premarital sex? Oh, because you’re straight, that makes it okay? Read more of that big Bible of yours. When people immediately point out sexual aspects of the LGBT community and never pointing out the relationship, the bond, the LOVE of two people who are a family unit, that tells me something about their small minded ignorance.

“Using black people as pawns for yo’ agenda.” Really? And what’s our agenda? To love one another and have equal rights, just like your ancestors wanted years ago? And yes I will compare it to yo’ skin color because due to yo’ skin color, you were not able to marry another person of a different race. And how dare you compare the LGBT community to pedophilia. That’s rape, plain and simple. But someone as uneducated as you seem, yo’ --- makes a whole lotta’ sense now. So I hope all the people listening to your music which doesn’t represent God in the least, understands the lack of intelligence and the abundance of ghetto lingo that's involved in your motives, whatever they are. Perhaps you're homophobic because you're in the closet yourself? How does it feel to be judged? What --- you gonna say it’s because of your environment that makes you speak ghetto slang? Try again. Or maybe you think that's "racist" of me? The word "ghetto" refers to both black and white people who live in poor demographics who do not have a good opportunity to get a decent education.

I also want to commend you for reading the bible (to the best of your ability). Maybe you need a little refresher though. Let's flip to Leviticus 25:44-46, shall we? 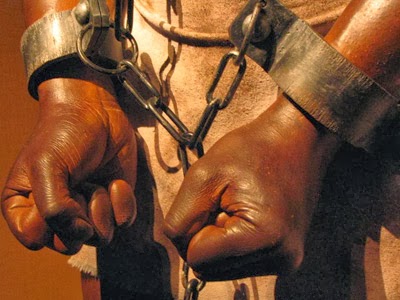 "As for your male and female slaves whom you may have: you may buy male and female slaves from among the nations that are around you. You may also buy from among strangers who sojourn with you and their clans that are with you, who  have been born in your land, and they may be you property. You may bequeath them to your sons after you to inherit as a possession forever."

Let's switch it over to Exodus 21:20-21 "When a man strikes his slave, male or female, with a rod and the slave dies under his hand, he shall be avenged. But if the slave survives a day or two, he is not to be avenged, for the slave is his money." (Lucky for the white man, huh? We can torture slaves but slapped on the wrist if we kill them.)

Oh, turn to Ephesians 6:5 please. "Slaves, obey your earthly masters with fear and trembling, with a sincere heart, as you would with CHRIST." ----Now can you believe that the white man is equal with Christ? Hmm.

Colossians 3:22 "Slaves, obey in everything those who are your earthly masters, not by way of eye-service, as people-pleasers, but with sincerity of heart, fearing the Lord." ----Wow.

I think you get my point. There are a ton of other scriptures in your Bible about how slavery was perfectly fine. I want to even state that there are more references to encouraging slavery than there is about homosexuality. If you haven't read Leviticus to the fullest, it does say that homosexuality is a sin. However, if so, then so is eating shellfish, or shaving your beard and even getting a tattoo. In Galatians, it clearly states that the old law was abolished once Jesus died upon the cross. Any other reference to homosexuality, like in Corinthians as well as Romans are all referenced about reckless sex whether heterosexual or homosexual. 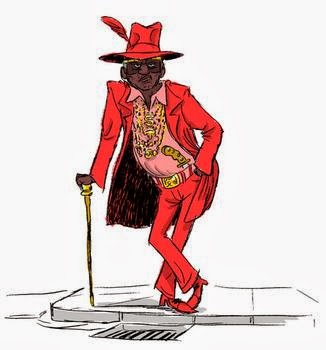 As for your own rap sheet, it reads, "Mark Felder (Bizzle) once sold drugs in exchange for money and even became a pimp, exploiting women for his own financial gain. In a previous article, the rapper stated 'My financial situation got so bad. I was sleeping on a friend's floor and my car was a closet for my clothes'". Sounds like you had your own crosses to bear, but intentional ones that eventually hurt others for your gain. Yes, of course, you repented, right? But those are intentional evil spirited actions --- being gay or lesbian is not intentional, it's natural. You should really remember where you came from before judging others. "Money Before God" ---???  Right.
You have a big platform to spread some awesome messages and become great, but instead, your 15 minutes of fame is fading out fast, because nobody wants to hear that kind of crap. That's like the pot calling the kettle….well you get the gist. You're not only hypocritical, but your judgmental messages are so dangerous to our young kids going to school right now. Have you seen the news? Do you read articles about bullies tormenting those they "think" are gay or kids who have come out of the closet and committed suicide over the constant bullying? Do you think these kids wanted to commit suicide and do you just write them off because well, suicide is a "sin"? "Well they deserve it" type of mindset is really sad, Mark. I do have to say, that I cannot wait until you reach the gates of heaven and God comes to you and says, "I never knew you."  Remember, just like in your lyrics, the devil is a liar. Open your heart, open your mind and forgive those who you may think are "sinning". In fact, pray for those who you think aren't going to make it into heaven instead of bashing them and making them feel bad about themselves. I don't have an "agenda". I've been with my partner for 20 years and we have been married for 4. She's my family unit. She is my life partner in life and my best friend. I know a ton of heterosexual marriages that have fallen apart and remarried quite a few times. Doesn't it say somewhere in the Bible that a person shall not marry again if their ex husband or wife is still alive? It's called "adultery", and well, last I read, adultery made it in the Top Ten Commandments. Homosexuality didn't.

Look around you. I'll even let you be the judge.