Richard Sherman said it right: "There's no need to be a barbaric human being, but on the field, we're playing a very barbaric sport, you can do what you please." I've had my fill of all the haters bashing Richard Sherman left and right, when in fact, most of these people ranting about how "classless" Sherman was, have all had their share of outbursts one time or another. Emotions are a funny thing. Once you've already established tension with someone, and that opportunity arises where you can just release all that anger and hopefully, in a healthy way --- that's what makes us human. Of course, our actions speak volumes about our character, however I don't believe what Richard Sherman did was such an abomination. He managed to make a touchdown right over his enemy. The emotion that came over him was more excitement, satisfaction and a final outlet for all of his pent up emotions. Even the reporter who was taken aback wasn't frightened in any way. In fact, she said, "Finally, he showed some emotion!" People who personally know Sherman say he is such an awesome guy in real life. He's just very passionate about his career, about this sport and about winning this for his team.  He even stated, "You know, I don't mean to attack him. And that was immature and I probably shouldn't have done that. I regret doing that." To Sherman: Don't apologize. To apologize for the public and for the team, fine, I get it, but I saw nothing wrong with it. What I found horrifying were all the racist comments from the haters who tweeted their little hearts out, while Martin Luther King Day was approaching us. 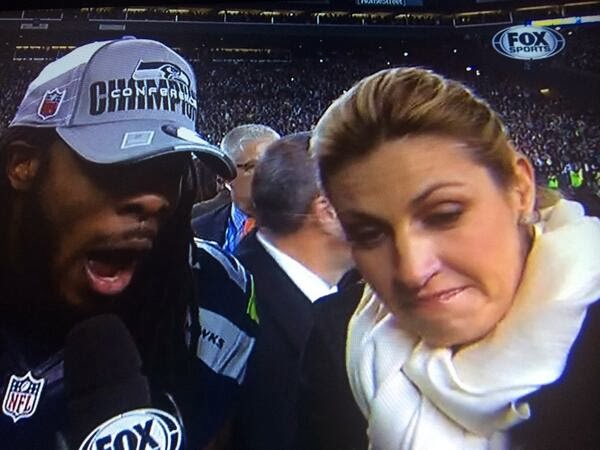 Anger makes us so ugly, doesn't it? I know it does for me when I come out of my face about something. I usually say things I don't mean out of anger and usually end up hurting the ones I love. It's a senseless release of emotion, sometimes not having anything to do with what's really bothering me. It's somehow a facade -- making the insults untrue, but the anger as honest as anything. We sometimes act out of character, as I've heard from many people talking about Richard Sherman, "He's usually a very calm and peaceful guy." Sometimes, it doesn't make any sense at all. We all have our moments of insanity. While watching Richard's short interview after the game, I thought, "Wow, that's a whole lotta' passion behind his love for the sport." And while he was directing his anger toward Crabtree, let's just call it what it is: fired up emotions after a barbaric event. Before you judge him, think about an outburst that you've regretted in the past. Then go right ahead and make your remarks, hopefully not racial ones. Now THAT'S "classless".

For more of Deb's articles, please visit: www.debrapasquella.com or join her on Facebook and Twitter. Check out her cooking blog for some of her famous recipes!
anger emotions football forgiveness let it go Richard Sherman Seattle Seahawks Super Bowl