Why You Should Start Blogging 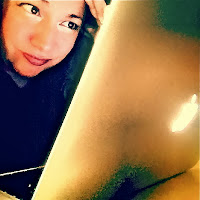 So I'll admit, most of my posts nonsensical. I have a million and one fluff pieces to dish out so bear with me. I never said I was a journalist, so just keep that in mind. Also it's Saturday and I'm in my pajamas still and of course…I'm a blogger. I. am. a. blogger. Even with that being said, I have received quite a few emails regarding a few of my posts where people were so outraged over my opinion. Who really cares what I have to say? But hey, it stirred the pot and if people are outraged by your content, then you must be doing something right.  It's my nonsensical opinion as a blogger. The art of blogging is so lost. So many of my blogging buddies have either deleted their accounts or have just let their blogs float away out into cyberspace somewhere. A lot of the opinionated bloggers, such as myself can easily received more than their share of hate emails per day. I try to limit my 'piss you off' posts the best I can. At times, it's great to have this blog in case I feel I've been wronged in some way, or even harassed. I will 'out' that person and their full name which goes onto Google, which is then forever tarnished. I always tell them in advance, "If you keep it up, I will post everything you write onto my blog which will then ruin whatever reputation you have." They usually say, "Go 'head with your little blog." Weeks later they are begging me to take it down, but by that time, the search engines and web crawlers have eaten it up to the point of no return. So be careful and be sure you definitely want "this" going out into cyberspace. Once it's up -- it's up forever. Blogs are a great tool for getting the info you want 'out there' --- and if you have a good ranking, boy does that info spread like wildfire. I really think everyone should have a blog just for the purposes of speaking your mind -- and sometimes, don't you just want to scream it out to the rest of the world, whether good or bad? The art of microblogging like, Twitter and Facebook has become more of a rage than anything else. People are receiving and putting out information so fast that it'll make your head spin. So why read a two to three paragraph blog post? There's so much to say and not enough room on Twitter other than its 140 character limit. They have "Twitlonger" where you can basically…blog it. What's the point? And if you write too much on Facebook, people are annoyed. 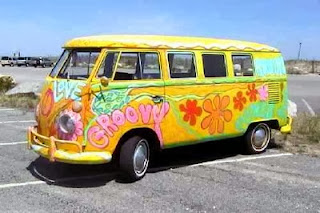 Not only is blogging a great outlet even if you wanna do a great fluff piece about whatever it is that's on your mind, but it's also a great way to reveal your political or religious beliefs without forcing them upon your "friends" on Facebook. They choose to go to your blog so if they disagree, they can just "X" right out of it. I always suggest to people to have a blog. One night while talking with a friend at TGIF's bar, she was telling me these awesome stories about her family life, especially her eccentric mother who drove one of those 1970's Volkswagen vans around protesting in every political event with a tambourine in one hand and a joint in another. She even had tons of photos and videos of this as well.  She seemed to be quite whimsical in many ways. Whenever I would hear one of her childhood stories that included her mother, in my mind, it played out like a movie. In fact, I think it should be made into a movie. (Sometimes that can get a bit touchy when you write a blog or screenplay regarding your family.) But I thought it would have been such an awesome idea to put her thoughts and stories down onto a blog, even throwing out some videos of the past to give the reader a real feel for a life she once had. I just saw such potential for greatness there, but she wasn't comfortable enough to do it, which is fine. You have to be 100% comfortable to write about a topic that is very meaningful to your heart. Understandable. But wow, I would have been an avid reader if she would have went through with it. I love hearing about people's family lives and the way they grew up, especially if the parents were hippies or they had some sort of wild life in their past that they can now appreciate as conservative adults. It makes it so entertaining. And that shouldn't be read as an insult whatsoever. 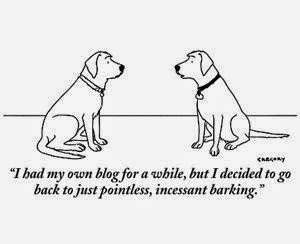 So if you're one of those types who are contemplating starting a blog, but afraid that you'll be judged up and down for it --- remember this --- you're giving insight to yourself and your opinions about the world. You're giving yourself a voice. You're making up your mind and posting articles about whatever it is you want. And trust me -- they'll read it. Do you have a strong opinion about the government? Are you a conspiracy theorist? Do you have strong convictions in your religion? Do you have a enormous amounts of opinions when it come sot our POTUS? Tell us. Are you afraid that your boss will read it? Go anonymous like most bloggers do. Make up a fake name. Go for it. Sometimes, YOUR opinion can sway other people's opinions. I'm not saying that it happens all the time, and that's not why you want to blog, but for me, I have read blogs where I did more research about a 'once opposing' opinion. I happily changed my mind over the proof and facts that this one blogger put out there so beautifully. You have influence. You have a mind, thoughts, heart and the ability to write it all out. Who has the time to blog, right? Do it at your pace. Plop the link up on Facebook and if people are truly interested, you'll see the results. Build it, and they will come. And that's my nonsensical thought for this beautiful Saturday afternoon. Enjoy the rest of your weekend!

For more of Deb's articles, please visit: www.debrapasquella.com or join her on Facebook and Twitter. Check out her cooking blog for some of her famous recipes!
blogging facebook microblogging social networking the lost art of blogging Twitter why you should blog