Dining Etiquette? Does it Exist? 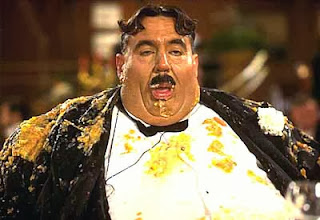 The other day Madelene and I stopped off at this restaurant and bar to have a glass of wine. I was having some sort of anxiety attack, so we stopped in just for a bit. It had to be almost dinner time and the restaurant was preparing for its normal crowd to come flooding in. We sat at the bar and decided to also have an appetizer. Maybe it's because I don't pay attention enough or maybe it's just that people sometimes annoy the hell out of me, but this man sitting near us was eating his late lunch/early dinner, but so loudly that I wanted to vomit. From slurping, to smacking his lips and even grunting while shoveling a pile of mashed potatoes into his mouth. He was also eating a lot of his food with his bare hands getting gravy all over his shirt. At the end of his dinner, he was scraping his plate so loudly that I shot him a look. It was like scratching nails on a chalkboard. I'm thinking to myself, does he even know how rude he's being or am I just overly sensitive? I saw the bartender shoot him a look and then smirked while glancing over at us. That just confirmed I wasn't the only one hearing this disgustingness. I know we all have our pet peeves, but when does it come down to the obvious dining etiquette to downright nastiness, especially when you're going to be around strangers? Bad enough if you know them because you really can't say anything. Either way -- whaddya' gonna say? "STOP!" 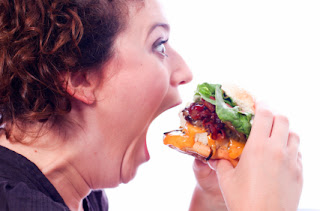 Years ago, I was dining with a bunch of coworkers when I worked at this company over in New Jersey. We all went out to a retirement luncheon. I had to sit next to my supervisor who was quite large - talking 350 + lbs with a bad case of alopecia. She had curly hair that only grew on the sides of her head -- like Bozo the clown. I only describe her (to a tee) like this because she was a very mean person. And I mean, MEAN. I could have toned down my description, but the truth was, she was a beast --- more so personality-wise. Anyway, when it was time for our soup, I cannot tell you how mortified I was when I heard my boss slurp every spoonful in. It was so loud and obnoxious that I was literally pulling my hair to make myself stop paying attention to it. But now I was totally focused on her to where I couldn't even pay attention to whatever conversation was being had. I know the others heard it too, because you could have heard the slurping from the other side of the restaurant. It was my first time sitting next to her at a luncheon or dinner. I never saw her eat. When the main course came, she had this urge to want to make a speech with a huge mouthful of her crab cake sandwich. She had so much food in her mouth that her voice was muffled and unable to pronounce a goddamn word. At one point, pieces of crab cake were making its way out of the corners of her mouth, and that's when I just had to turn around start giggling. I couldn't take it anymore - I could not hold it in any longer!  One of my friends glanced over at me, and then she bursted out laughing. It trickled over to everyone and finally, my boss said, "Did I say something funny?" She looked at her blouse as if something spilled on her, but it wasn't that --- it was because she had crab cake crusted lips. 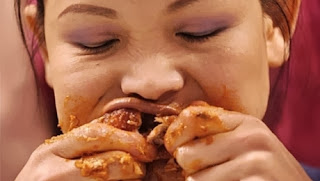 Typically, I don't say a lot about all the dining pet peeves that get me boiling, because people will tend to be a lot more cautious around me. And believe me, last night while I was out to dinner, I got a little sauce onto my scarf --- so I'm not perfect either. But there's a fine line between accidents and just plain rudeness. From watching a girl eat saucy hot wings and licking her fingers and then wanting to shake hands with me to someone literally spitting out crab cakes with each word --- something's gotta give. I remember Mom always telling me to eat with my mouth closed. I learned that it was rude to talk with food in your mouth, which is why I take the smallest of bites. Some even make fun of me because I eat way too slow, whereas one person is completely done with their meal, while I'm on my second bite. I don't go to movies because I cannot stand people fussing with their crinkly bags of candy and rummaging through a humungous bucket of popcorn…and of course, the inevitable crunching while I'm trying to focus on the movie. Let's not forget when they finish the end of their big gulp sodas. I. just. can't.

For more of Deb's articles, please visit: www.debrapasquella.com or join her on Facebook and Twitter. Check out her cooking blog for some of her famous recipes!
dining etiquette disgusting habits messy people rude people social etiquette talking with your mouth full