- November 20, 2013
Without a rebuttal from my better half, because (fortunately), she doesn't have access to blogs or social media at work, I am pleased forced to post a part II on her. Yesterday, as I was reading a fellow blogger named Katy go on about her grandmother and how she feels the government is out to get her, I shared my story telling her about Madelene and how paranoid she is - conspiracy-theory-paranoid about the government. I'll start with the other night while I was preparing dinner. I was washing something in the sink. We have this huge window overlooking the wooded area outside, and now that it gets dark around 4:30, it was pitch black. I turned the shade down and said, "Ugh, feels like I'm being watched for some reason," in reference of not being able to see outside. I always get that feeling if I can't see beyond a certain distance. Mad quickly turns around and says, "You are." All you hear is a "ka-plank" from me dropping a dish in the sink and me yelling, "What? By who?" I seriously thought she was about to tell me she caught my neighbor snooping, but it was worse.
"Do you know they have flies and mosquitos that are actually drones from the government? They can watch every move you make? They can be out there right now."
"Mad! Stop!"
"Why do you think they're launching all those satellites up into space? That's not for space exploration! That's to watch us down here like Google Earth."
Don't get me wrong, I totally believe in quite a few conspiracy theories, but this one takes the cake. I wasn't ready for that 'heavy' response right after a nice glass of wine. I mean, who the hell would wanna watch me for the love of God? Knock yourselves out. You'll be asleep in no time. 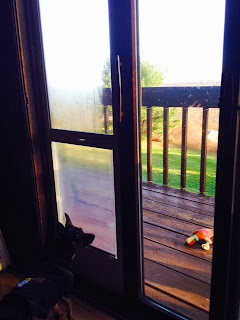 This morning I hear, "I'm gonna get you back for writing about me! You just wait!" So she is insistent on writing her pet peeves about me pretty soon. But for now, let me go on and on…about her. I have this studio/office set up that's located on our second floor. The bathroom is on the other side of the room, however when Madelene takes her shower, she prefers to shower with the door wide open, leaving the doggy door window all fogged up and part of my laptop screen with a little mist on it. (Which happens to be no bueno for computers!) I keep telling her, "Please shut the door because the moisture is going to wreck my new computer." This morning, same thing. By the time I get to shower up, I see circle marks all over the mirror with little tiny dots of tissue paper sticking to it. She has no clue that it leaves a complete mess by the time she leaves here. She then keeps the crinkled up paper towel on the side of the sink, as if she's going to use it another time. My OCD kicks in because it's a used paper towel. I pick it up with another tissue and throw it out. I have no idea.

Almost every single morning, Madelene seems to have forgotten something upstairs. That's okay, I can totally understand that since I've been finding myself walking into rooms lately not knowing what I came in there for --- so I'm cool with it. But now, it's quite different. She goes downstairs to the second bathroom so she can shower in her cologne before going to work. But the thing is, she is not allowed back upstairs once she puts that crap on. It smells like bug spray. So every morning, I ask, "Did you forget anything up here before you go downstairs to take your PR shower?" And she laughs and says, "No, thank you very much," in her sarcastic tone. But two minutes later, I hear her creeping up into my office area. Not even seconds later, the entire upstairs is fumigated with bug spray cologne. Here's a video to prove how much cologne she uses.

So I wait…for her rebuttal.

For more of Deb's articles, please visit: www.debrapasquella.com or join her on Facebook and Twitter. Check out her cooking blog for some of her famous recipes!
colognes divorce grounds for divorce idiosyncrasies marriages relationships