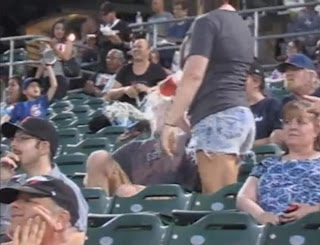 This morning I was laughing thinking how similar I was to some guy who shooed away his girlfriend from kissing him at a baseball game while the kiss cam was on them. He was on his cell phone and kiss blocked her. She raised her arms up, pointed at the kiss cam and he still didn't do anything. She then got up and poured a big gulp size soda over his head. I quickly looked in Mad's direction and said, "Would you do that to me?" And immediately, she knew who would be who in that scenario. "You'd be soaked if you rejected a kiss from me!" she said as she sipped her piping hot coffee. I didn't want to mess with her at that point. It's not that I'm not affectionate, it's just that I hate public displays of affection -- for straight or gay people. It's so unwanted by the public - it really is. I mean, granted, the kiss cam is cute, so I would totally make an exception. But would the kiss cam even swing our way? Would they even point it in our direction? Who would even guess that we're a couple? So, the odds are against that happening to us...thank God. From time to time I see the "possessiveness" in certain couples while we're out and about. Perhaps a guy has his huge arm wrapped around his tiny little girlfriend, giving off that, "SHE'S MINE" signal. And don't get me wrong, sometimes you just feel all 'lovey dovey', but in most cases, it's to ward off unwanted stares directed toward your other half. That's just my opinion and I'm sticking with it. Especially in front of friends -- why? Think about it - if there is someone that you may think is a potential threat or perhaps, just interested in your other half, I'll bet you anything you're gonna try holding your partner's hand or at least, sitting closer to them. Eh, it's human nature I guess. And sometimes it's like, "Here, take em' - they're all yours." (Not for me of course. I mean, yeh.) 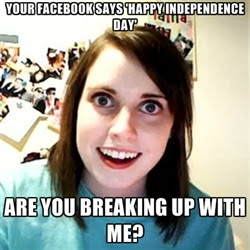 Which brings me to my next topic: FDA (Facebook Display of Affection). I mean, it should be "FDA" regulated so no one gets sick, but people do it all the time. People do it for the same reason: "THIS PERSON IS MINE!" And you can totally tell when someone is possessive over their partner or spouse by the way they post on their wall and...the way they post on their other half's wall, or on behalf of them. A good friend of mine found a girlfriend who he really fell in love with. She seemed nice, very attractive, but something was a bit 'off', but I couldn't put my finger on it. All of the sudden, his Facebook account was swamped with, "Oh baby I love you so much you're my soul mate," yada yada yada, and so it goes. I'm sorry, but when couples do this, most people think, "Why?" And although I'm guilty of posting a few lovey-dovey notes to my wife, usually during an anniversary or birthday --- beyond that, it's just 'knowingly' annoying to our friends. I totally realize that. As the red flags kept waving in the breeze, I noticed something else: she would comment on every single comment his friends would post, especially if it was an 'unknown' past female friend. Say he put a photo up of himself, and some old female friend from the past said, "Looking good, John!" -- The girlfriend would be right on her ass and reply with, "Yes he does and he's all mine ladies!"  Clearly, this other female commenter had no interest in John - she was just complimenting an old friend, as her profile picture shows her along with her husband and three kids. I mean, really? But it didn't stop there. That's when I stopped commenting on anything at all, in fear of the jealous girlfriend watching his account like a hawk. She probably has his password to boot. I wonder if he's even on Facebook. 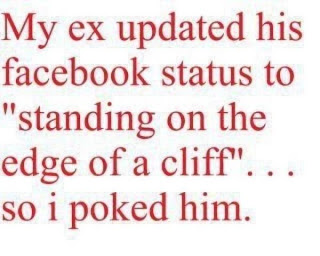 If you ask me, I think Facebook is the devil when it comes to relationships. I have seen old flames get back together, show their Facebook Display of Affection, and then, when they break up, and you're still friends with the both of them. You also see ALL. And what I mean is -- each one is publicly posting stupid quote photos to indirectly jab at their former lover. It's like Myspace all over again. Grow up. I also see them posting way too many photos of their "new loves" and posting up statuses that imply they are SO much happier now. If you really loved someone and you two broke it off, have some respect and keep it on the down low. But, in some cases where it was a vicious breakup and one of those 'battles till the end' --- this is the type of stuff that happens. And remember, we're all here to grab the popcorn and view it, because that's what good friends do....right? The worst part about this is, most of the people doing this have kids who are on their Facebook accounts! This is what really gets me. Your own kids are watching you post idiotic shit up for your ex to see. You're on the SAME level as your 13 year old. They have no clue. I once heard a kid who was 16 years old telling his friends, "Dude, you gotta see what my mom posts up. She acts like a heartbroken teenager on Facebook, it's so fucking embarrassing." This isn't the first I've heard of kids being completely humiliated by their parents' behavior on social networking sites. Now stop airing out your dirty laundry and be an adult, like me, who only posts a million photos of her Chihuahua and martinis. Yeah, I got my shit together. (I need help.)