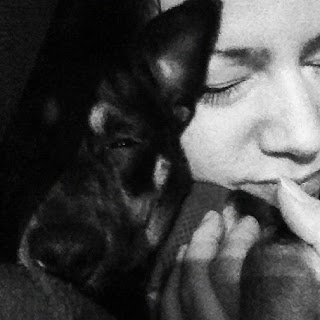 Sometimes I wonder if insomnia has a purpose. Maybe God's trying to say, "Come pray with me" or perhaps He keeps you up for five or more days just so you'll crash into your third rem stage in order to communicate with Him better. I haven't figured that out, but I found a few websites that fully believe in this god-driven method. Maybe it's a test, and let me tell you, if it's testing my lack of sanity and inability to maintain composure, then it worked. Let me just say what an irritable, cranky, over-emotional whack job I was during the six days I was awake. I had no filter. And I knew when it was coming on. By 10pm, we usually take the dog out for her last 'walk'. Then 11pm, I'm watching Seinfeld. This is my nightly ritual. Once it starts hitting midnight, it seems as though the numbers on the clock start flying off the handles. 1am, 2am, 3456 -WAKE UP! That's how fast it feels like. They say you should never look at the clock when you can't sleep, but I need to know how many hours I slept...or were awake for. Day 5, we had a BBQ. Madelene's sister Bernie came over. We had a blast, had a few drinks and ate dinner. But toward the evening, like 7pm (still early) I started phasing out and at that point - I was just bad company. I blazed up the fire pit and let the girls have some much needed sisterly time. I booked it upstairs and snuggled up with my dog and actually dozed off for about an hour. When Madelene and her sister came back inside, they both went to sleep almost right away, while I was up all. fricken. night. for no reason at all. Day 6 was scary. I snapped at anything and anyone. I snapped at my dog and she just looked at me like, "Whoa dude, I'm a dog. Get a grip." I found myself crying hysterically, to where my mom came over to me and rubbed my shoulders. I started laughing and said, "Stop doing that! The gout in your hand is gonna force us to make a trip up into the ER!" I just love her. I started feeling crazed, delirious and I seriously started hallucinating - not exaggerating either. A few times, I thought someone was walking past me. Another time, I'm just sitting there in a daze, and when I woke up, I thought I was in somebody else's house.  It was really scary.

Still on day 6 floating into the evening, I was scared that I was going to need some medical assistance at this point. I tried everything, from chamomile tea, deep meditation videos on YouTube, lavender on my nightstand, eating a bit of carbs before bedtime (which I have eliminated from my diet), and even a massage from Madelene which was w*o*n*d*e*r*f*u*l!!! I may fake insomnia all the time now. But, the one thing that worked? Ice cream. My sister suggested it and when I Googled it, there it was on a list of 'how to stop insomnia'. I'm not sure if it was the tryptophan or the inability of my liver processing all that sugar, but I slept like a baby last night. I feel like a human again. I've also been on this low/no carb diet that may have contributed to my loss of sleep. Not sure though. It's not Atkins and not quite Paleo, although I have been getting grass-fed, free range meat and organic veggies plus eliminating all sugars from my diet, but it's more so just cutting out pasta and potatoes. I'll leave that for a treat on the weekend. Within that week, I lost 5 lbs which I was thrilled about, but I was such a crazed lunatic walking around like a goddamn zombie all the time. What's worse? Gaining weight or insomnia?  But again, I'm not sure if the low carb diet is the evil culprit here. I have had friends email me, "What's bothering you?" And I can honestly say, "EVERYTHING!" --- But seriously, I can't pinpoint anything in mind. Of course, I'm still sad about Dad passing last year - but I have gone through the worst of it...I think. I recently installed a home security alarm system for our house so we could feel safer, which should make me sleep better, but that's not it either. I'm not at odds with anyone or feel upset about anything or anyone. So then what? It remains a mystery. The only thing I can think of is that it's some sort of somniphobia - a fear of sleep. I get sleep jerks a lot, which cause me to wake up gasping for air. Sleep apnea was ruled out, but this is just as bad.

I used to rely on binaural beats for sleep, but I'm a little scared of the side effects which can cause seizures and possibly do the opposite effect on different people depending on how the brain absorbs it. So that's out for me. If you have some unconventional home remedy (not alcohol or OTC medicines) then please let me know in the comment section. But for now, sweet dreams to all.