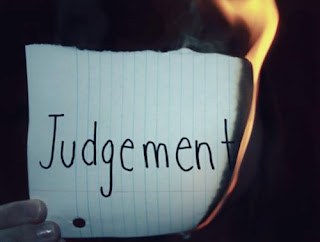 The best thing when I'm in a really great friendship is, there are no judgments, (unless they're hurting themselves, then perhaps an intervention), but aside from that, I've never been one to say anything about how someone else lives. What they do is their business. For me, friendship is about sharing yourself and being open and honest about who you are. No aires, no complications - just total acceptance of the person you are. Just like in relationships, nobody's perfect. We all have our 'thang' so to speak, and if that 'thang' isn't to be tolerated, then simply walk away. Simple. But why are some people so intolerant to other people's lifestyles? Years ago I had a friend absolutely appalled over the fact that I was married...to a woman. It baffled her mind that I could even commit such a "sin" and in her eyes, I was living a destructive lifestyle. I could have easily turned around and told her how destructive I think drinking an entire bottle of wine is every single night, or the fact that she has a bad habit of smoking -- but we all have our vices, so I didn't go there. I just said, "This is me, take it or leave it."  She left it.

One of the strangest encounters I have ever come across was meeting up with a friend at a restaurant. We were getting to know one another and having a great time so far. She had drove over an hour to come see me, so I took it upon myself to order a bottle of wine for us. When the waiter walked over with a bottle and two wine glasses, she capped her glass off and said, "Oh no thank you, I'll have coffee instead." I was a bit taken aback because she heard me order a bottle of wine. Did she think I was going to guzzle it down all by myself? Anyway, I didn't make a fuss and began to sip my delicious red wine, hoping that a "doggy cork" would come along with it after dinner. My friend leans over as if to tell me a secret. She says in a really low voice, "I'm in AA." My goblet went down and my eyebrows went up - not in a judgmental way, but in a guilty way. I felt so bad that I never asked her if she drank occasionally. I felt really inconsiderate, so I hid my goblet behind the bread basket for the rest of the night and stuck to coffee, as she did. As the evening went on, she began to badger me about how awful it is that I drink and how it will destroy my liver and can cause breast cancer. It went on and on and on as she drank her 5th cup of coffee and smoked her 20th cigarette. That's when I started getting a little peeved because -- how hypocritical of someone who has their own vices judge mine?

Then she leans over again to give me another secret. "When I used to drink red wine, it made me crave cocaine." Good to know. Pushed the goblet even further. As we hung out a bit longer that night, she kept chain smoking so much that I had to ask her why she smoked so much. She said it curbs her addiction. So basically, she replaced one addiction for another. The next time we went out, she started in with me again even before we were asked what we wanted to drink. I was seriously going to order a club soda, until she hit my last nerve. The waiter walks up and says, "What can I get for you two?" She orders her coffee, the waiter looks in my direction and I simply just. had. it. "A Ketel One straight up with 3 olives please."  I was done with people judging me left and right and especially people who have replaced their addictions with something just as bad. And I admit, maybe I should have not hung out with her in restaurants or bars, but she was the one who suggested it and wanted to go out to these places. The thing I have noticed with AA members (because I was there once for a 90 day 'clean out'), is that they all replace their addictions, and most of all, judge those who are occasional drinkers. Every meeting I had gone to, everyone seemed angry at the world around them - angry that people can actually control their liquor and not overindulge - and I get it - I really do - people have problems with drinking, but don't forget, there are people like me who don't have a problem drinking... I love it. Everything in moderation and less judgment would be the perfect set up for a healthy friendship.