Just like Valentine’s Day, I sometimes feel like New Year’s Eve is somewhat a forced holiday. It’s meant to rise up sales of restaurants and bars, and have people celebrate irresponsibly and kiss an unnecessary amount of people after the ball drops. I remember as a child my parents would hold these huge New Year’s Eve parties and when the ball dropped, every single adult wanted to give me these big wet & sloppy kisses. I ran like hell before the ball even made it down to “5”... But the one thing that gets me is all of those resolutions, and most of all, the expectations. They all lead to one thing: disappointments. My sister put it well while talking with her daughter. She said, “What’s your ‘goal’ for 2012?” Doesn’t that sound so much better? I think goals are so important - to dream about what you want, desire or to become. An unmet goal sounds so much better than a failed resolution. Many resolve to lose weight or exercise more. Why on the first day of January as you’re sitting home eating leftover munchies from the night before watching The Honeymooners? (Ok, so that’s what I did.) But what about say, April 4th? (I know, random.) Any day can be a new day. Just like Valentine’s Day, you can show love to your other half any day of the year. The florists are open all year round.

I’m going to have to admit that people were especially nicer on New Year’s Eve. Perhaps they were all looking forward to the festivities later on that evening, but when I walked into the stores, (especially the liquor store), I found that people were so incredibly friendly. One man saw me struggling to lift my box of wine (and no, not "box wine", but a box full of wines) and he immediately dropped all of his stuff and packed my goodies into the trunk of my car. He smiled and said, “Happy New Year to you!” And as he did, I debated whether or not to give him one of my twenty lotto tickets that I had stuffed in my pocket. Instead, I just said, “Thank you.” I’m getting cheap in my old age. But why can’t people be that nice on any given day of the week? Usually, they’re all muddling around grumbling about life and God forbid you bump into them - they sneer and snarl at you as if you were Satan himself. No, “Have a nice day” or “Pardon me” - and then again I think, maybe it’s because I live in New York...? If you bumped into someone in Savannah, GA, I’d reckon ya’ll would be seeing a different story. You bump into them and they’d help you dust yourself off. Not sure where I instantly gained a southern accent there. I’m coveting now. 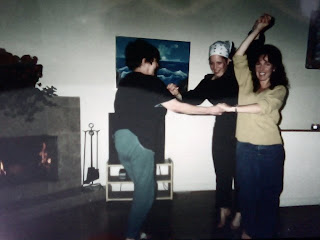 The one thing I always notice is, whenever I have a “planned” party, it seems a bit subdued and quiet - not crazy, funny and silly like my usual spontaneous gigs. Every time I have an unexpected event, it’s usually the best ones ever. Again, I think it has to do with expectations and then being slightly disappointed in the results of it. But nonetheless, I had a nice quiet evening, although I was a bit under the weather. In fact, I didn’t even drink. I held a glass of wine around the entire evening and then at 12 midnight, shared a bottle of champagne with my wife watching the ball drop. Oddly enough, we stayed up till 3am and had such a great time together. Madelene never gets bored. She is happy ‘where she is’ - where I get bored at the drop of a hat. She is happy anywhere. I wish I had some of her qualities. It must make life a lot more easier, rather than to be grumpy and disgruntled over busted plans. I remember we went to The Hamptons and rented out this luxury condo. (The photo on the left is my mom, myself & my sister.) We brought my parents and my oldest sister with us. The first day it was sunny, 80 degrees and beautiful. We were so excited to spend time on our deck overlooking the beach and just relax for one entire week. But when nightfall began, it started to rain and ended when we left. While in the midst of these side-swiping torrential rains, Madelene was holding up her glass, turning up the music and dancing around. My sister and I were on the couch...disgruntled and bored to tears. My parents were doing their thing, cooking, eating and somewhat content. But my sis and I? We were gonna pull our hair out. My sister looks at me, while she’s watching Madelene dance around with a cocktail in her hand and says, “She’s gonna live past 100 - I can feel it.” Even when Mad expects “this” and gets “that” - she’s accepting it and making the best of it. We eventually joined Madelene in her solo festivities. It wasn't so bad after all.

Maybe that’s a resolution I should make: making the best of life. Doesn’t sound so shabby, but is it realistic enough for me? And if I make a resolution like “losing weight” or “exercising more” - I instantly gain weight and become increasingly inactive. It never ceases to amaze me. In any event, I hope your New Year’s resolutions, or “goals” reach your expectations, or perhaps, you can make the best of what comes out of it.