Amanda Cummings: No Proof of Being Bullied

Back in 2007, I had made a Youtube video called, “Suicide Prevention”. Although the video is more on the darker side, it does send a positive message. It got almost 100,000 hits, full of comments from kids all over the world trying to talk other kids out of suicide. Definitely read the comments on the Youtube page itself. It's disheartening. The video lets you travel into the mind of a deeply depressed person, so you’re going to see some disturbing images. Between the images and the lyrics to the song, you can actually feel the sadness that some kids go through and what some adults go through...as well as what I went through. When a person with depression goes into (what I choose to call it), their dark side - they drift into this deep hole of insecurities, self-loathing as well as resentment for everyone around them, including the one who broke their heart. As adults, we never think seriously enough when a teen (whether our own kid, relative or just in general) gets their heart broken. We think it’s just puppy love. Think back when you were around Amanda’s age. I will never forget the time my boyfriend was on his way over my house so that he could break up with me. I was 16 years old. I remember every single detail. I went into the kitchen to grab some water and while holding the glass, my hand was shaking so much because I knew what was going to happen. And when it did? ....... I. was. a. complete. wreck. I not only got emotionally sick, I got physically sick. My friend was so concerned about me that she brought along 15 other classmates/friends to console me for the rest of the day. I wanted to commit suicide. I didn’t want to live without him. My life wasn’t worth living. I’m worthless. I’m not good enough, and so on and so on... I’m freakin’ 16 for the love of God! If I could just slap that person who was once me in the face to snap out of it ---I would. 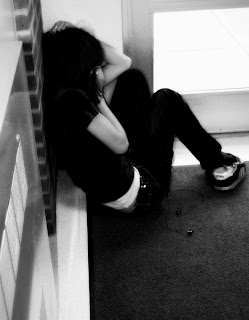 These days, you hear more and more about bullying. Kids are cruel as they always were, but with technology, their cruelty has a tool to enhance it to a whole new level. On the news this morning, they were saying that there was no proof of Amanda Cummings’ attacks; no proof of being bullied. It doesn’t make it any better, but it does bring some sort of awareness of what teens go through, which adults may not see, or may not want to see. Reports say that Amanda’s uncle made reports of Amanda being bullied, which seems to be the theme of many teen suicides these days, but now it’s come out of the woodwork that there is no proof of her bullying, and more proof of her deep seated depression. She was hospitalized for cutting, which is a common thing among kids who don’t want to feel the emotional pain, but choose a physical pain and cut their arms, shoulders or chest with a sharp object. I personally never understood this method of coping...or is it coping? Amanda's suicide note had no complaints about being bullied or harassed, but instead, had statements such as, “I’m sorry I got between you and Becca’s friendship” - to a boy she was interested in. “I don’t deserve to live,” was on the last page of her suicide note. They said she went through horrific episodes of depression with each heartbreak. She just didn’t handle them well. (But really, who does?) I just wish her family or friends would have said something if she made claims that she no longer wanted to live. If a kid has already been hospitalized for this already, why not keep tabs on her well-being? Or maybe they have. Some people as much as they love their child, sister and friend -- they just can’t do anything to save them. At that point, it’s all about prayer and faith.

As I remember so clearly as a teen wanting to take my own life, I made suicidal threats so that someone could help me or save me. It was a cry for help. I wanted to be heard and most of all, saved from my own mind. I even went to extremes, raiding my parents’ liquor cabinet drinking as much scotch iced-teas (oof) as I could just to poison myself. Thank God I made it out alive after waking up getting sick and having someone throw water on my face. I remember. I can tell you every. single. detail, because for me, as a teen, and what I was going through - it did matter. It wasn’t “puppy love” - it was my entire well being at stake just because my heart was broken.