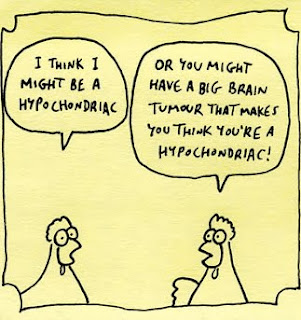 The hypochondriac was a regular in the emergency room -- so much so that when he didn't show up for a week, the staff took notice of his absence. He finally did show up again, and one doctor said, "Long time, no see. Where have you been?" "Sorry I couldn't make it in," the hypochondriac said. "I was feeling sick."

There are some people in my life who think all my medical issues, ailments and whatnot are ‘all in the head’ - that I’m a hypochondriac, and although that may very well be true, I still plan on engraving, “I TOLD YOU I WAS SICK” on my tombstone. For instance, one night I had chest pains. It felt like what everyone described it as: an elephant sitting on your chest. Then, the pain radiated down from my jaw (a known symptom) and straight down into my left arm. Of course this all seems to happen at midnight and Madelene hops into her jeans and carts me off to the ER. Being in a constant state of hypochondriacal alertness, needless to say the emergency room staff knows me well. “Hey Deb!” Then they whisper and sometimes, you can hear them say, “Give her the usual”, as if I were a regular customer at some rundown diner. The nurses greet me, smile, gently walk over to me as though I was some lunatic and then, take my vitals, smack on about a dozen sticky things for the EKG machine and then roll in this huge chest x-ray machine. (The overuse of the x-ray machine leaves me thinking about too much radiation of course....another mania.) After the blood work to see if anything actually did happen, the doctor comes in about four hours later. And with each visit, he seems to be taking more time. I guess that’s a hint. They all give me the same blanket diagnosis, just like when you get an infection on your hand or foot - they all label you with a “spider bite”.

“You have costochondritis, which is an inflammation of the cartilage that connects a rib to the breastbone. It mimics symptoms of a heart attack. You’re fine. Your heart is in great shape. Take a couple of ibuprofens and rest up.” Although it’s a great relief to know it wasn’t my heart, it makes me wonder how many more times do I have to keep attending these ER functions. What if I ignore the symptoms of a heart attack, which for me is this “costochondritis” thing? Many of times, I come in with an allergic reaction. My tongue swells up where I can barely talk and they just wanna throw a buncha’ steroids into my system. I always refuse the steroids and end up popping two Benadryls, but the fact is - I hate taking Benadryl because get this - I “think” I’m allergic to it too. It gives me heart palpitations and it does NOT make me drowsy - it does the opposite. It gives me anxiety where I cannot sleep for almost two straight days. I even carry an EpiPen in my purse. This particular mania started when Madelene and I went out for sushi and both of our tongues swelled up to the point of us lisping every word. We had to get the EMTs to help us because we were experiencing such severe reactions. So it wasn’t “all in my head”, because Madelene had it too. (Yes, this strangely made me feel better.)

Today I have an appointment with the allergist. My biggest fear is the allergy testing. They poke you with whatever they think you’re allergic to, and your skin is supposed to rise up if you are allergic to it. It’s supposed to be a slight reaction, but my fear is, what if later on that “slight” reaction becomes a bigger problem with the slew of allergens that are injected in me? See how my noggin works? They say that for extremely allergic patients, they can actually get anaphylactic shock while being tested. So I’m opting out for the skin testing and doing blood work instead so that they can find out externally and let me live in peace. The doctor ensured me that everything is done in a controlled environment and I have nothing to worry about. Then there’s the internet. What an awful source for information when you’re freaking out about something regarding a medical crisis...or perhaps just having a hypochondriacal episode. In fact, the worst thing to do while you’re having chest pains, allergic reactions or any other medical condition is to Google it. There are a bunch of nimrods out there that’ll scare the living daylights out of you. I once had these sharps pains radiating from the lower right side of my abdomen. I went online and found a message board with a bunch of people complaining about the same thing. One person scared the crap out of me and said, “If you don’t get to the ER fast enough, the poison in your appendix will kill you!” So guess where I ended up fifteen minutes later? Yep. And the results were: a small cyst on my ovary that’ll eventually burst in a couple of weeks. No biggie. And mind you - it was nowhere near my reproductive area - it was exactly where ...umm... Google said it would be. 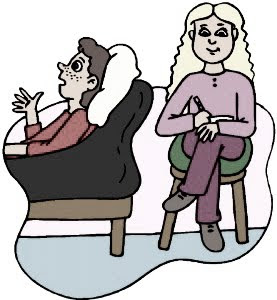 And to add onto to this, my own therapist gave me advice. She said, “Turn up the radio.” I was puzzled. She said, “Whenever you feel a ‘symptom’ coming on ---simply turn up the radio and ignore it. It’s your body’s way of trying to get attention. Once you stop paying attention to it - it’ll move on. Just like a baby will throw its bottle on the floor over and over again to get the mother’s attention. Once the mother stops picking it up, the baby will most likely refrain from doing it again.” Interestingly enough, I took her advice. I had chest pains one night, looked at Madelene and smiled. “Nope. Not going to the ER.” She looked concerned and yet, relieved. It got worse and worse and I held my chest saying to myself, “It’s just muscle inflammation or something weird...” And yes, it did go away. But what if, within those minutes it was actually a heart attack? (I guess I wouldn’t be typing right now.) The doctor in the ER always tells me, "When in doubt, check it out." Then my therapist tells me, "We have to stop entertaining our neuroses.” How can someone not respond to a potentially dangerous pain? I guess I’ll just leave it in fate’s hands.